Stowe, the queen of Vermont ski villages, has been a favourite among Montrealers since the middle of the last century. Always a manageable drive for a weekend of skiing, those preferring the long, steep ski trails of Mount Mansfield and Stowe’s New England village ambience took up ski chalets there. Some preferred the comfort and service of resorts like Topnotch Resort, for six decades Stowe’s go-to accommodation a few minutes above the village center and a short shuttle ride on to the ski lifts. 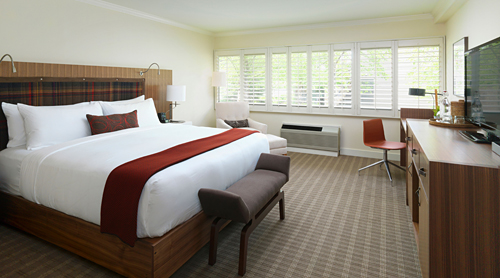 A newly renovated deluxe room with a king bed

Owned for many years by Montreal’s Cummings family and now one of Benchmark Hotels and Resorts’ Gemstone collection, Topnotch remains a top choice among visitors to Stowe. An easy interstate-highway drive of less than two-and-and-half hours from downtown Montreal, the resort rated Double-Diamond by AAA, has 68 guest rooms and suites, many with panoramic views across the valley, that line the upper floors of the large main lodge, offering easy access to the dining, bar, spa and meeting rooms. In addition, there are 22 guest houses on the property, each with two or three bedrooms, a large living room with fireplace, and a fully equipped kitchen.

Location and low-key luxury aren’t the only reasons for the resort’s ongoing reputation as a jewel in Stowe’s crown. A world-class spa and superb cuisine set it apart from the many inns and resorts that line the mountain access road.

The spa includes 33 treatment rooms, lounges, gym, Jacuzzis and indoor pool/solarium spanning over 35,000 square feet. More than 120 rejuvenating services are available, including a half-dozen signature treatments, such as the Mount Mansfield Saucha, comprising three levels of herbal massage, and the out-of-this-world relaxing Little River Stone Massage, which combines hot and cold stone applications and aromatherapy. The stones serve to calm the body, while the oil blended with pine, eucalyptus and lavender release body tension and produce a dreamy peace. The stones are from the bed of the Little River that runs from Smuggler’s Notch through the Topnotch grounds, and are returned to the river every three months so that the energy within may be restored. 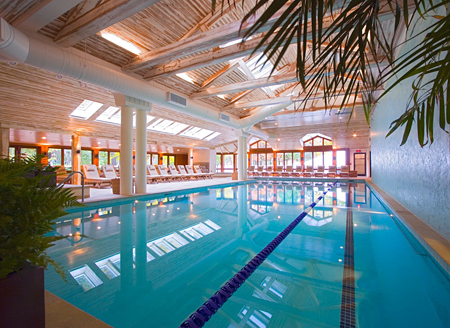 The spa estheticians use Naturopathica brand products, which are based on natural ingredients including plant extracts, probiotics and seed oils to fight muscle inflammation, and plant stem cells, retinols and peptides that correct and prevent skin damage. These products are free of parabens and other skin-allergenic and irritating ingredients used in non-natural skin products.

The ideal complement to a relaxing massage or other spa treatment is to soak in a hot tub or relax on a lounge chair – as opposed to an immediate visit to The Roost bar, for which this writer opted. In my defence, it was happy hour – and bartender Don Horrigan makes a mean Old Fashioned cocktail. In addition to an array of creative cocktails, there’s an impressive selection of Vermont craft beers, and some interesting wines by the glass. One of Topnotch’s two restaurants, The Roost is the more casual of the two and is a bonafide gathering place for resort guests and local residents alike, drawn to the food, drink and live music.

Both The Roost and Flannel, the main dining room, are under the supervision of executive chef Adam Noë. Originally from Tennessee, he worked in several Florida kitchens before moving to Stowe about seven years ago for the lifestyle and environment – and access to fabulous cooking ingredients from Vermont’s productive landscape.

The Roost, just off the front lobby, offers smaller plates and shareable appetizers, in a laid-back open-concept room with various seating areas and a large fireplace, all anchored by a long bar. The space extends outdoors, with a large terrace and fire pit that provides après-ski warmth regardless of the air temperature. Menu favourites here include pulled pork, Cabot cheddar fondue, Pico de Gallo, jalapeño and spicy aioli, and, for the bigger appetite, a maple BBQ burger with Vermont bacon. 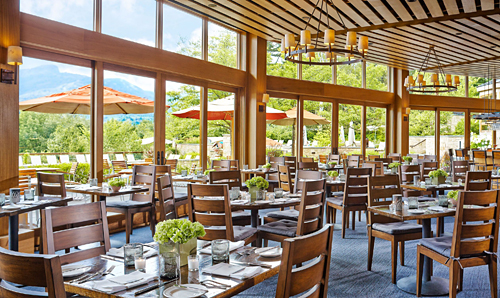 With a spectacular view of Mount Mansfield, Flannel Restaurant is the place to experience Stowe cuisine at its finest under the
direction of Chef Adam Noë

To experience the full breadth of Chef Noë’s talents, head to the other end of the main lodge and Flannel. Affording a spectacular view of Mount Mansfield through soaring windows, this is the place to experience Stowe cuisine at its finest. Cooking prowess and fine local ingredients combine to produce a wonderful selection of meat and seafood, accompanied with fresh Vermont produce.

A Flannel highlight is Statler chicken, comprised of a seared boneless breast with wing drumette attached, from Misty Knolls Farms. It’s garnished with Madeira caramelized onions, crispy brussels sprouts and pickled raisins. “We use the sous-vide method to cook the chicken – herbs, garlic, oil and chicken in a cryovac bag cooked in a water bath at 147F for 2 hours,” Noë explains. “We then pan roast it to obtain the crispy skin. This imparts all of the flavor into the meat of the statler, and makes for an extremely juicy bird.”

Among starters, not to be missed is Noë’s scallops, garnished with butternut squash and chorizo hash, frisée herbs and lemon vinaigrette. Other highlights from recent menus include berbere spiced lamb (cucumber arugula salad, pomegranate seeds, roasted carrots and garlic yogurt sauce) and autumn pappardelle (house-made pappardelle, butternut squash, greens, heirloom tomatoes and maple sage butter). You will be tempted to complement your meal with a selection of charcuterie or Vermont cheeses.

Breakfast is served in Flannel and has something for everyone, from a berry parfait to steel-cut oats to the spectacular and enormous Flannel Hash – not to mention buttermilk pancakes with Vermont maple syrup. 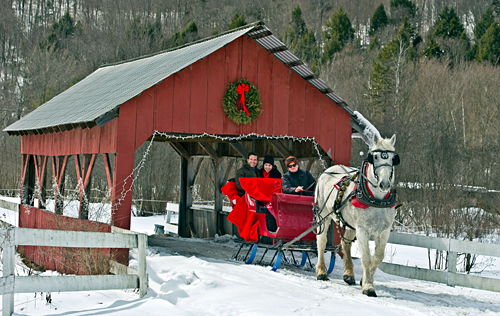 How about a romantic sleigh ride while visiting Topnotch Resort

While skiing is the main winter pastime for Topnotch guests, the resort is renowned for its tennis centre. The facility, which includes four indoor courts and six outdoor, is consistently ranked among the top 10 tennis resorts in the United States. More than 30 programs of lessons and clinics and for all ages and levels follow Topnotch’s “Play to Win” philosophy that focuses on the three critical areas of tennis: strategy, technique and footwork.

Other activities, for which equipment is available for rent or purchase at Mountain Ops Outdoor Gear on the property, include cross-country skiing, snowshoeing in winter, and cycling (road, trail and mountain), inline skating and fly fishing. Sleigh rides also are offered by the resort, and there are cross-country-ski and hiking trails on the property, not to mention an extensive network throughout the Stowe area. For the hardiest hikers, the Long Trail, which follows the ridge of the Green Mountains, is accessed within Smuggler’s Notch, a few miles to the north.

There are a number of accommodation packages that will entice Montrealers for a weekend or week of winter rest and recreation, including deals that include skiing, dining, spa services.

Topnotch is also a popular venue for social and business gatherings, with 9,000 square feet of event space that includes a ballroom, flexible meeting rooms and extensive outdoor areas, which can accommodate and cater up to 250.

How to get there
Take Autoroute 10 east to exit 22, then south on Autoroute 35 for for 45 kilometres, past Saint-Jean-sur-Richelieu, to the end at Route 133. Follow 133 south for 17 km to the border crossing at Highgate Springs, VT. Continue on Interstate 89 south for 107 km, past Burlington and on to exit 10 for Stowe-Waterbury. Turn left on to Route 100 north, and follow 100 for 15 km past the Ben & Jerry’s ice-cream dairy to Stowe. In the middle of town, turn left onto Route 108 north. Topnotch is about 6 kilometres up 108, on the right. 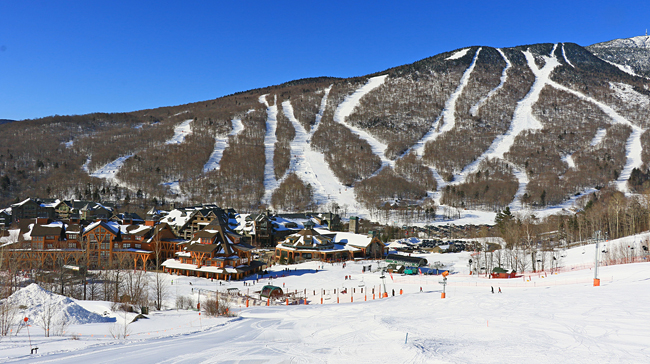 Skiing in Vermont and Stowe are synonymous. As one of North America’s oldest alpine ski venues and situated on the state’s highest peak, Mount Mansfield, this comes as no surprise. Skiing in crude form at Stowe dates back a century, and the first lift to the summit opened nearly 80 years ago. 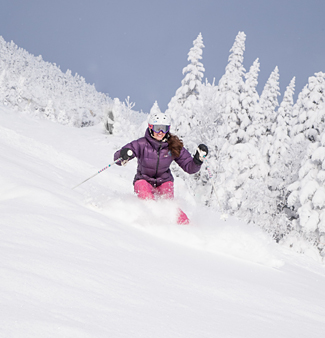 Stowe offers runs for beginners to
powder for expert skiiers

Today, Stowe Mountain Resort (www.stowe.com) has 116 trails covering 485 skiable acres dropping 2,360 vertical feet, including iconic originals such as the Toll Road (built as a cart and automobile road in the mid-19th century), Nosedive and National. The first purpose-cut run on Mansfield, the Bruce, cut in 1935, is now a challenging backcountry run. Its 12 lifts include a high-speed gondola, four quad chairlifts, two triples, two doubles and two surface lifts. A second gondola. aptly named Over Easy, provides a fast transfer between the resort’s two base areas, Mansfield and Spruce Peak, crossing the mountain access road, Route 108.In recent years, Stowe Mountain Resort has transformed Spruce into the resort’s main base area, which includes restaurants, boutiques and the new Stowe Adventure Center and outdoor skating rink. The $30-million Adventure Center is the base for children’s and family activities. It includes a daycare, children’s ski/ride-school and a family-oriented restaurant. The building also houses Stowe Rocks, an indoor climbing center. Spruce is also where you will find slope-side accommodation, at Stowe Mountain Lodge and numerous condominiums. 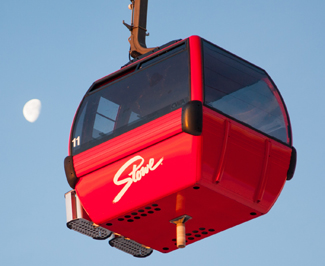 The high speed gondola is one of
12 lifts

There are plenty of places to eat at the Spruce base, including The Great Room Grill, Skinny Pancake, and a number of restaurants in Stowe Mountain Lodge. Over at Mansfield, you’ll find the original base lodge, a throwback to an earlier era at the foot of Stowe’s original classic trails. It has down-home atmosphere, including The Den bar with live après-ski music. There are three on-mountain lunch spots: the venerable Octagon atop the main Four Runner quad; the Midway, part way up the gondola; and Cliff House at the top of the gondola (also open for themed dinners on select Saturday evenings).

Stowe, long owned by American International Group, Inc. (AIG, a financial-services corporate giant), was acquired by Vail Resorts Inc. last year. Not only does this promise continued enhancement of Stowe’s on-mountain facilities, it brings with it the EPIC season pass (www.epicpass.com) that provides unrestricted access to Stowe as well as 11 top-drawer resorts elsewhere in North America. This includes Whistler Blackcomb, also acquired in the past year by Vail Resorts.

EPIC offers surprising value in this era of pricey lift tickets. For less than $900 U.S. (if purchased ahead of ski season), you can ski Stowe, a reasonable drive from Montreal, all season, and also vacation out west. Among the other EPIC resorts are Vail, Beaver Creek, Breckenridge, Keystone, Park City and Heavenly. The pass also offers limited access at 30 European resorts, among them: St. Anton and Lech in Austria; Verbier in Switzerland; Courcheval and Val d’Isère in France; and Madonna di Campiglio in Italy’s Dolomites.