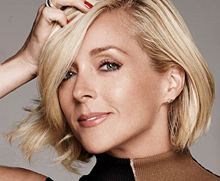 Jane Krakowski is most commonly known for her role as Jenna Maroney on NBC’s Emmy Award-winning 30 Rock. Krakowski received four Emmy nominations for her role, a collective 2009 SAG Award for Outstanding Performance by an Ensemble in a Comedy Series, and additional nominations in that category in 2013 and 2014. She was first introduced to the TV mainstream with her Golden Globe-nominated portrayal of Elaine Vassal on the Emmy, Golden Globe, and SAG Award-winning Ally McBeal. Most recently, Jane reteamed with her 30 Rock collaborators Tina Fey and Robert Carlock for the Emmy nominated The Unbreakable Kimmy Schmidt for Netflix. Her role as Jacqueline Vorhees earned her an Emmy nomination and a Critics’ Choice Award.

Her other television guest starring appearances have included shows like Modern Family, The Simpsons, American Dad, Younger and even Sesame Street.

She is a Broadway veteran, receiving a 2003 Tony Award for her portrayal of Carla in the Broadway musical Nine.

In 2012 Krakowski released her solo debut album, The Laziest Gal in Town, and in the same year, performed a one woman cabaret act to a sold out crowd at NYC’s legendary Town Hall Theater.