Bold new Biomuseo of Panama was designed by Frank Gehry, one of the world’s most renowned architects
Photo: Fernando Alda

With teeth bared and massive haunches poised to attack, the dire wolf towering above me is so huge it makes the wolves on Game of Thrones look like chihuahuas. I’m at the Biomuseo (Museum of Biodiversity), a striking new addition to Panama City’s cultural landscape. The first building in Latin America to be designed by celebrity architect Frank Gehry, the sculptures within its Great Exchange gallery offer insights into the Isthmus of Panama, a land bridge connecting North and South America that once allowed the migration of animal species including the now extinct dire wolves, mammoths and sabretooth cats. The Biomuseo is just one of many draws in Panama’s ever-evolving capital city. Its striking mix of natural beauty, cosmopolitan style and Latin-infused culture makes it one of the world’s hottest new travel destinations. 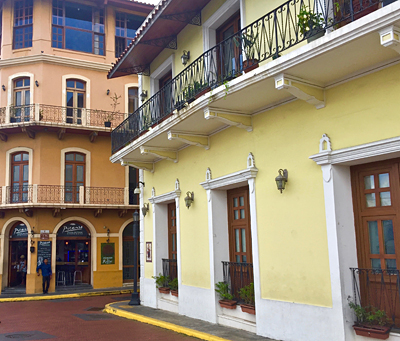 From the Biomuseo that appears to tumble like a colourful Rubik’s Cube along the Amador Causeway, to the gleaming F&F skyscraper, Panama City’s skyline offers plenty of modern drama. Its architectural past can be explored in the cobblestoned streets of Casco Viejo, Panama City’s Old Quarter, a designated UNESCO World Heritage Site. This pocket of beautifully restored buildings overlooking Panama Bay includes highlights such as the convent of Santo Domingo, the facade of La Merced Church and the Iglesia de San Jose, featuring a massive mahogany altar covered in gold leaf that’s one of the few relics to survive the sacking of Old Panama by English pirate Henry Morgan in 1671.

Evenings, Casco Viejo shakes off its sleepy atmosphere and offers a thriving nightlife of bars, restaurants and open-air cafes. A number of up-and-coming restaurants include several specializing in Peruvian, Colombian and other Latin American cuisine. Top spots for cocktails include tiny Ego y Narciso on Plaza Bolivar and the atmospheric Lobby Bar at the restored American Trade Hotel, where bartenders serve the city’s best gin and tonic in 1920s era style.

Monkeys, Rainforest and the Panama Canal 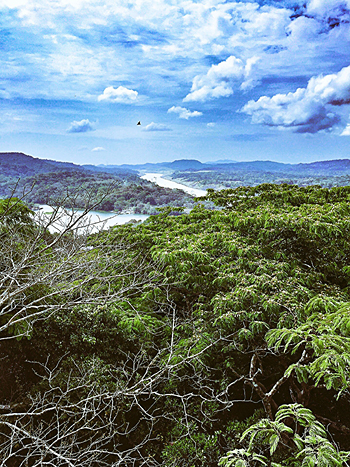 At the Gamboa lookout visitors can see
views of the vast rainforest
Photo: Jaden Gonsalves

Another must-see stop is the Miraflores Visitor Center on the Panama Canal, the 77-kilometre channel linking the Pacific Ocean and the Caribbean Sea. This herculean engineering project was begun by the French in the 1880s, completed by the Americans in 1914 and expanded in 2016. Since opening, more than one million ships have maneuvered their way through the Panama Canal lock system and it’s possible to witness the transit of ships through the locks from the Visitor Center’s outdoor observation deck.

Yet the Panama Canal is much more than a marvel of engineering. Launch into its lush natural beauty at the Gamboa Rainforest reserve at the southwest end of Gatun Lake where it meets the Chagres River. Once the headquarters for canal dredging operations, the Gamboa base camp is now a hub for adventures into a vast rainforest alive with birds, monkeys, iguanas and sloths. 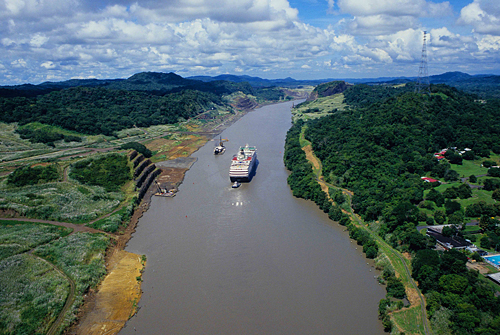 Learn about the Corte Culebra, the 8.75 stretch of the Panama Canal that required excavation from Gamboa to Pedro Miguel
Photo: Tourism Authority of Panama

Adrenaline junkies should opt for the Gamboa Combo Tour, a full day of adventure that begins by gliding through the forest canopy via aerial tram, followed by hiking to an observation lookout featuring 360-degree views of the Chagres River and jungle. The day wraps up with a boat safari along the river through the backwater mangroves of Lake Gatun, habitat to many of Panama’s seven species of monkeys, including the critically-endangered black spider monkey. Tour participants should keep their cameras ready. 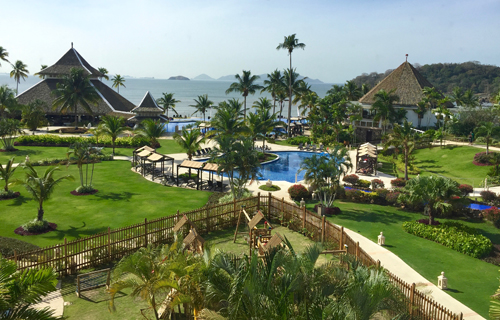 A highlight of a stay at Dreams Playa Bonita is watching ships as they move through the
Panama Canal on the horizon
Photo: Michele Peterson

It would be a shame to visit Panama without spending time on one of the beautiful beaches dotting its coastline. You don’t need to travel far. Panama City is home to Playa Bonita, a sweeping crescent of palm-fringed sand located across the Bridge of the Americas. Playa Bonita once served the recreation needs of Fort Kobbe Military Base but is now best known for its impressive tides, rainforest trails and luxury resorts. At low tide, the receding Pacific Ocean leaves rivulets of water and tidal pools perfect for scouting for sand crabs, seashells and other marine life. 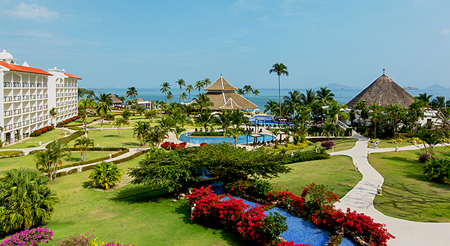 Tucked into the bay’s southern shore is the 307-room Dreams Delight Playa Bonita Panama, a luxury resort where eco-adventures include kayaking, beachcombing and archery lessons. During the resort’s guided morning hike through the rain-forested peninsula, guests can expect to see sloths, monkeys and even tarantula nests. The resort’s new Defined Delights concept, launched in May 2017, offers the conveniences of an all-inclusive vacation with the flexibility to enjoy off-property adventures via the hotel’s shuttle to Casco Viejo and Albrook Mall, a leisure and shopping centre that’s the largest outside Asia. Don’t miss the weekly Panama Cultural Evening, an extravaganza of local dishes and traditional dance.

From world-class museums to thrilling outdoor adventure, Panama’s capital city has much to offer.

Michele Peterson is an award-winning travel writer who specializes in food, drink and sun destinations. Her work has appeared in major magazines, guidebooks and travel anthologies. Get travel tips, inspiration and recipes on her A Taste for Travel blog and via Twitter/Instagram @atastefortravel.