The bold bright colours and repeating musical motifs that are hallmarks of Marc Chagall’s work are on exhibit at the Montreal Museum of Fine Arts. Paintings, costumes, sculpture, ceramics, and stained glass – in all, almost 340 pieces spanning his long and prolific career. This remarkable exhibit highlights Chagall’s art through a prism of music. Adding to the immersive experience, corresponding music plays in the first few galleries.

Chagall was born in a small Jewish community on the outskirts of Vitebsk, Russia (now in Belarus) in 1887. The rural and religious sights of Vitebsk would appear in countless paintings done throughout his life.  In the third exhibit room, Self-Portrait in Front of the House shows a formally attired Chagall in his rustic hometown. Portraits of his mother, father and fiancé Bella hang alongside. Stylistically, these paintings are all quite different from each other, as the young Chagall explored some of the many techniques of his oeuvre. The painting of his brother, David with a Mandolin expresses a very jazzy 1920’s feeling, though it was produced in 1914.

Life and Death on the Canvas

A prime example of Chagall’s use of fauvism and cubism is found in his painting Birth. In the same room, you will find the piece considered to be Chagall’s first masterpiece. The Dead Man illustrates an actual event that happened in Vitebsk. A dead man lies in the street, his distraught wife pleads for help and a lone fiddler views the scene from his seat on a rooftop. The text, to the left of the painting, describes the setting in Chagall’s own words. 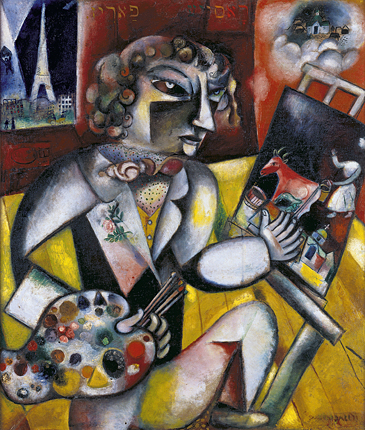 The motif of a fiddler on the roof reappears throughout Chagall’s works, including a piece on the opposite wall entitled The Green Violinist; and apparently inspired the title of the 1964 musical “Fiddler on the Roof”.

“My family belonged to the Hasidic community. Music and religion played a major part in the world of my childhood and left a deep impression on my work, as did everything that belonged to that world.” – Marc Chagall

Two very interesting paintings are located in the far corner of the room. The first depicting Chagall and his wife Bella is Lovers in Grey. Shown in profile, Bella seems to be very protective of him as his head rests on her arm. While, Self-Portrait with Seven Fingers shows a cubist rendition of Chagall working on a painting, his palette full of paints, several brushes at the ready, and a window framing the Eiffel Tower. On his left hand, the seven fingers are a reference to a Yiddish saying, “whereby to do something with seven fingers means to do it very well and with all one’s heart.” 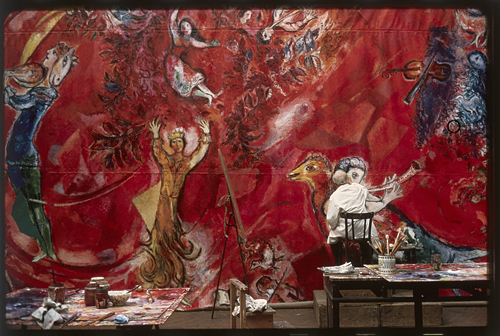 Exhibit rooms are devoted to each of the three ballets for which Chagall designed the sets and costumes: Aleko (1942), The Firebird (1945) and Daphnis and Chloe (1958-59). Odd, exotic and fanciful costumes take pride of place in the center of each room; and colourful matching preparatory sketches line the walls. Aleko was based on a poem by Pushkin and The Firebird on an old Russian tale, whereas the third ballet was based on an ancient Greek romance. Unlike the costumes for the first two ballets, the Daphnis and Chloe costumes are made of light and airy fabrics, setting a far more pleasant atmosphere. Chagall, an ardent admirer of Mozart, also designed the costumes and sets for The Magic Flute (1967), performed by the New York Metropolitan Opera.

In a small side gallery, alongside a few other pieces, hangs a striking painting. Dusk, was completed during WWII while Chagall and Bella sought refuge in the United States. It is another painting of the loving couple, but this one shows the bleak hardship of living in exile from their beloved France. Chagall’s palette is colourless and the faces of the couple are shown in the blue, white and red of the French flag.

In the latter half of Chagall’s life, he began exploring different mediums for his art. A few of his ceramic works are displayed, as are some brilliant glass pieces. Many of his stained glass creations depict biblical scenes and grace churches and synagogues. He made a large piece for the Cathedral of Metz, entitled Jacob’s Dream; a second version of this subject is shown in the exhibit. The scene has angels ascending and descending the ladder to heaven, while Jacob reclines at the bottom. Glowing red, gold and blue, the piece is a continuation of Chagall’s love of colour. 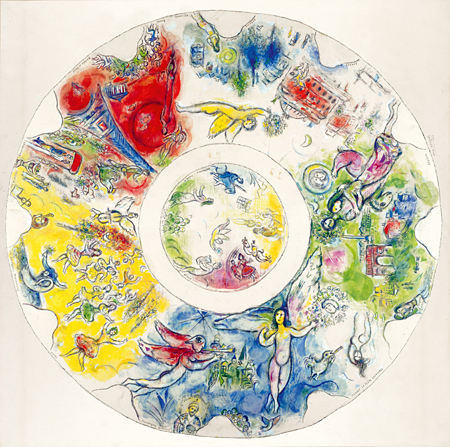 My first introduction to Chagall was at the Palais Garnier opera house, in Paris. Beyond the grand marble double staircase, in the ornate auditorium, surrounded by red velvet and gilding is Chagall’s famous ceiling. My first instinct was to think that it was out of place, too modern and whimsical for the setting. But thanks to this exhibit my appreciation for the work has deepened. The exhibit includes a high-definition projection of the ceiling, offering an amazing opportunity to view close-up details of the piece.  Like flower petals, five predominant colours ring the center circle. Each of the colored “petals” is devoted to two composers: white for Rameau and Debussy, red for Ravel and Stravinsky, yellow for Tchaikovsky and Adam, blue for Mussorgsky and Mozart, and green for Wagner and Berlioz. The center is dedicated to Beethoven, Gluck, Bizet and Verdi. The people, animals, and monuments of Paris depict key works from each composer. The projection reveals how Chagall took a multitude of imagery, delineated areas for 14 composers, and still managed to create movement, blending each section seamlessly into a continuous piece.

Well over 200,000 visitors have already crowded the exhibit halls, eager to see some of Chagall’s greatest masterpieces. As you make your way through the exhibit, take notice of his joyous use of colour, nods to musical influences and the fish, roosters and other animals that he so often portrays with a human eye.

Chagall: Colour and Music runs at the Montreal Museum of Fine Arts until June 11. For information about hours, admission prices, and accompanying musical performances at Bourgie Hall, visit: www.mbam.qc.ca