Yearning to play out your National Geographic fantasies and explore the mysteries of the deep? In The Bahamas, you won’t need a submarine: its warm cerulean waters are home to hundreds of captivating “Blue Holes.” Though endowed with an almost mystical appearance, these circular areas of dark blue water are actually the entrance to aquatic sinkholes and underwater caves. The Bahamas can claim more of these natural formations than anywhere else in the world, with the Island of Andros in particular boasting over 200 off its shores. Blue Holes are a paradise for divers, flush with compelling geological formations including stalagmites, sheer limestone walls and dazzling mineral formations.

To swim in these mythical bodies of water is to step back in time and experience the geology of the past suspended beneath the waves. Though mythical in character and immortalized in more than a few Bahamian legends and tall tales, the truth of these Blue Holes is that they are apt to leave even the most veteran diver speechless.

If you fancy experiencing this one-of-a-kind underwater odyssey for yourself, here are some of the best Bahamian islands where you can swim, snorkel, dive or hike to a Blue Hole and experience its mystery. 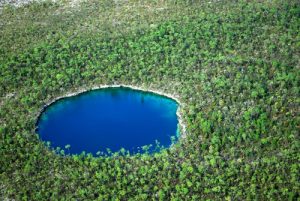 The Island of Andros: As mentioned above, this island has more than 200 Blue Holes and is something of a holy grail for divers looking to explore these caves. Thousands of divers from all around the world flock to this island to get a taste of the unknown. However, most of these Blue Holes situated offshore are not exclusive to experts. Two of the most popular activities are snorkelling the surface of a Blue Hole or hiking to the site of an inland hole and catching a glimpse of the past. One of the best Blue Holes to check out in Andros is ”The Crater.” This small Blue Hole is well suited, both for new divers and those with more experience under their weight belts. The walls of ”The Crater” are home to a booming reef system and accompanying fish seeking shelter. Moray eels and rays make their way up and down the walls, and turtles are commonly seen floating along.

Long Island: Location of the deepest known Blue Hole on Earth, the bay west of Clarence Town on Long Island is home to Dean’s Blue Hole, which plunges to a depth of 663 feet (202 meters). This magnificent Blue Hole is considered to be an enigma as nobody has been able to reach its bottom. However, due to its enclosed nature, the wind does not penetrate the diameter making it an ideal dive or swim even for beginners. This blue Hole is also connected directly to the Atlantic through an inlet on one side and framed by cliffs and white sand beaches on the other, making it a marvellous sight in itself. 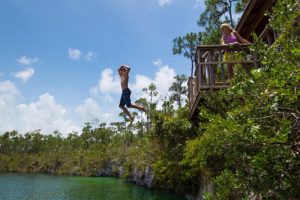 Nassau, New Providence: This island in The Bahamas offers one of the most unusual dive sites globally – the Lost Blue Hole. Its vast dimensions attract major scuba diving enthusiasts from around the world. The Lost Blue Hole has a one-hundred-foot diameter and an astounding depth of two hundred feet. The sheltered walls of this extraordinary dive site shield it from external currents and waves, ensuring outstanding clarity. Due to this feature, it also provides a steady habitat for a plethora of marine species, including nurse sharks, reef sharks, angelfish, snappers, amberjacks, yellowtails, manta rays, moray eels and sea turtles.

Great Abaco Island: This northernmost island in The Bahamas has been regarded predominantly as a yachting and fishing paradise for the last 50 years. However, Abaco’s best-kept secret is that it has more than 100 Blue Holes and limestone caves right beneath the island. One of the easiest and most intriguing places to be found on this island is the Treasure Cay Blue Hole. Located in the middle of the Pine Forest in Treasure Cay, this geological phenomenon contains a mixture of salt water and fresh water. The depth of this Blue Hole is 254 feet, and it is not known to have any marine life due to its inland location. You can fly from a tree swing and cannonball inside the Blue Hole. The perimeter is barely a foot from the water, so you can just as easily step inside.

These elusive “Blue Holes,” or underwater cave systems, are a diver’s mecca. Yet somehow, most of them are still waiting to be explored…

To learn more about all the islands have to offer, visit: www.bahamas.com