For years now, I have been hearing people rave about both Lisbon and about how it has become one of Europe’s most popular tourist destinations. From afar, I could never quite figure out what all the fuss could possibly be about but now I know. This is a city with charm, history, culture, music, cuisine, mystique, and beauty all rolled into one. Plus, it is clean, safe and affordable. 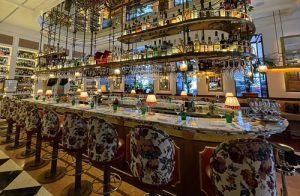 Lisbon is remarkably accessible to Montrealers, as it is an easy seven-hour direct flight. Many of the flights depart in the evening allowing visitors to hit the ground running the next morning. A twenty-minute cab or Uber ride gets you to most hotels in the city core.

I really knew nothing about Lisbon before this trip and, as readers of this column know, many of my travel decisions center around luxury boutique hotels. My first stop was the Memmo Alfama Hotel (a member of Design Hotels, noted for their unique architectural and interior design features). 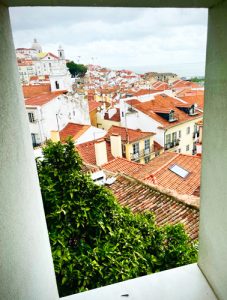 As it turns out, the neighbourhood of Alfama is actually a village within a city and is one of the first to be rebuilt after the city’s devastating earthquake and tsunami of 1755 that basically leveled every building in Lisbon (with the exception of eleven that remained standing). Alfama is a rabbit’s maze of tiny streets, cobblestone sidewalks, steep stairways and colourful personalities. Prepared to get lost here, as most do!

The Memmo Alfama Hotel itself sits on a perch with a glorious view of the Alfama terra cotta rooftops and the Tagus river. On many days the harbour terminal is lined with two to three cruise ships. Built within a former shoe polish factory and bakery both somehow cleverly merged together, it feels like a series of a child’s building blocks arranged at the end of a tiny lane. (It is only thanks to the great invention of GPS technology that your taxi or Uber driver will find it!) However, once you enter its doors you will find yourself into a welcoming sanctuary.

Here you’ll find staff brimming with hospitality, a main floor dining room which offers a wonderful complimentary breakfast, an upstairs wine-bar with the aforementioned river view and an exterior pool and tapas-bar terrace. While compact (many of the rooms are small since they were originally designed to house the factory workers in its former life but are entirely functionable and comfortable) the hotel punches above its weight with extras such as a free daily guided tour of Afama, excellent food and if you are lucky, as was I, some of the best live fado (their mournful traditional love songs) found in the city! The Memmo Alfama or its sister property Memmo Principe (in the inspiring neighbourhood of Barrio Alto) are great immersions to this city’s charms. 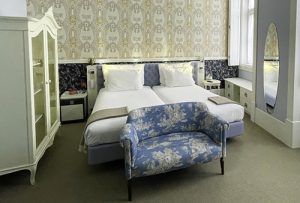 One of my goals on this trip was to stay at, or visit, as many of Lisbon’s boutique hotels as possible. My thesis was that this would be the best way to truly experience and discover the city. Thus, my next night was at the LX Boutique Hotel strategically located near to my next two destinations: Pink Street and the Time Out Market Lisboa. 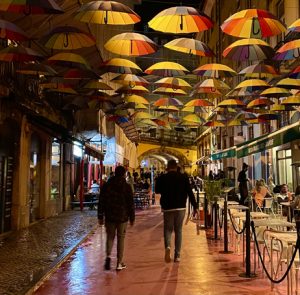 LX Boutique Hotel is located on one of the city’s main streets called Rua de Alecrim in the Cais de Sodré district. This area was formerly more of a run-down Red-Light district appealing to sailors on leave but now has been reborn as a lively tourist attraction near to the train and ferry terminal. Pink Street is a Instagramable collection of bars and restaurants that face onto a small three block pedestrian section of Rua Cor de Rosa that is literally painted a shocking pink under a canopy of hanging umbrellas. Here bar patrons congregate until the wee hours on the street outside some of the bars and thumping nightclubs. 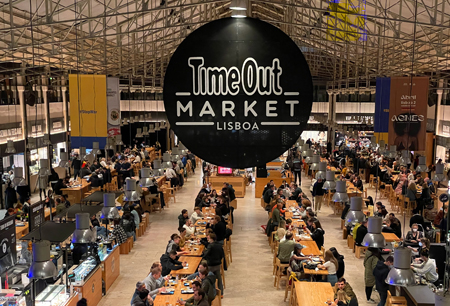 Time Out Market Lisboa offers a variety of dining options and is highly recommended for anyone
anywhere near Lisbon!

I had chosen LX Boutique Hotel as my real purpose to being in this area was to be within walking distance to Time Out Market Lisboa which is a must-see (and taste) for any visitor anywhere near Lisbon. Time Out is a well-known brand to many travelers originally for its travel magazines, and now its websites, focused on what to do in many major cities throughout the globe. In 2014 they decided to apply their expertise to curating a high-end food court of sorts by inviting this city’s top restaurants and chefs to open kiosks in a historic market space across from the train station.

Many of the city’s top chefs are represented here. Guests order their food from one of thirty choices and then are handed a buzzer that fibrates when the meal is ready to be picked up. Diners sit at long, wooden communal tables to eat which is a great way to meet fellow tourists from around the world. Many casual encounters happen here. Start with lunch and you may find the food so fabulous you may very well be back for dinner! Since Time Out Lisbon’s massive success, other Time Out Markets have opened throughout the world including one here in Montreal’s Eaton Centre. 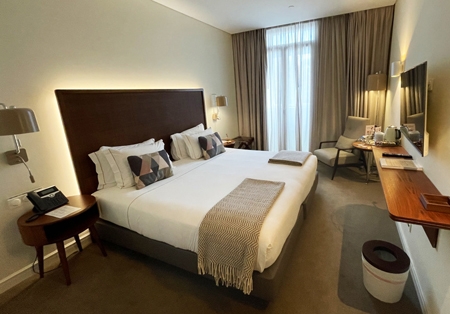 A guest room at the Five Star Corpo Santo

As for LX Boutique Hotel, I loved my room which was spacious, very nicely decorated with a modern Victorian flair, had beautiful painted shutters on the tall windows but its main feature was its strategic location.

My next evening’s stop was the award-winning Corpo Santo Hotel which was located just a few blocks away but enough of a distance to position myself in another interesting part of the city’s lower town. Set on a city square across from a gorgeous but abandoned cathedral, Corpo Santo is rated a five-star property and has the enthusiasm and service to prove it. One of this hotel’s secret treasures is an exposed archeological dig on the subterranean level which has been converted into a quiet reading space known as the Fernandina Room. Evidently these ruins are foundations dating as far back to Medieval Lisbon. Upstairs my room was lovely and had a surprise for me in the shower stall: an ambient sound and psychedelic light show! This was a first for me but was indeed entertaining. The room opened to a view of Ave. Ribeira das Naus which takes one along to the waterfront until the impressive Commercial Square. Many walking tours begin from this square which is also lined with restaurant terraces. Walk north through the spectacular Arco da Rua Agusta and one finds one of the city’s preeminent pedestrian shopping malls. 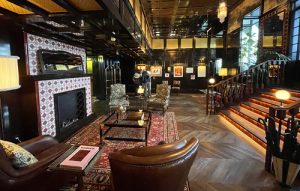 Two additional boutique hotels that I did not stay at since they are so new that I was not aware of them (until locals implored me to check them out) were The Ivens (in the Chiado district) and Palacio Ludovice (in Barrio Alto).

Walking into the lobby of The Ivens is a breathtaking experience. It evokes an explorer’s living room which is entirely suitable since this hotel was inspired by the 18th century African exploits of two legendary Portuguese explorers (Ivens and Capelo).  Interior design touches here include African spears, jungle-inspired wallpaper and a magnificent primate sculpture guarding the guest elevators. 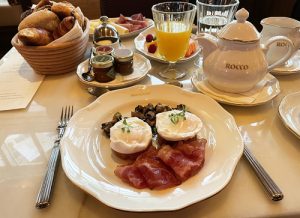 A.J. enjoyed a luxurious breakfast at the gorgeous
Rocco Restaurant

Attached to The Ivens is Rocco which has to be Lisbon’s most beautiful restaurant, bar and raw bar! You absolutely must see the Rocco to believe it! I had breakfast here one day and enjoyed the raw bar on another. Both were among the gastronomical and visual highlights of my trip. 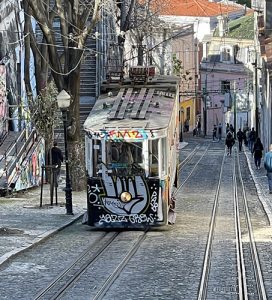 Further up the hill (one thing about Lisbon you will discover is that it is a city of seven hills on various inclines so make sure to bring your walking shoes) Palácio Ludovice is one of the city’s newest luxury boutique hotels. It is located in one of the mere eleven buildings that survived the earthquake of 1755. This building which was constructed in the early 1700’s had served as the private residence of João Federico Ludovice who was Lisbon’s chief architect during the reign of King João V.  It currently offers 61 gorgeous rooms, each individually unique, which were designed by renowned Portuguese architect and designer Miguel Câncio Martins, also known for his design work for the Buddha Bar in Paris and the Opium in London. This is a “wine experience hotel” and was, in fact, a wine warehouse as a recent incarnation. 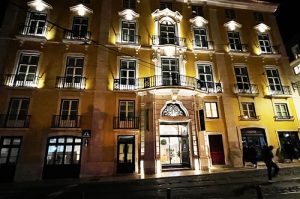 Many rooms at Palácio Ludovice enjoy a sweeping view of the cityscape and it sits across from one of the city’s most picturesque parks where, like most lookouts throughout the city, crowds gather to watch the sunset. For fun grab the vintage tram car that departs across from the hotel and it descends a steep hill to the magnificent Avenue Liberdade, considered the Champs Elysée of Lisbon and lined with luxury brand stores. Hold onto your tram ticket as it includes a return ticket back up the hill (you can thank me later).

While in this part of Lisbon, one restaurant that deserves your attention is A Cevicheria, a lively Peruvian seafood restaurant. You might spot it by the crowd gathered outside sipping their signature “Pisco Sours” while waiting for a table or by the interior’s ominous octopus sculpture suspended from the ceiling. Stop by and treat yourself to one of the city’s best plates thanks to Chef Kiko winner of the 2016 the “Prix au Chef de L’Avenir” award by the International Academy of Gastronomy.

There is much to enjoy and discover in Lisbon so try to give yourself enough time to truly explore the city to is fullest. And plan to return! I am checking for flights already.

• For what to do in Lisbon visit Time Out’s Lisbon Guide: timeout.com/lisbon

• To learn more about the Time Out Market Lisboa: timeoutmarket.com/lisboa

Hotels mentioned in this article: