A non-competitive fun run where individuals, families and groups walk or run one to ten kms to raise funds for cancer research.  It is a day of celebrating Terry’s legacy and helping to keep alive his dream of finding a cure for cancer. The course will be a 5 km route from one end of the port to the other, along the promenade as well as along the piers, then back to the start point. Participants will enjoy stunning views of Old Montreal and the St. Lawrence River. 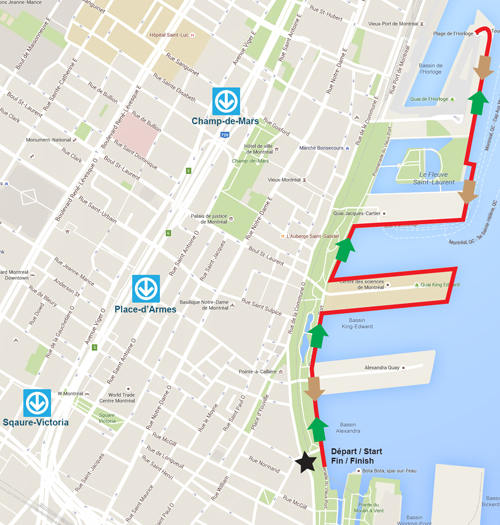 Terry Fox Runs take place in over 9,000 communities across Canada every year and are accessible to anyone with no entry fee, no minimum pledge and a non-competitive atmosphere.

Run, Walk, Wheel – No bikes or Rollerblades
Dogs are allowed.

Participants can raise pledges or make a donation of any amount they wish.

To find a run site near you, visit: www.terryfox.org/Run/Find_A_Runsite.html

“Even if I don’t finish, we need others to continue.
It’s got to keep going without me.” – Terry Fox

About Terry Fox
Terry Fox was born in Winnipeg, Manitoba, and raised in Port Coquitlam, British Columbia, a community near Vancouver on Canada’s west coast. An active teenager involved in many sports, Terry was only 18 years old when he was diagnosed with osteogenic sarcoma (bone cancer) and forced to have his right leg amputated 15 centimetres (six inches) above the knee in 1977.

While in the hospital, Terry was so overcome by the suffering of other cancer patients, many of them young children, that he decided to run across Canada to raise money for cancer research.  He would call his journey the Marathon of Hope. It was a journey that Canadians never forgot.

After 18 months and running over 5,000 kilometres (3,107 miles) to prepare, Terry started his run in St. John’s, Newfoundland on April 12, 1980 with little fanfare. Although it was difficult to garner attention in the beginning, enthusiasm soon grew, and the money collected along his route began to mount. He ran close to 42 kilometres (26 miles) a day through Canada’s Atlantic provinces, Quebec and Ontario. However, on September 1st, after 143 days and 5,373 kilometres (3,339 miles), Terry was forced to stop running outside of Thunder Bay, Ontario because cancer had appeared in his lungs. An entire nation was stunned and saddened. Terry passed away on June 28, 1981 at the age 22.

The heroic Canadian was gone, but his legacy was just beginning. To date, over $650 million has been raised worldwide for cancer research in Terry’s name through the annual Terry Fox Run, held across Canada and around the world.