NEW YORK- When in New York, there are so many amazing productions to choose from on Broadway. Last month we told you about blockbusters Hamilton and Waitress. Now you can add two more to your list: School of Rock- The Musical and The Color Purple.

I did know quite what to expect from School of Rock – The Musical at Broadway’s Winter Garden Theatre (1634 Broadway). Based on the smash hit 2003 film of the same title, it features an original score by Andrew Lloyd Webber. Alex Brightman and Sierra Boggess lead the cast as “Dewey Finn” and uptight principal, “Rosalie Mullins.”

Let me just say right from the start that I loved every moment of this production. In fact, it is better than I could have possibly imagined. Had tickets been available, I would have gone back to see it again the following day. Most of the performers in this show are young kids and as the voice of Andrew Lloyd Webber himself tells us before the curtains go up, they really are playing their own music live.

The show opened to rave reviews last December. It was nominated for four Tony Awards including Best Musical, Best Book of a Musical, Best Original Score and Best Performance by an Actor in a Leading Role (Brightman). The storyline involves Dewey Finn, a failed, wannabe rock star who decides to earn a few extra bucks by posing as a substitute teacher at a prestigious prep school. There he turns a class of straight-A students into a guitar-shredding, bass-slapping, mind-blowing rock band. While teaching these pintsized prodigies what it means to truly rock, Dewey falls for the school’s beautiful, but uptight headmistress, helping her rediscover the wild child within.

Brightman more than earned his Tony nomination. He truly did leave everything on that stage, giving what must be an absolutely exhausting performance. While watching, I couldn’t imagine him doing this eight times a week, which is the standard Broadway schedule.

Even after his tiring performance, Brightman exited via the stage door after the show. He was personable and interactive with his fans, posing for selfies and signing autographs. He told me: “I have lost 55 pounds in this role since last November”. After having seen him perform live, I can’t say that this number is surprising.

I loved the movie, actually watching it several times, so seeing the musical was a treat. Brightman had a big challenge as everyone who has seen the movie remembers Jack Black’s iconic performance. Brightman stays true to the original while still making the role entirely his own. Leaving the theatre, Jack Black was the last thing on my mind.

While he gives an outstanding performance, the true stars of the show really are the children. Many of them were cast in a large open call in New York City. Children lined up all day for the chance to audition and I noticed in the playbill that many cast members were making their Broadway debuts. They are not only amazing instrumentalists for their age. They play their instruments just as well as a Broadway house band would play the songs, and their energy is infectious through the show’s most popular tunes, including Stick it to the Man and Teacher’s Pet.

Aside from the upbeat numbers, a highlight of the show is a song called If Only You Would Listen in which the children lament to the audience about their parents who do not understand. Many sniffles could be heard from the crowd around me following the powerful and emotional performance.

This is such a crowd pleaser that by intermission everyone in my row was saying “wow!” repeatedly.  The closing number really sends everyone home on a high. It is more like the conclusion of a live rock concert as the traditional curtain call is replaced with Brightman introducing the cast as they take their bows.
Info: www.schoolofrockthemusical.com 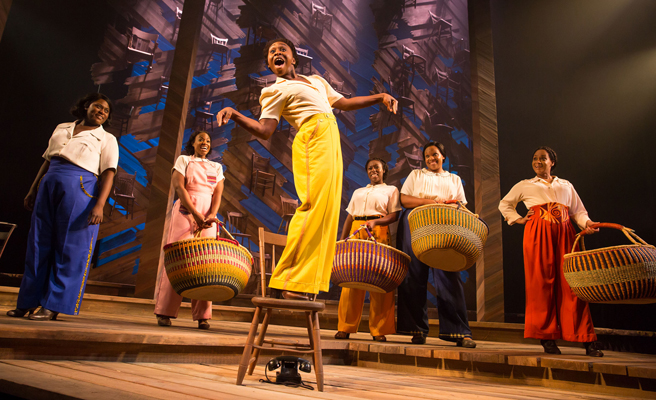 As for The Color Purple, It is hard for me to believe that I saw the motion picture of the same name more than 30 years ago, starring Oprah Winfrey and Whoopi Goldberg. When I heard that it had been revived, following a successful run almost a decade ago as a Broadway musical, I knew I just had to add it to my list. You can see it at the Bernard B. Jacobs Theatre at 242 West 45th Avenue.

The original production opened on Broadway in 2005 and played 910 performances. This reimagined production opened in London during the summer of 2013 at the Menier Chocolate Factory before transferring to Broadway. The musical is based on Alice Walker’s Pulitzer Prize-winning novel and the 1985 Hollywood film it spawned.

At the 2016 Tony Awards, The Color Purple won for Best Revival of a Musical while Cynthia Erivo, took home  Best Actress in a Musical honours for playing the iconic role of Celie. I cannot possibly start this article with anything other than the magnificent performance given by Erivo, unbelievably in her Broadway debut. It has solidified what is sure to be a long career for her.

Celie’s journey is not an easy one and is surely challenging to perform eight shows weekly. Celie endures decades of abuse of all kinds: sexual, physical, and emotional. Despite many losses and obstacles, she somehow finds her way to independence and self-acceptance.

By the show’s end, when Erivo sings the show’s most famous number I’m here, telling us “I believe I have inside of me everything that I need to live a bountiful life”, audience members can’t help but tear up with joy. It is impossible for the crowd to not cheer when she looks directly at us and finally declares: “I’m beautiful.” Deservedly so, the crowd rose to its feet mid-show for a lengthy standing ovation when she completed the song, the first time that I’ve ever seen this occur.

While Erivo is incredible in this production, the entire company of performers showcased their outstanding talents. The show features powerhouse Danielle Brooks from Orange is the New Black), who was unfortunately not there when I attended (her understudy, however, was spectacular as well). In the role of Shug Avery, originated in this production by Jennifer Hudson, Tony Award-winner Heather Headley now takes the reigns, giving a brilliant performance.

Directed by Tony Award-winner John Doyle and with a memorable score of jazz, ragtime, gospel and blues, this musical handles heavy material beautifully.

Thinking back to the movie, I struggled to remember the meaning behind the title. After watching the titular song The Color Purple performed live, I can’t imagine ever forgetting that it serves as a reminder that we can always find beauty in the world around us. It is impossible to leave the theatre without feeling uplifted and empowered.
Info: www.colorpurple.com
-with files from Alexandra Cohen