Whether it’s a present for someone or a short getaway for yourself over the holidays, Toronto promises a visit packed with art exhibits, theatre and exciting culinary discoveries.

Theatre! There’s plenty of it in Toronto. Set to open on Broadway in the New Year, Les Misérables has been recreated in Toronto for the 50th anniversary of the show. It was produced, once again, by Cameron Mackintosh (producer of the three longest running musicals in history – Phantom of the Opera, Cats and Les Misérables).

Those who saw Les Misérables ‘way back when’ are in for a theatrical revelation. This new production is the most moving two hours and fifty minutes I have ever spent watching a musical. It is an emotional experience that will have your ears and eyes riveted to the stage whether you have seen it before or not. It will live with you long after the show ends. It is a must see, especially if you have seen it before, because it will take you to new heights in scenic creativity and staging. It also features an excellent cast with standouts Ramin Karimloo as ‘Jean Valjean’, Chris Saunders as ‘Thenadier’ and Earl Carpenter as ‘Javert’. (Both Karimloo and Saunders will be taking their roles to Broadway.) Les Miz is on at The Princess of Wales Theatre until February 2, then moves on to Broadway where the tickets will be much more expensive. So… 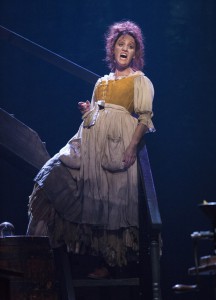 Cap off your evening with an intimate dinner at Grace; a small treasure nestled on College St., simply decorated and very comfortable. It offers up a choice of “contemporary styled menus mixed with traditional flavours”. There was little ‘traditional’ about the Savoy Cabbage appetizer I experienced. It was divine…with sunchokes, walnuts, quince and gorgonzola, followed by Late Harvest Cannelloni with daikon, fennel, arugula, caramelized mushrooms, and radish top pesto. Grace has received very positive reviews from The Globe & Mail, The Toronto Star and Toronto Life Magazine – well worth the trip to Queen Street.

Continuing on in an Arts & Culture mode, a new exhibit at the Art Gallery of Ontario is The Great Upheaval: Masterpieces from the Guggenheim Collection, 1910-1918. It is an exciting collection of works showcasing art produced in Europe prior to and during the First World War. All the pieces are from the collection of the Solomon R. Guggenheim Museum, featuring Marc Chagall, Marcel Duchamp, Henri Matisse, and Pablo Picasso. The exhibit focuses on the tumultuous years that featured new movements of expressionism, futurism and cubism. On until March 2, 2014.

Something a little different, but touches us all. The Gardiner Museum is featuring a ceramic exhibit called Animal Stories. Don’t be misguided by the name of the exhibit – it is geared to adults who would relish being taken on a delightful journey back to their childhood. Relish it I did! It becomes very clear how much animals, one way or another, affect our lives with the affectionate relationships we develop with them over the years. The exhibit covers the 17th century to the present day, featuring Japanese and Chinese porcelain, English and European ceramics and the work of many present day artists. On until January 12, 2014.

I stayed at the Eaton Chelsea on College Street; Canada’s largest hotel and a favourite for families, couples and single business travelers. Near the Eaton Centre and many of the theatres, it is featuring a holiday special ‘Shop ‘n Stay‘ from $129 per night. It also has some pretty exciting places to eat: Bb 33 for elegant dining in a relaxed setting. For lunch, T/Bar, where I discovered the best Indian Curry buffet in town. You can also get a pretty mean Caesar here. The staff at the Eaton Chelsea can also arrange those theatre bookings you might want. The hotel has recently undergone a major renovation, and has a fully equipped fitness centre and indoor pool.

Toronto has a thriving theatre scene and world-class art galleries. Many hotels offer attractive rates in December and January.

Here are the web sites for the places mentioned in this article: