Winter has arrived in full force, and with it snow sports. With the pandemic fading, many downhill skiers are flocking to ski centres once again operating at full capacity, free of Covid-19 restrictions. Crossing the U.S. border is also viable, and with it access to big-mountain skiing in neighbouring Vermont.

Skiing and Vermont are synonymous. While Quebec lays claim to the oldest ski lift in North America (at Shawbridge in 1933), Woodstock, VT was right on its heels in 1934. The Green Mountain State now has dozens of alpine ski centres, most of them boasting impressively high summit elevations and significant vertical drops. As an ambience bonus, many are adjacent to idyllic New England villages with cozy inns and hearty dining. Vermont’s peaks receive substantial snowfall, and resorts particularly in the central and southern sections enjoy relatively mild weather. 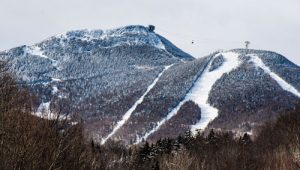 A drive down the state’s classic mountain byway, Route 100, along the spine of Vermont takes you past most of the best known resorts. Once you’ve pinpointed a destination, interstate highways 81 and 91 can whisk you to a particular ski centre in only a few hours from Montreal.

The Vermont Ski Areas Association, or Ski Vermont, promotes alpine and cross-country skiing across the state. Its slogan “Winter in its original state” underscores both Vermont’s status as the birthplace of American skiing and its natural snowy ambience. The Ski Vermont website (skivermont.com) offers a plethora of information on individual resorts, including details on lift tickets, snow conditions, resort improvements (skivermont.com/whats-new), and much more.

The following is a rundown of Vermont’s biggest and best downhill ski resorts: 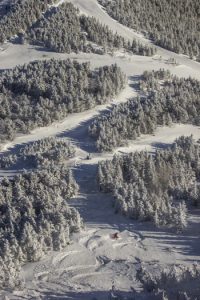 Just a few kilometres across the border from the Eastern Townships, Jay is known for its powder glade skiing. It has Vermont’s only aerial tramway, whisking skiers and boarders to the Peak’s 4,000-foot summit in 10 minutes. Average annual snowfall of 359 inches is Vermont’s greatest. The result is a powder-full, high-mountain experience only two hours from Montreal. Unlike most other Vermont resorts, it’s not adjacent to a village – but the extensive base facilities more than compensate. These include an indoor water park, an arena (skating), recreation centre, climbing wall, and a half-dozen restaurants and bars. There are two hotels at the main base, and a third at the Stateside base. In between are a wide range of ski-in/out condominiums. Lift tickets and a number of other services are available at par with the Canadian dollar, if paying with cash. www.jaypeakresort.com

This is a big mountain tucked away southeast of Newport, VT. Its quiet ambience is emblematic of Ski Vermont’s slogan, Winter in Its Original State. But don’t expect rope tows and untamed moguls at Burke; there are two high speed chairlifts serving 53 groomed trails. Its slopes tend to be on the more challenging side. You’ll be in the company of some of the top young skiers, as this resort is home to Burke Mountain Academy, which includes among its alumni U.S. Olympic gold medalist Mikaela Shiffrin and Canadian Thomas Grandi, winner of two World Cup races. Lift tickets can be purchased with cash at par with the Canadian dollar. Burke is known for condominium and cottage accommodations, in addition to a hotel at the base. www.skiburke.com

Another classic resort, “Smuggs” is a long-time favourite of Montrealers, of which many have owned ski chalets there for generations. Originally three separate ski centres, including Madonna Mountain, the long-since-merged resort has 1,000 acres of skiable terrain on three mountain faces, one of which is the northwest side of Stowe’s Spruce Peak. Smugglers’ speciality is providing a top experience for young families, with plenty of on-mountain condo lodging. There are a half-dozen places to eat in Smuggler’s base village. There is a food store as well, with larger supermarkets in nearby Jeffersonville and Cambridge. Note that there is no direct road access to neighbouring Stowe during winter, as the switchback-laden Smuggler’s Notch road (Route 108) is closed from November to May. Smugglers is offering Canadians a 20% discount on accommodations. www.smuggs.com 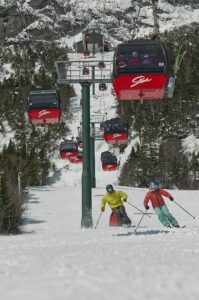 Showing some style for the gondola riders at Stowe

The grand-daddy of New England ski resorts, lift service here dates back 80 years. But there is nothing old about skiing Stowe. The iconic ski area comprises three faces, two on Mount Mansfield (Vermont’s highest summit) and a third on Spruce Peak, with a gondola linking the two base areas. Spruce Peak’s facilities have been extensively expanded in recent years and include the Adventure Centre, which houses an indoor rock-climbing wall and numerous children’s activities.

The resort is one of three Vermont ski areas owned by Vail Resorts Inc., including Mount Snow and Okemo, as well as Whistler Blackcomb in British Columbia. Stowe offers an unbeatable on-and-off-slope experience, with accommodations and restaurants at its base, and a plethora of inns, hotels, restaurants, pubs and boutiques all the way down the access road (Route 108) and in the picturesque village below. Stowe is as iconic and pretty as a New England town can be. It’s an easy drive, just 15 minutes off Interstate 81 east of Burlington. www.stowe.com

Less than an hour south of Stowe (and only 20 minutes south of I-81) is Sugarbush, another classic Vermont resort. In operation since 1958, the resort has more than 100 trails spanning five faces on two mountains, Lincoln Peak and Mount Ellen. The latter was a separate resort, Glen Ellen, until 1979. Both mountains have impressive vertical drops of 2,400 and 2,600 feet respectively. Of note are extensive glade and off-piste terrains, including the 2,000-acre Slide Brook Basin situated in a valley between the two mountains. The resort’s two bases are linked by a high-speed chairlift, as well as a free shuttle. There is plenty of slope-side accommodation at the Sugarbush base, and numerous restaurants and bars. The choice extends to the villages of Warren and Waitsfield down on Route 100. Sugarbush is owned by Alterra Mountain Co., along with Stratton in southern Vermont as well as Tremblant and Blue Mountain (Ontario). www.sugarbush.com 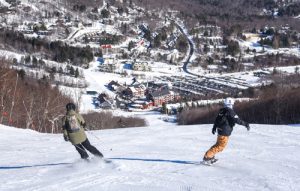 At the heart of Vermont skiing is the big one, Killington. Everything about this resort is big – number of peaks (6), number of trails (155), skiable terrain (1,500 acres), vertical drop (3,000 feet), lifts (22) and number of gondolas (3). And that doesn’t include its subsidiary ski centre, Pico Peak a few miles to the west, which adds 58 trails and seven lifts to the total. Add to that Killington’s claim to New England’s longest ski season (late October to sometimes early June), due to the East’s most extensive snow-making system. The big event of the year comes early in the season, when the resort hosts the world’s top skiers at the Killington Cup, the opening event of the FIS women’s World Cup season. This week-long event attracts more than 15,000 visitors; the resort has nearly one million skier visits annually. That means a lot of accommodation and food-and-beverage services to keep the Killington faithful rested and fuelled. In addition to the 200-room Grand Killington Hotel at the resort’s main base, there are numerous condo hotels, inns, chalet rentals, bars and restaurants lining its access road, high above the junction of routes US-4 and VT-100. Killington is a bit farther from Montreal than the above resorts, but worth the extra drive if you want a lot of variety on and off the slopes. www.killington.com 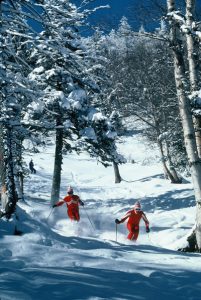 Less known than its big-name neighbours, Okemo Mountain Resort holds its own thanks to some impressive alpine numbers – 121 trails, 20 lifts and 2,200 vertical feet descending from a 3,344-foot summit. Its family orientation is supported by a substantial slope-side condo accommodation, “family progression” snow parks (geared to age and ability), a strong ski school, a snowtubing park, a year-round coaster slide and an indoor skating rink. If you’re not wanting to cook and clean up, there are 12 places to dine out at the resort. Okemo is near Ludlow, little more than a half hour from Killington, Manchester or Intestate 91 at Weathersfield. www.okemo.com

There’s yet more major skiing farther south in Vermont. At Stratton, southern Vermont’s highest mountain, you can ski 88 trails served by 11 lifts over 2,000 vertical feet, anchored by a resort village similar to what you find at Tremblant. That’s not surprising, since Stratton was expanded under the ownership of Intrawest Corp. before ownership transitioned to Alterra Mountain Co. in recent years. (Intrawest, of course, developed similar villages at Tremblant, Blue Mountain (Ontario) and Whistler-Blackcomb.) Thus, there are plenty of accommodation and restaurant choices (22 of each, in fact), and lots to do when not on the slopes. What’s more, the resort is little more than a half hour to Manchester, which boasts some of Vermont best shopping and dining, not to mention a number of outstanding inns and hotels. www.stratton.com

Vermont’s southernmost ski centre is Mount Snow, a half-hour beyond Stratton. Popular among skiers from Boston and New York, it offers an alpine atmosphere in the wide Deerfield Valley. There are 82 trails spread across the mountain’s four faces, accessed by 19 lifts. Unbeatable for a quiet escape, the resort is anchored by the large, amenity-laden Grand Summit Lodge Resort at its main base. Mount Snow’s base doesn’t offer the same village atmosphere of Stowe or Stratton. However, there are a number of inns and more than 30 restaurants in the valley and in nearby Wilmington. Mount Snow shares Vail Resorts’ Epic season passes with two Vermont neighbours, Stowe and Okemo, as well as dozens of other resorts in North America. www.mountsnow.com