MONTE CARLO, MONACO –The Principality of Monaco (www.visitmonaco.com) has a colorful and fascinating history filled with barbarians, kings and even a movie star. It is a story of castles, epic battles and untold riches. While in Nice, France recently we took the very simple 20 minute rain ride to Monte Carlo and spent the evening in this glittery venue of the rich and famous.

Since 2005, H.S.H. Prince Albert II – already known as the green Prince for his interest in the environment – has been leading the Principality into the 21st century with the support of His sisters H.R.H. The Princess of Hanover and H.S.H. Princess Stephanie. In 2011 Prince Albert married Charlene Wittstock.

Monaco enjoys a privileged location at the heart of Mediterranean Europe. The Principality is nestled between the Alps and the Mediterranean Sea, bounded by the French Riviera to the west and the Italian Riviera to the east. This is the second smallest country in the world, after Vatican City -three miles long by one-half mile wide (about the size of New York’s Central Park). While Monaco is the name of the country, Monte-Carlo is a district within Monaco.

French is the Principality`s first language, but some natives speak the ancient Monegsque. English and Italian are also widely spoken. Monaco has a population of just over 32,000.The Automobile Club of Monaco organizes a Grand Prix race each year. There are more than 3,000 seats available for sale on the circuit.

The size of Monaco allows speedy and easy commutes between the various districts of the Principality. Walking in the Principality is facilitated by public lifts and escalators that operate 24 hours a day, every day, to help overcome different altitude levels. Public transportation includes a bus shuttle service that includes five different routes. Departures are every 10 minutes from 7 am to 9 pm.

The highlight of our evening in Monte Carlo was a remarkable dinner at the Salle Empire (www.montecarlosbm.com/restaurants-in-monaco) at the gorgeous Hôtel de Paris (www.hoteldeparismontecarlo.com). We took the train from Nice to Monte Carlo and enjoyed a pleasant 10 minute walk through town to this most breathtaking facility where we were seated on a gorgeous terrace overlooking the entrance to the grand casino. This was “people watching” at its best. A musical trio serenaded us with soft songs and a group of servers provided us with sensational service, starting things off with champagne, soft lemon rolls and their signature potato chips. 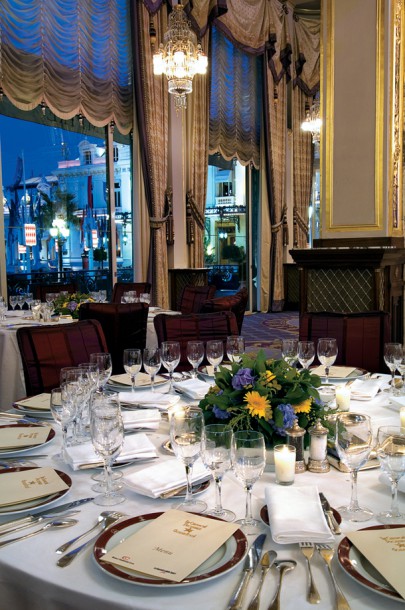 It is in the Salle Empire that haute gastronomy is served during private dinners catering for up to 350 guests, and concerts and shows are organized for invited audiences. Spectacular celebrations also take place in this setting, unique in Europe. It is part of the Alain Ducasse enterprise. We had already tasted his culinary excellence earlier on in the trip at Le Jules Verne Restaurant at the Eiffel Tower.

Home to chic galas, refined dinners and the Principality’s most sophisticated soirées, the Salle Empire – a classified historical monument — underwent careful and meticulous restoration in 2004. Eight hundred thousand gold leaves (the equivalent of a gold bar) for its ceiling, five French windows opening out to the terrace overlooking the Place du Casino (a distinctive feature which astonishes guests), swathes of silk and precious trimmings… nothing has been forgotten to glorify its style and its beauty.

We experienced an extraordinary nine course meal which lasted nearly two and a half hours. Every item on the menu was explained in great detail and if something did not meet our dietary requirements a substitute was easily arranged. First was an interesting and nutritious drink, a concentrated healthy extract of bio vegetables. This was followed by raw and cooked vegetables from the hotel’s own garden, with tangy juice. We then enjoyed some amazing eggplant ravioli with fresh goat’s cheese and thyme lemon. Next was a cookpot of Brittany lobster, with coral juice. The main course was a roasted lack of lamb from pre-alps rubbed with summer savory and summer vegetable. It was beautifully prepared.

There were no less than three separate desserts: home-made delicacies and chocolates from the Hôtel de Paris; red fruit, strawberry juice and vanilla ice cream; and a traditional chocolate soufflé. The servers made a hole in the middle and poured hot chocolate sauce inside. We each got a side plate of whipped cream. This was so light and beyond delicious. The final serving was a moka coffee.