The Stewart Museum has partnered with the Canadian War Museum to bring a travelling exhibition to Montreal. The exhibit began its Canadian tour in 2010 to mark the 100th Anniversary of the founding of The Canadian Navy. The exhibit contains 44 paintings by Canadian war artists and they are mostly large canvasses that focus of the Battle of the Atlantic.  The Stewart Museum has a vast collection of military artefacts, including uniforms and weapons that have been added to the exhibit.

Montreal is the last stop for The Navy exhibit, which has been seen by more than 300,000 Canadians. The paintings are from the Beaverbrook Military Art Collection, and the artists include: Alex Colville, Harold Beament, Anthony Law, Ted Zuber, and Pegi Nicol Mcleod. The works have a big, raw feel that is illustrative of war, and the final consequences that befall those whose ships slip beneath the waves. 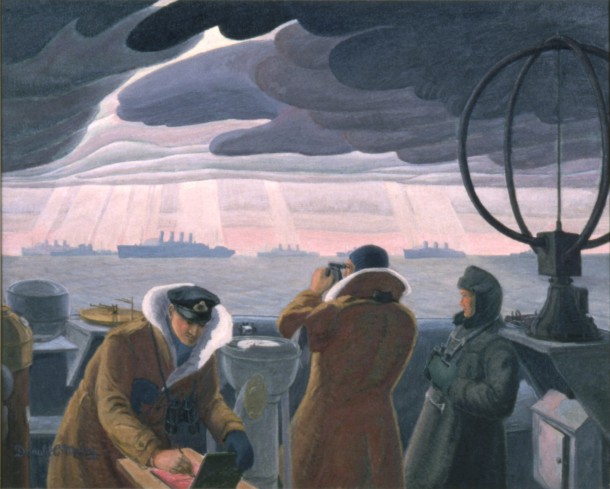 Protection by Lieutenant Donald Mackay – notice the ‘hand of God’ in the clouds. Courtesy of the Beaverbrook Collection of War Art, Canadian War Museum

One particularly dramatic painting is of the HMCS Ville de Quebec as she rams a German submarine in the Mediterranean on 1943. The battle lasted just twelve minutes, and military artist Harold Beament captures the violence of the collision. I found myself coming back to that particular painting several times.

Servicemen is a lifeboat is another compelling work, perhaps because air force artist Paul Goranson himself survived the sinking of a ship he was on while crossing the cold, grey North Atlantic. Another painting depicts the hard looking MPs patrolling the lively and decadent Barrington Street near Halifax Harbour, where thousands of sailors would come ashore from their ships at dock and moored in the Harbour. 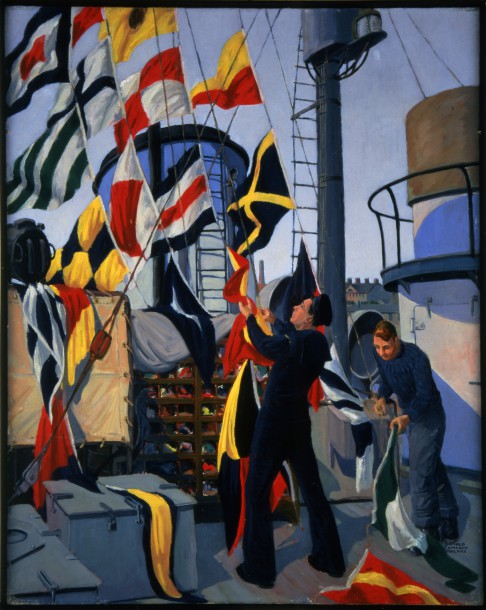 The exhibit is divided into four sections, beginning with the Canadian Navy with Rowley Murphy’s painting Bangor Entering Esquimault.  The Navy at Sea is the second part and depicts operations at sea – including rescue. The paintings of Part 3 are themed The Navy at War, and Part 4, titled Legacy is a small part of the exhibit and it includes a Burial At Sea and Graveyard, Sorel Quebec where decommissioned ships are still tied up, and forgotten. The purpose of the exhibit is that we don’t forget the men and women who sailed and continue to serve in our Navy, and indeed in our Armed Forces.

Curator Khan Rooney explained the irony behind a brilliantly coloured painting of signal flags that was done by an artist who was colour-blind. “These paintings are about real people” he noted during our visit, as he brought the details of the works alive.

There are activities and interpreter-guides on duty during the summer months. Activities for children aged 7 – 12 include a workshop on making paper boats and a treasure hunt for pennants (keeping in a nautical theme). This is a wonderful exhibition that will touch people in different ways – but touch you it will. 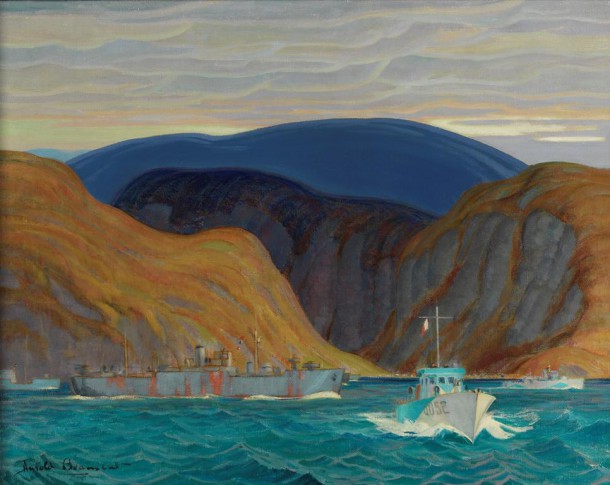 The Stewart Museum is located in the wonderful old fort on St Helen’s Island, which is especially beautiful in the summer months, and well worth the trip by car or by metro. The museum lowered entry fees this year to make it more accessible; $20 for families, $10 for adults, $8 for students and seniors and free for children under 6. The museum is open Wednesday to Sunday, 11am – 5pm. For information: www.stewart-museum.org or 514-861-6701.