Suzanne Sauvage and her team at The McCord Museum continue to select and curate exhibits that resonate with Montrealers; bringing renewed energy into this wonderful Montreal museum.  Music plays an important role in most cultures, and the music written and performed by French and English Quebec artists from the 1960s to present day is the subject of this exhibit that continues until October 13. At the opening, McCord President and CEO Suzanne Sauvage stated; “Quebec’s history is intimately connected to its songs and music, particularly since the Quiet Revolution. We therefore wanted to draw on this intangible and unique heritage and recount some of the watershed moments in our history that have helped define an era and our identity.” And while there is understandably more Francophone artists included – because there were more of them, English-language artists are well-represented by Leonard Cohen, Jesse Winchester, Men Without Hats and many more. There is a video of Oscar Peterson and Oliver Jones performing Peterson’s Hymn Of Freedom at Place des Arts during the 2004 Jazz Festival that brings an emotional response from both linguistic groups. 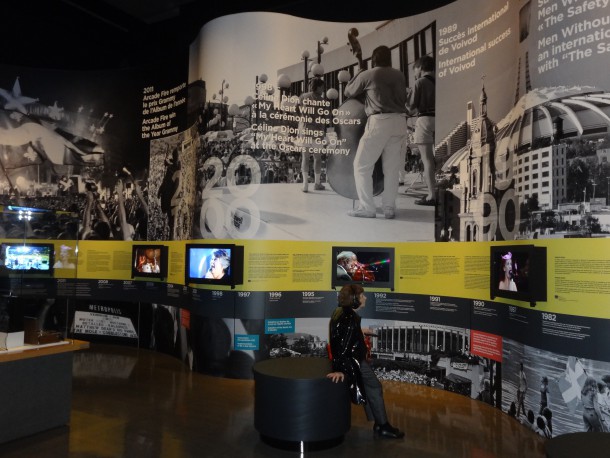 The exhibition has a wealth of materials that trigger memories; including 100 songs and videos and 200 objects such as posters, album covers, costumes (some of them outlandishly spectacular!) and guitars. You’ll see photos of the inimitable Les Classels (the guys with the white hair, suits, instruments), Jenny Rock’s boots, and onto acoustic and electric guitars owned by many legendary Quebec musicians.

The exhibition is divided into six zones, and it is highly recommended that you use the headphones and accompanying soundtrack follow the soundtrack of the exhibit. Visitors first pass through The Insolence of Youth, featuring the Yé-Yé! era of the 60s. Quebec had (and still has) a unique ‘star’ system. It’s more like the US star system than other parts of Canada. I can remember when as a teenager, I visited a music store in Longueil and a young boy ran in breathlessly to exclaim that the lead singer of Les Sultans was coming to the store! Nothing like that occurred when Myles Goodwyn of April Wine came into Steve’s Music Store on St. Antoine.

Dreaming of Other Worlds addresses the protest songs of Quebec and the role that music played as a rallying point for political movements and anti-globalization movements. Exhibits include the manuscript Gilles Vigneault’s iconic Les gens du pays and Kate and Anna McGarrigle’s album cover; Entre la Jeunesse et la sagesse. Songs of the Brave is the third zone, and the focus is on the struggles of First Peoples. The costumes of Quebec rockers and international stars such as Céline Dion make up the Flights of Fancy in the Fourth Zone.  Moving onto to Musical Milestones, the exhibit reminds us of major concerts and events, including Monique Lyrac’s spellbinding performance of Mon Pays at the International Festival of Song in Sopot, Poland where she won first prize. You’ll also see that Peterson/Jones video in this part to the exhibit.

The circuit ends with the Anthems zone that features three songs of love and hope that have become timeless. You’ll have to go to the exhibit to hear of you agree with the curators. The McCord personnel sought advice from people involved in the music industry, and they have done an excellent job in re-creating the soundtrack of our lives, especially if you came of age during the 60s and 70s.

Keeping with the musical theme, The McCord is presenting performances on Wednesday evenings from 5:30 to 6:30 in the Urban Forest, where they have turned Victoria into an open air terrace with a different food truck every day. A bar is set up on Wednesday evenings until August 27. If it rains, the concerts are moved indoors in the museum. The Music exhibit is just $9.50 on Wednesday evenings after 5pm (open until 9pm), and it can make a nice package to include the free outdoor show at 5:30. 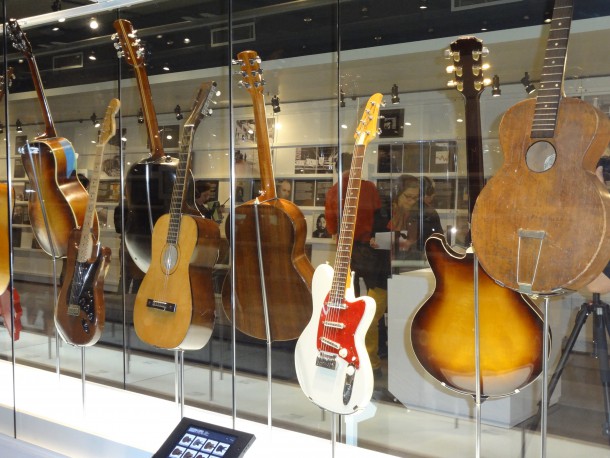 The McCord Museum is located at 690 Sherbrooke St. West (corner of Victoria) opposite the McGill University campus. For information about tickets, and Wednesday evening performers, please call: 514-398-7100 or visit www.mccord-museum.qc.ca