Like many Montrealers, I have fond memories of my visits to Ben’s during different stages of my life – as McGill student, a musician and later as a businessman. The McCord Museum has an outstanding exhibit of Ben’s memorabilia, right down to some of the in-store promotional posters and a selection of the celebrity photos, including a dramatic life-sized photo of Liberace. After the iconic Montreal landmark closed in 2006, the family donated the restaurant’s memorabilia to The McCord. 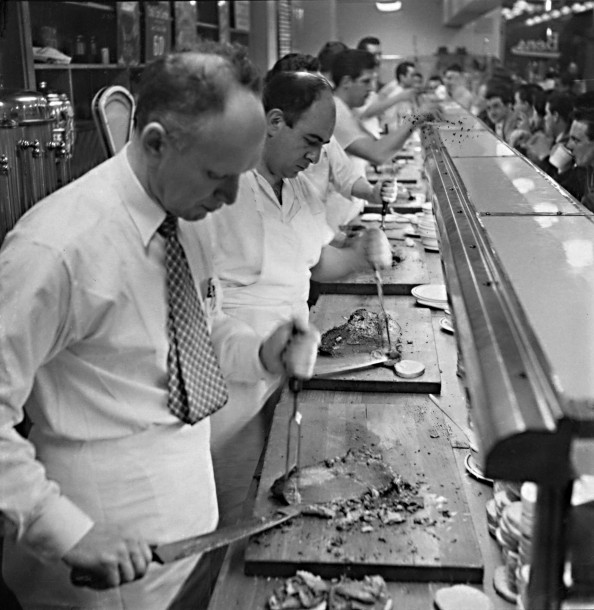 Al Kravitz slicing smoked meat behind the counter in 1952

The Exhibit takes you back to the original Ben’s on St. Lawrence Blvd, situated close to the garment district. Ben Kravitz immigrated to Montreal from his native Lithuania on 1899. After a brief courtship, he married Fanny, a fellow immigrant in 1904. IN 1908, the couple opened what would prove to be the first of three locations. The first restaurant was actually a small grocery store, and Ben offered their customers and local workers a smoked meat sandwich for 5 cents, which was enough to cover the cost. Ben and Fanny made money on the sale of soft drinks. In effect, the couple’s grocery store became a place where people gathered at lunchtime. It would prove to be a tradition that continued for the life Ben’s in its three locations.

During the Depression era in the 30s, Ben and Fanny moved to the Northwest corner of what are now De Maisonneuve and Metcalfe; in the hope that would increase their clientele by attracting downtown office workers. The restaurant was open 22 hours per day, serving office workers during the day, and catering to Montreal’s legendary personalities, musicians, and sports celebrities at night. McCord President Suzanne Sauvage admitted that she was a 3am customer in her youth! The decision paid off handsomely, and in 1950 the flourishing family business moved into their building across the intersection – Ben’s Delicatessen & Restaurant. 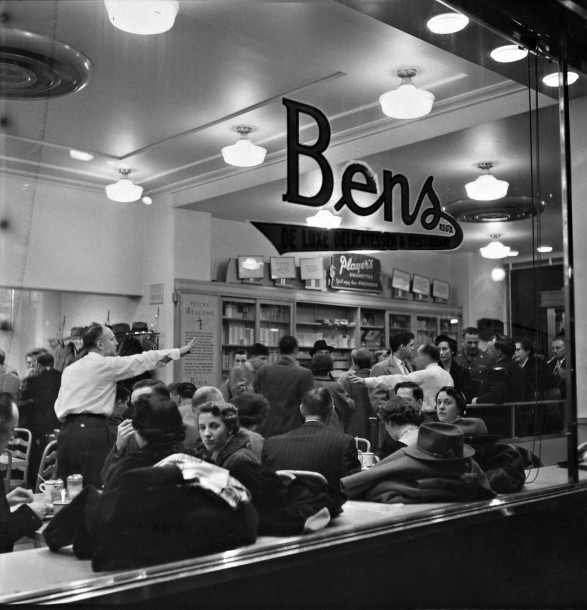 Ben’s from the street. Yes I have two seats, come right this way

Dr. Elliot Kravitz (retired) shared his first-hand memories of the restaurant that provided a living for his family during the press conference to launch the exhibition. He there – working as a busboy while he attended medical school. There is a photo of unemployed men lining up in the early morning hours at the rear door of the building, waiting for a brown bag holding a Ben’s smoked meat sandwich. “My Uncle Al went to my grandfather as said that we couldn’t keep feeding all these men. Sometimes the line went nearly around the block. My grandfather replied, ‘You have a place to sleep, food to eat and you’re warm. These people are our customers; they just can’t pay us now. We’ll keep feeding them.’ Well – that settled the question – and Ben’s survived.” 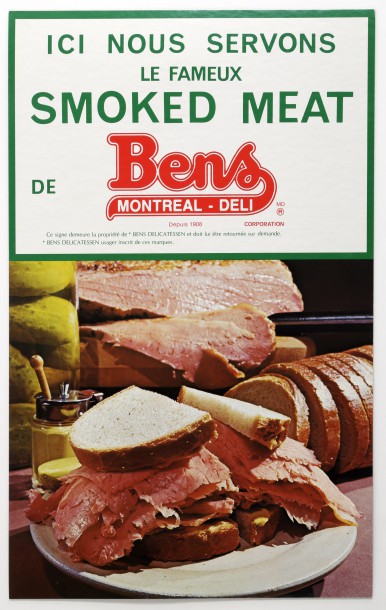 Dr. Kravitz also told of how during Expo ’67, a delegation of Russian diplomats arrived when the restaurant was completely full. “My father offered them the only table  we had – the staff table in the kitchen. He served them borscht as an appetizer; and they all smiled and thanked him. The next day they came back – an insisted in sitting at ‘their’ table in the kitchen.” Another day in the life of Ben’s…

As I toured the exhibit, my own memories of lunches with student pals, favourite relatives and interesting encounters came flooding back.  Go see this wonderful exhibition and treat yourself to your own trip down memory lane to Ben’s. I’ll bet you can still see Irving Kravitz holding up two fingers and pointing at a table. “Yes – I have two seats right here!”

Ben’s the legendary deli is on at The McCord until November 23. The McCord Museum is located at 690 Sherbrooke West (across from McGill University). For opening hours and pricing, please call 514-398-7100 or visit: www.musee-mccord.qc.ca Enjoy!