Recognized worldwide for his masterful large-scale glass sculptures, Dale Chihuly has brought his panache for glass to the Montreal Museum of Fine Arts. Running until October 20th, Chihuly: Utterly Breathtaking is a harmonious marriage of delicate glass and riotous colour.

A leading figure of the studio glass movement, Chihuly thrives on pushing the boundaries of size, length and colour. As a painter uses a canvas and brushes to create, Chihuly relies on fire, gravity, breath and centrifugal force.

While the art of glass blowing is an ancient one, Chihuly’s modern and monumental installations are often credited with elevating the craft to the echelon of fine art. His work appears in more than 200 museum collections across the globe, including: the Louvre’s Musée des Arts Décoratifs in Paris, London’s Victoria and Albert Museum, New York’s Metropolitan Museum of Art and the National Gallery of Australia.

The exhibit begins on Sherbrooke Street, outside the entrance to the museum’s Michal and Renata Hornstein Pavilion, with a five meter (15ft) high spherical piece primarily made up of yellow curling tendrils, entitled The Sun. Turquoise Reeds is the first piece you see inside the museum. Located at the top of a grand marble staircase, dozens of tall stalagmite-like turquoise tubes emanate out of fallen western red cedar tree trunks. I think this installation is best viewed by circling around the staircase and looking at it from the far side of the room. In doing so, you will walk past the Persian Colonnade, vibrantly coloured roundels arranged on white, wooden framework surrounding the staircase. Designed specifically for this setting, the Persians are large (20 to 30 pounds each) asymmetrically undulating discs with herringbone patterns, resembling flowers of red, orange, yellow and blue.

The next room features hundreds of smaller scale pieces piled atop a transparent ceiling. With light streaming through the kaleidoscope of coloured glass the walls become cloaked in a colourful patchwork. Black, super-sized bean bags in each corner of the room invite visitors to recline and bask in the multi-hued light. 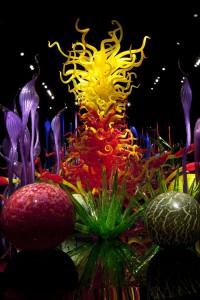 “I’m obsessed with colour – never saw one I didn’t like.”
Dale Chihuly

Four massive chandeliers and a tower hold pride of place in the exhibits largest gallery. Each, weighing several hundred kilograms, is made up of hundreds of pieces of blown glass mystifyingly secured to a steel framework. These delicate pieces of glass seem to defy gravity while appearing strong and graceful. The blue, green and white pieces remind me of curled ribbons on a present. The Ruby Pineapple, specially re-created for this Montreal exhibit, includes shapes that resemble inverted jelly fish.

The Montreal Mille Fiori, a scene born out of Chihuly’s love for his mother’s garden, is filled with many pieces from his diverse glass series: Floats (resembling large spheres), Persians and Reeds. It looks like an underwater world – an octopus’ garden, complete with seaweed, bubbles and clam shells. I can practically see the fish darting in and out of the vegetation as it sways in the ocean current.

Inspiration for the Boats installation came when Chihuly threw some of his pieces into a river and watched them float downstream. He asked a couple of boys to take their boat and go collect the pieces. Upon returning, the boys’ wooden boat was filled with glass pieces. Here in the museum on a low, black reflecting platform two boats, practically over flowing with glass pieces, re-create the scene.

In a dark gallery illuminated only by the glow of neon and argon filled white blown glass stems, Glass Forest #6 is the only installation that actually emits light – all the others only reflect the light.

The colourful Macchia, resembling inverted bonnets, seem to glow from within, as if radiating incandescent light, but the pieces are actually lit from above. Creating this effect and all of Chihuly’s site-specific installations takes a team of glassblowers, technicians, engineers, architects and project coordinators. His team took over all glassblowing duties after Chihuly was injured in two separate accidents in the late 1970’s. Chihuly now uses drawings and paintings to illustrate his designs for the glassblowers. 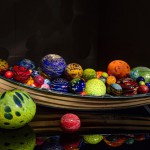 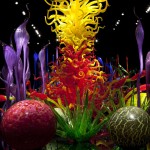 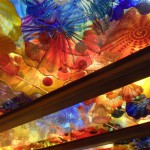 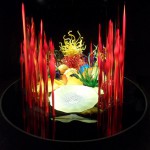