Michael Bublé recently performed to sell-out crowds at Montreal’s Bell Centre on consecutive nights as part of The Montreal International Jazz Festival, the world’s largest jazz fest and arguably one of the most prestigious. It’s an acknowledgement of his talent as a singer who transcends several genres, and yet still maintains his identity as a vocalist. At 38, he’s already won four GRAMMY Awards, many Juno Awards, and has appeared on Oprah, NBC’s Today Show, The Hour with George Stroumboulopoulos, The Colbert Report, and Saturday Night Live in addition to hosting his own television specials, and playing a major role in the opening ceremonies of the Vancouver 2010 Winter Olympics.

While he now enjoys worldwide success, back in 2000, Michael Bublé was close to washing out of the music business, but for a chance meeting that led to an important Montreal performance and networking opportunity that quite literally changed the course of his life. 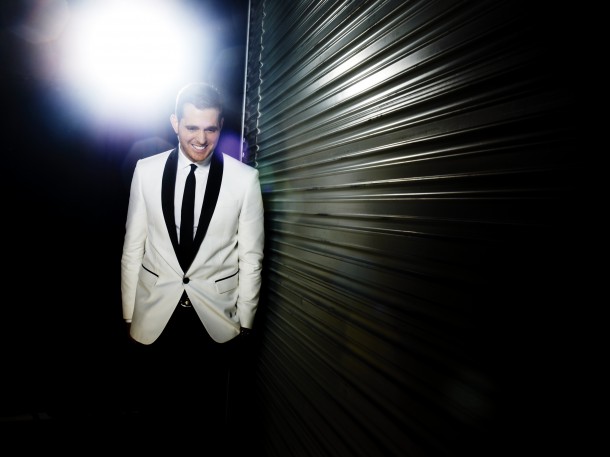 But first – let’s go back to Burnaby, BC, where Michael Steven Bublé grew up as the eldest of three children and where his father worked as a salmon fisherman. His mother Amber is of Italian descent and Bublé holds dual Italian and Canadian citizenship. Michael stated on Oprah that he knew he wanted to be a singer from age two, and that he became interested in jazz when he was just five. Like most Canadian kids – he was also an avid hockey player and fan of the Vancouver Canucks.

In addition to his youthful interest in music, Michael’s family realized that he could actually sing very well when he was 13, singing along with Bing Crosby’s version of White Christmas. His maternal Italian grandfather, Demetrio Santaga encouraged Michael’s singing ambitions, paying for vocal lessons and arranging for his first club appearances. His grandfather introduced Michael to jazz, and Michael was captivated when he heard closely knit harmonies and rhythms of The Mills Brothers. “Although I like rock ‘n’ roll and modern music, the first time my granddad played The Mills Brothers for me, something magical happened. It was like seeing my future flash before me. I wanted to ne a singer and knew that this was the music that I wanted to song.”

Michael would also learn important life lessons on his father’s salmon boat, where he spent six summers working as a commercial fisherman. “It’s the most deadly physical work I’ll ever know in my lifetime. We’d go out for two and three months at a time. The experience of working with guys twice my age taught me a lot about responsibility and what it means to be a man.”

Eventually singing won out over the life of a commercial fisherman. The singing lessons continued, and Michael entered and won a talent competition when he was 18, only to be disqualified because he was underage. Bev Delich, the competition’s organizer encouraged Michael to enter the Canadian Youth Talent Search, and he won. Delich signed a management contract with Michael, and he took every job that was offered; competing in talent shows, singing at conventions, malls, cruise ships, hotel lounges, clubs and corporate gigs. All that performing experience would eventually pay dividends. But while Delich’s management was bringing in some money, Michael’s career lacked focus and direction. It wasn’t even really a career.

Michael became a frequent guest on Vicki Gabereau’s national CTV talk show, often filling in for guests who had to cancel. On one such occasion, he impressed fellow guest Diana Krall – herself having already been nominated for a GRAMMY Award. He recorded three independent albums and moved to Toronto where the work opportunities were far more numerous. By the time he was 25 in 2000; even with three albums to his credit, Michael Bublé was considering a move back to Vancouver and a career in journalism.

Michael McSweeney, an aide to former Prime Minister Brian Mulroney saw Michael perform at a corporate function in Toronto, and received a copy of Michael’s self-financed album, which he shared with Brian and Mila Mulroney, who at the time were planning their daughter Caroline’s wedding. They hired Michael to perform at the wedding, where he also met music producer and pianist David Foster. Foster had produced recordings for Madonna, Michael Jackson, Celine Dion, Barbra Streisand, Cher, and Andrea Bocelli. Although impressed with Michael’s performance, Foster didn’t know how to market the American Songbook music very well, and he was reluctant to produce Michael.

Michael and his manager were persistent, travelling to Los Angeles to continue pressing Foster to take Michael on. Foster did agree, on the condition that Michael raised the $500,000 necessary to produce the album. And while he did secure the funding, Foster’s friend Paul Anka convinced him that Michael Bublé had the talent to be a good investment for Foster’s record label; 143 records.

From the Mulroney wedding job, Michael Bublé’s career was on a trajectory that saw him release a David Foster produced album, with Barry Gibb and the Bee Gees singing backup vocals on their own song – How Can You Mend A Broken Heart. The album that also included Moondance, Fever, The Way You Look Tonight, and For Once In My Life, went to the Top 10 in Canada, The United Kingdom, South Africa and soared to #1 in Australia. Instead of returning to Vancouver and a journalism career, Michael Bublé began touring the world as a legitimate recording star.

Subsequent hit recordings followed, and Michael began to introduce his own songs into the sessions. They not only held up to the other standards on the recording – songs like his Haven’t Met You Yet became hits. Michael’s last four albums have debuted at #1 on the Billboard Top 200, and amazing feat of staying power in the fickle world of popular music.

Michael married the stunningly beautiful Argentinean actress Luisana Lopilato in March 2011 in Buenos Aires, and they have a son Noah. It was for Luisana that Michael wrote Haven’t Met You Yet.

Michael Bublé continues to fill concert halls, arenas like The Bell Centre, Madison Square Garden and he even sells out 50,000+ seat stadiums. All this without a formal musical education. But Michael Bublé has a mountain of talent and he can sing with the conviction and panache of Frank Sinatra, and all the while, he’s our guy. He’s like the guy next door, one of us.  He makes it look that easy… Bravo!