Enjoy the value and retro intrigue of this tropical gem

Canadians, particularly Quebecers, have been enjoying Cuba’s charms for decades. The Caribbean’s biggest island, long known for its fabulous beaches, distinctive music and friendly faces, has been a popular destination for everyone but Americans since Cuba began to re-open its doors to tourism during the 1970s and 1980s. The country’s hotels and resorts had all but shut down following the 1959 revolution that brought Fidel Castro’s Communist regime to power, eradicating the corrupt dictatorship of Fulgencio Batista and a deviant society dominated by American gangsters. U.S. citizens, with some rare exceptions, have been forbidden by the U.S. government from visiting the country since the early 1960s, although their entry is not specifically banned by Cuba. 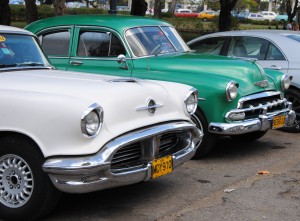 Vintage cars like these Olds and Chevy are common Photo: Matthew Elder

Cuba’s traditional tropical allure, combined with bargain prices and even the fascination of travelling to a Communist country, now brings more than 1.5 million tourists to Cuba each year. But the totalitarian system – and even the cut-rate deals – also has deterred many from choosing it as a winter escape. As frequent Caribbean vacationers, my partner and I had always chosen other sun destinations until we recently gave in to value and curiosity. The impossibly low prices for all-inclusive packages suggested dollar-store quality, and we’d been reluctant to contribute our hard-earned dollars to a Communist economy. (Indeed, Cuban law requires all resorts still to be at least 51%-owned by the government.) We worried about excessive bureaucracy and a military presence. It’s supposed to be a relaxing holiday, we’d always reasoned, not a misadventure.

But recurring reports of lavish resorts and hassle-free logistics from friends convinced us that Cuba just possibly, maybe, finally might be a good choice. They were right – although the reason has a lot to do with being cautious and heeding their advice. According to this approach, the first-time Cuba vacationer should do the following: 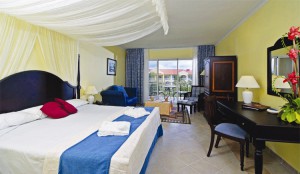 Fair enough. Follow these and other simple guidelines, and you can enjoy the savings, have fun and forget about winter.

Once we’d done our homework, we were all set with a one-week package through Signature Vacations, including Elite Plus tickets on Sunwing Airlines and seven nights at the 5-star Paradisus Princesa del Mar in Varadero. Off to Trudeau airport, smooth check-in via the priority line, no crying babies in the departure lounge and an on-time departure. We enjoyed a smooth 3½-hour flight to Varadero, plenty of legroom, a glass of sparking wine, and a decent meal with wine included. (It’s worth noting that flying with a charter carrier runs a greater risk of departure delays than with larger scheduled carriers like Air Canada. This is because they have much smaller fleets and sometimes unable to substitute aircraft in the event the assigned plane is grounded elsewhere due to weather or mechanical issues.)

An hour or so after clearing Cuban customs (a more solemn experience than at other sun destinations) at Varadero’s mid-size airport, we arrived at a resort as beautiful and luxurious as any we’d experienced on other southern destinations. Paradisus Princesa del Mar boasts a large open-air buffet dining area and a half-dozen specialty restaurants that are available for reservation at no extra charge. There are several bars, including the requisite swim-up variety and a nightclub, as well as live entertainment nightly in an outdoor plaza. In addition there are additional restaurants and bars in the resort’s Royal Service premium section. 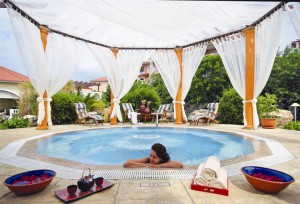 Paradisus Princesa del Mar’s other amenities include three swimming pools, hot tubs, spa, fitness centre, boutiques, tennis courts, sailing and other water sports – all facing one of the Caribbean’s best beaches. The design of and materials used in the buildings and grounds are of top quality, the food was very good (although no one should base a Caribbean vacation on gourmet cuisine), and the service attentive and friendly.

While the ubiquitous Cuba Libres (aka run and coke) are poured generously, and the evening party opportunities numerous, the adults-only resort provided a mostly quiet experience. Guests were a diverse blend of mostly English and French Canadians, Germans, Spanish and British. As Cuban first-timers, it took a few days to realize that the “Americans” at the next table or beach palapa were actually from Toronto or Regina.

As is the case at most Cuban resorts, there is no wireless internet. Web access is available via computers in an internet centre near the lobby, for a fee. While your cellphone may work via the local cell network, it’s a very expensive proposition. Calls from land lines are pricey, too. Your best bet is to buy a prepaid phone card (available at the hotel) and use that to make a call from your hotel phone.

Varadero is one of Cuba’s oldest resorts, with hotels stretched out along a peninsula stretching out into the Strait of Florida (indeed, an anxious traveler might get some reassurance knowing Key West is little more than 100 kilometres to the north). Varadero was second only to Havana’s Miramar suburb as a retreat for America’s wealthy until Castro arrived. Former elite residents included the Dupont family, whose beachfront home, Xanadu, is now a boutique hotel and restaurant.

Unlike many Cuban destinations farther east and south on the 1,200-kilometre-long island, Varadero’s resorts are a short drive to a large town (of the same name), which offers an exhilarating strolling and shopping diversion from the often-idle resort experience. There are short evening excursions available from the hotel; we enjoyed a performance by the famous Buena Vista Social Club at a local nightspot, the Mambo Club – a wonderful surprise, as it was not a regular local event. Be sure to ask your tour operator’s on-site representative about any activities that might not be mentioned in their catalogue.

A taste of Havana and Hemingway

Varadero is also a fairly close to Havana, making the fascinating capital a reasonable day trip. The two-hour drive along an excellent four-lane highway can be done via guided-tour bus, or, as we did, with a private car and driver/guide. A typical bus tour costs around 70 CUC per person and takes you to Old Havana and a few other landmarks. Some tours stay into the evening and include a show at the famed Tropicana Club and cost about 130 CUC.

A day trip to Havana from Varadero is highly recommended, even if you opt for one of the more predictable bus tours. It provides a fascinating break from the sun, sand and of course the Cuba Libres. For 160 CUC plus tip, our private Havana tour – which we arranged through our tour rep – allowed us to see what I wanted and when. 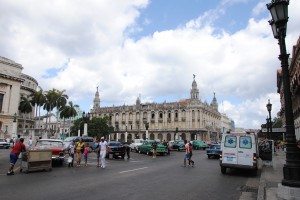 Our guide, Jorge, picked us up at our hotel in his 1990s-model small Mercedes sedan before 8 am and a few hours later we were at our first stop, Ernest Hemingway’s Finca Vigia, the farm estate south of Havana in which he lived and wrote for two decades until his death in 1961. The house’s furnishings and contents, including souvenirs from his African adventures, are said to be exactly the same as when he last was there. After an intriguing hour, we headed up the freeway to Havana, entering the city’s old section via a tunnel under Havana Bay built in 1958 by a French contractor. The many 1950s-model American cars sharing the highway lanes, along with the roadway architecture – complete with a defunct toll plaza in the style of those that used to be on the Laurentian Autoroute – provided a powerful retro driving experience.

Once through the tunnel, we suddenly were enveloped by an ancient Latin American city, a labyrinth of tree-lined streets, wide squares and many decaying structures. And, everywhere, old Chevys, Fords and Buicks. We even saw an Edsel. Among the most interesting sightings was a 1954 Cadillac convertible with a V-8 badge adorning the trunk lid – but with a four-cylinder diesel engine rattling and spewing out grey smoke from its exhaust. While some of the old American cars still are powered by an original Detroit engine, most have been re-engineered to accept a Russian-made diesel under the hood.

But this rolling automotive museum quickly became a sideshow to the archaic architectural magnificence of Old Havana. The main avenues are fairly tidy with some newer buildings. But wander down side streets and you will experience the real Habana Vieja, with its crumbling facades, hole-in-the wall shops and bars, pulsating music, and the colourful and friendly people. You’ll encounter the usual vendors beckoning you into their tiny shops and kiosks, but you’ll also come across groups of men arguing – about baseball! Nowhere are there more passionate baseball fans than in Cuba. And the debates rage over local teams, not Major League Baseball, and, this winter, Cuba’s return to the Caribbean Series in Columbia after a 53-year absence, due to Castro’s ban of professional sports and more recently MLB’s opposition to a Cuban presence.

While the best part of a Havana tour is simply taking in the atmosphere, worthwhile sights that we drove or walked by included the cathedral and its plaza; El Capitolio, the pre-Castro legislature that is a replica of the Capitol building in Washington, D.C.; either of the two fortresses, La Cabana and El Morro; the Gran Teatro opera/ballet house (although closed this year for renovations); and the National Museum of Arts. We had a drink at the rooftop bar at the Ambos Mundos, a hotel frequented by Hemmingway, and also poked our heads into his favourite watering holes, La Floridita and La Bodeguita del Medio.

Leaving Old Havana, we stopped at Plaza de la Revolución, a barren concrete expanse surrounded by government buildings, one adorned with an abstract mural of Che Guevara. While government propaganda across Cuba is less evident than the first-time visitor might expect, there is very little advertising and the only billboards you’ll see are government panels braying very dates slogans, many featuring Che but surprisingly few with Fidel.

We drove along the Malécon, the classic waterfront boulevard and promenade, and stopped for lunch at the waterfront Hotel Nacional, a 1920s high-rise gem. There are a number of other grand old hotels, including and the neoclassical Inglaterra Hotel in Old Havana’s Parque Central.

Another pre-revolution relic – albeit a modern one – is the former U.S. embassy on the Malécon. It operated for less than a decade before it was vacated by embassy staff in early 1961 after the United States cut off diplomatic relations with Cuba. It reopened with American foreign service staff in 1977 as a unit of the Swiss embassy, representing U.S. interests in Cuba.

If you’ve never been to Cuba and you’re looking for a new experience – without sacrificing the de rigueur tropical-resort amenities – there’s no time like the present. While far from certain, the odds favour an opening of Cuba to American tourists. If and when this happens, the sometimes eerie Communist element will recede – but so may many of the old cars and other retro elements. Cuba’s position as a major (and pricey) Caribbean playground for all North Americans will return – although not back to the bad old days of Batista and Al Capone. 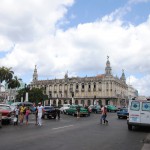 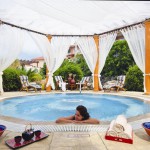 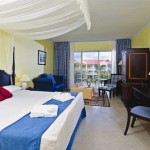 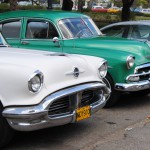 Vintage cars like these Olds and Chevy are common Photo: Matthew Elder 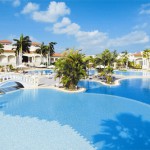 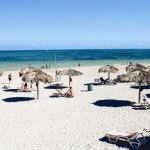 The section of Varadero Beach directly in front of our resort 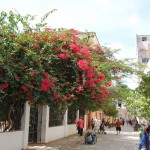