Sometimes you just don’t know what to expect when going to a play. Especially a newly written piece that has not seen a stage before.

The Book of Bob, on at the Centaur Theatre, is one of those moments – I walked into the theatre and faced a set consisting of a centre screen with two curtains spread out on either side and a lone table and chair, stage right.

Rarely do we know what is going to happen in our lives – pain, suffering, abuse, suicide, marriage, divorce, difficult kids, drugs…some of it touches us all, at some time or other. 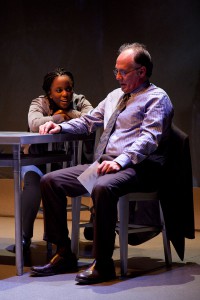 The Book of Bob is full of many of life’s challenges. One of them being a difficult job situation (very difficult), to an elderly parent’s choice of death.

Written by playwright, Arthur Holden, the Book of Bob is directed by Ellen David and stars Lucinda Davis and Ron Lea.

But wait, the play has more than two characters. Indeed, most are beautifully and adeptly played by Davis. She is God…as seen through numerous characters: a wife, a policeman, a father, a boss, a brazen young woman, and more – some with a change of voice, all with the help of projections of the characters on the screens – she morphs into each character, appearing from behind the screen, as her figure on-screen faces you. Davis, herself, is not in the costume of her character. She is dressed the same throughout. Sounds difficult and convoluted? It’s not.

It is clear, straight forward and aided by some excellent acting on the part of Lea who plays one character – a very unsympathetic Bob. He is self-indulgent, self-interested in his problems and not particularly caring of the world around him. Lea is marvelous.

Light begins to dawn upon the death of his father; but we find it difficult, in spite of Lea’s brilliant acting ability, to find any sympathy for this intellectually driven portrayal of the image of a biblical Job. (Is it really Job?)

The Book of Job is used by Holden as a metaphor for our lives, which are surely made up of the very complications seen in Job. Holden is a very clever, intelligent writer with great promise in stage writing and drama. In this piece, however, the mind may be attracted to it, but it lacks in any emotional depth that should finally pull the audience in to participate and empathize with the characters at hand.

Director Ellen David, with this difficult piece to stage (and with help of numerous experts in their field) realized a difficult, magnificent piece of intrigue. Her work is imaginative, and at moments, even spellbinding. A fine piece of work for this new director.

One must mention the tremendous creative input of George Allister and Patrick Andrew Boivin for their riveting video design and Benoit Beaulieu for his cinematography. James Lavoie’s set was clever in it’s simplicity. The technical creators really pulled together to produce this production.

On at the Centaur until March 2, The Book of Bob should certainly make you think! That’s good Theatre!