As one of the most popular museums in the city, Old Montreal’s Pointe À Callière is putting on a new exhibition that’s taken more than a few steps beyond the usual museum fare that defines this city’s obsession with its own history. Briefly put, ‘À Table’ is a timely exhibition about the evolution of the so-called French ‘Gourmet’ tradition that continues to reflect much of the French nation’s culture, its society, and its history.

“Of course the French Revolution did a lot to impose its democracy upon French cooking,” said Museum director Françine Lelièvre. “After all, it was a difficult time for the aristocracy – many of whom were losing their heads… so the cooks had to find others who were willing to pay them for their work.”

As the entire exhibition spans a culinary tradition that includes several centuries of recorded history, the opulent luxuries of a bygone age does a lot to demonstrate how some things never change. While the evidence continues to confirm that you are what you eat, the evidence also indicates that what you ate more often than not went on to define who and what you were when you joined the king for a meal. As the show opens with a quick description of three-day banquets that used to define the power of the medieval barons who used to rule the land, a guest would use his knife to cut pieces of meat of a joint and use a crust of day-old bread as a ‘trencher’ to soak up a bit of stew out of the big common pot. As ever, the rich got the best cuts of meat, while the poor were left to make sausages out of what was left of the poor beast, but nothing was wasted – a tradition that lasts to this day. 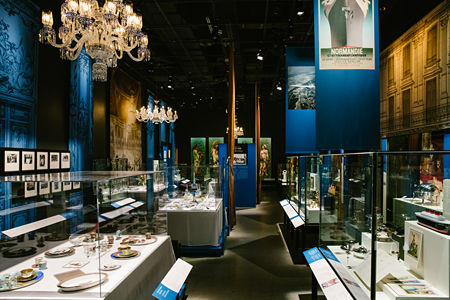 The museum gallery is as elegant as the
artifacts on display
Photo: Caroline Thibault

After King Henry II of France married Catherine De Medici, things got a little better in the king’s kitchen as the queen brought her own Italian cooks who began to add both spice and vegetables to the king’s dinner. As all of Europe began to explore the rest of the world, the ruling elites began to understand the brutal economics of empire. While the wholesale theft of Inca gold continued to finance King Phillip’s Spanish court, the rising middle class began to understand how a single ship full of cinnamon and sugar could make a man’s fortune after it made its way back from Asian shores. While black African slaves continued to spend their lives cutting sugar cane in the so-called ‘Indies’, sugar began to define the rich man’s table while it laid the base for the cakes and fine pastry that continues to define ‘la haute cuisine française’. As diabetes began to affect the ruling class, King Louis the XIV got a toothache that eventually led to a critical sinus infection that eventually killed him.

While this exhibition makes an effort to describe all of the elements that provide the culinary experience that is so much greater than a simple sum of its parts, it also alludes to what happens when the growing gap between the rich and the poor begins to define the politics of the nation. As the French aristocracy began to lose their heads, À Table takes the time to describe how the new ruling class took its place at the table. While the opulence of Napoleon’s table continues to reflect his imperial ambitions, the period’s dishes gave rise to porcelain factories that are still producing opulent dishware to this day. While the 19th century’s dinner table gave us the etiquette that’s still with us today, it also gave rise to the French culinary tradition that the United Nations recently declared to be part of the planet’s collective cultural heritage.

While it’s well worth the visit, À Table  also reminds us that money and class still have a lot to do with what goes on around the table, and while you may still be what you eat, the quality of your next meal still depends upon who you are and what it costs to put food on your table.

À table! – Dinner is served! The glorious history of French Cuisine is being presented over the summer at the Pointe-à-Callière museum in Old Montreal from June 6th to October the 13th. www.pacmusee.qc.ca