Montreal Alouettes star quarterback Anthony Calvillo has led to the team to three Grey Cup Championships, established records for touchdown completions and is the all-time leader for passing in professional football. These are tremendous athletic achievements that required training, perseverance and intellectual focus and dedication. Anthony’s view on his sport changed dramatically when his wife Alexia was diagnosed with cancer in 2007, just a week after giving birth to their second child. Anthony dedicated himself to supporting Alexia in her battle against cancer; and at the same time acting as a father and mother to their daughters.

Anthony has become the one of the greatest quarterbacks in CFL history, and now holds the record for most passing yards by any quarterback in the history of professional football. He also holds the records for the most touchdown passes and completed passes in the CFL. 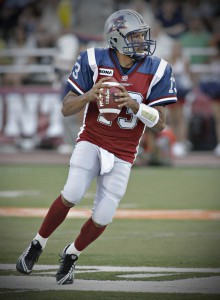 He married Montrealer Alexia Kontolemos in 2002 after dating since they first met in 2000. Anthony’s success enabled the young family to enjoy life, engaging in frequent travel during the off season.

In October of 2007, Alexia and Anthony’s seemingly charmed life together changed dramatically. A week after their second daughter was born, Alexia was diagnosed with cancer. “I had been experiencing shortness of breath, and my resting heart rate was high. The doctors were concerned that I might have a blood clot, a serious situation in itself. The X-ray revealed that I had a grapefruit sized tumour located between my lungs.”

Alexia continues; “I was diagnosed on Monday, and began my Chemotherapy on Friday. Those days are still kind of a blur… there’s the elation of having a child, the post-partum emotional swings and then this!” Alexia had B-cell lymphoma, and non-Hodgkin’s cancer of the lymph glands or nodes. There is a strong rate of recovery at 60%, but there was that other 40%…

Anthony took and indefinite leave of absence from the team to be with Alexia and the children. “Anthony stayed with me in the hospital that first week, and my Mom looked after the children. That’s the kind of man Anthony is – there was no question that he wouldn’t be with me and the children.”

“I decided not to pay attention to the percentages – my thinking was that I’m either going to make it or not. I decided that I was going to make it.”
“Because our children were so young, it wasn’t really a situation that we could talk about with them. We didn’t want them to be frightened.”

During the day, I was too busy to feel sorry for myself.  Alexia looks over towards Anthony: “But during the nights…when it was quiet, we sometimes cried. That’s when it would overwhelm you. ”
Anthony adds; “We have a strong belief in God, and our faith gave us strength to support each other.” And then with a sigh; “But it was still rough. Because I took on a lot of the household chores, I came to appreciate first-hand all that Alexia did for the children and for me.”

Alexia’s chemo sessions were every three weeks, and she would often have to stay at the hospital. “Your immune system is weakened by the chemo, and sometimes it necessary to stay in the hospital while you recover. The Cedars Institute had a room dedicated for families where we would do puzzles and pass the time while I built my strength back. The furniture was old and the décor was just a basic hospital room. It was a very clinical space. We thought that we could help raise the funds necessary decorate and re-furnish the Family Room to be a more welcoming environment.” They established the Alexia and Anthony Calvillo Fund to raise the money needed to refurbish the family room.

The Calvillos are still active supporters and fundraisers for CanSupport, the Cedars Institute support group for cancer patients and their families. “It helped us to get through this, and we want to do what we can to help other families.”

The therapy and subsequent radiation treatments were successful for Alexia, and by the spring of 2008 she was urging Anthony to rejoin the team and to resume his career. Anthony resumed his winning ways, lighting up the league with his aerial circus and winning All-Star and Most Valuable Player Awards. Anthony sustained an injury to his sternum during the 2010 season, and the doctors discovered that he had a lesion on his Thyroid, which turned out to be cancerous.

“They said that is was treatable and that I could finish out the season before having the surgery. We had been through this with Alexia, whose condition had been life-threatening.”
“At first – it didn’t really bother me. But I noticed that I became more emotional, especially during the time span of the last two games. I cried, worried that maybe there was more to this.”

The surgery was a success, and Anthony was able to begin the 2011 season in his position as the Alouettes star quarterback, easily the most pressured position on the team. Anthony credits the longevity of his career in large part to Alexia’s research into nutrition and modifying the Calvillo household diet. Out: cheeseburgers, fries, glutens, refined sugar and dairy. In: Fruits, vegetables, brown rice, less red meat and whole grain breads. “The change in diet has helped me to recover after a game much faster. I used to be wiped after a game, but now I feel like I could go out and do again.” Continuing, Anthony states; “In order to play 18 games and get up after every hit, I have to feel great. This change in diet has made a positive impact on my ability to recover.”

“As long as I enjoy getting ready for the season, can compete at a high level and get up after I get hit, I’ll keep playing.” Anthony’s love of the game hasn’t diminished – but he now has a different perspective. While he still likes to arrive at the stadium by 5:30 am. Anthony now places his family before football.