Hang a map of France on the wall, close your eyes and throw a dart – you are bound to hit one of the country’s world-renowned winemaking regions.

A Glass of Red

In the Aquitaine region of south western France, 40 km (25 miles) northeast of Bordeaux, is the charming medieval town of Saint Émilion. It is the oldest wine area in the Bordeaux region and the first vineyard landscape in the world listed as a UNESCO World Heritage Site. The town itself resembles an island rising above a sea of vineyards, surrounded by countless rows of grape vines, like waves in a rolling sea. 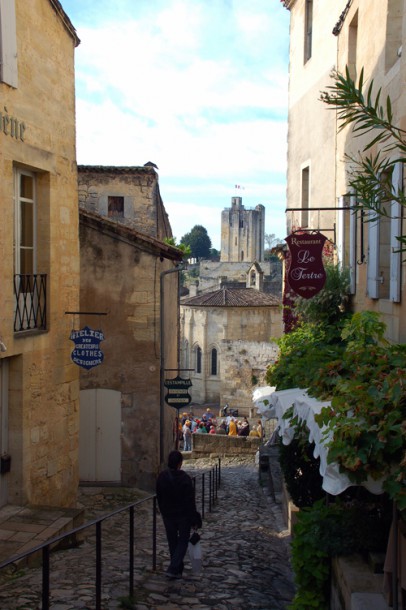 Saint Émilion is named after an 8th century Benedictine monk who settled here to live life as a hermit, in a cave he carved out of the limestone. However, he did not remain a hermit for long. By the time he passed away, seventeen years later, he had a group of monks in his charge.

During the following centuries, inspired by the cave-carving monk, the faithful of Saint Émilion carved out one of the largest monolithic churches in Europe.

Akin to a life sized three-dimensional postcard, Saint Émilion presents another picture perfect scene around every corner and down every winding pedestrian lane. Flowerpots brimming with bright pink and red geraniums accent practically every doorway and window. Lining the narrow cobblestone streets are tightly squeezed two and three story amber hued buildings. These limestone buildings and nearby chateaux were built using quarried stone from beneath the town and surrounding area. The result is nearly 200km (124 miles) of underground tunnels and galleries that now serve as naturally temperature controlled wine cellars.

In the center of town, between the rock-hewn church and a semi-circular ring of wine shops, the road widens onto the Place de l’Église Monolithe. The early morning sun, illuminating the church’s ancient facade and the soaring bell tower high above it, has not yet risen high enough to chase the shadows from the plaza.

Up on a raised section, tables, chairs and umbrellas are being set up in preparation for the busloads of tourists that will arrive by midday. Blissfully, for now I only have to share the sleepy plaza with a few locals and a hand full of visitors.

To the right of the monolithic church is a charming tertre (a local term for narrow, steep, pedestrian-only cobblestone streets). The path begins with an easy slope, but after a slight turn, the angle quickly becomes formidable. The cobblestones are slippery and slick from yesterday’s rain, but thankfully there is a metal railing in the middle of the tertre to help with the climb. Near the top, I am overtaken by the heavenly scent of macaroons wafting out from a bakery’s open door. Aside from wine, Saint Émilion is known for its delicious almond macaroons. Tradition has it that the town’s special recipe was brought here by Ursuline nuns in 1620 and has been delighting taste buds ever since. Turning left at the top of the tertre, I come to the Place du Clocher. The site, sitting atop the monolithic church, offers a beautiful view of the town, across the tiled roofs and out over the vineyards.

Filled with café tables and more vibrant flower displays, the area around the bell tower is perhaps the most exquisite spot to enjoy the merlot, cabernet franc and cabernet sauvignon blends that have made Saint Émilion wines world famous. 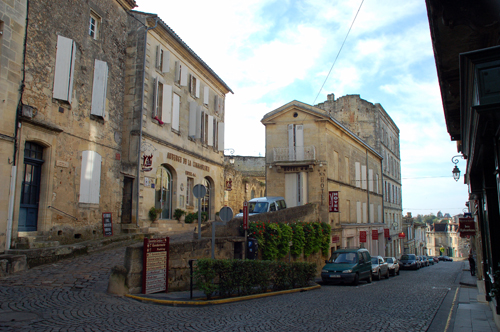 One of the many quaint and quiet streets of Saint Émilion
Credit: Julie Kalan

At the Tourism Office, across the road, you can shop for souvenirs and choose from an extensive list of area tours. Depending on the time of year and the length of your visit, options include lantern-lit evening tours, children’s treasure hunts, winemaking chateau tours, vineyard and cellar tours and the perennial favourite… wine tasting. The École du Vin even has a wine blending course that culminates with participants creating their own blend of Grand Cru.

No matter how you choose to experience Saint Émilion, you will regularly hear about the importance of terroir. Terroir refers to the unique characteristics of place that contribute to the wine: the soil, underlying rock, drainage, slope and elevation, orientation towards the sun, temperature, precipitation, humidity and wind.

The many combinations of these factors ensure that wines from a particular region are unique. I have learned that planting the same grape variety in another location, even just on a different side of the same hill will produce different wines although the wine making process may be identical.

I am most definitely not a wine connoisseur, but in my estimation, there is no better place to learn about and enjoy this garnet delight.

The city of Cognac, namesake of the amber coloured spirit, resides on the banks of the Charente River two hours north of Saint Émilion. Here in this quiet city, the cognac houses of Hennessey, Martell, Camus, Remy Martin and Otard all offer tours and tastings. However, Otard has the only tour that blends history with cognac production.

The Chateau Otard, originally known as the Chateau des Valois, is on the left bank of the river. It was the birthplace of François I, one of the most famous kings of France. He was a patron of the arts, a man of letters and a true renaissance man, but he is probably best known for convincing Leonardo da Vinci to leave Italy and live out his last years in France.

While these years were not very productive for Leonardo, the great works that he brought with him (including the Mona Lisa) remained in France after his passing. 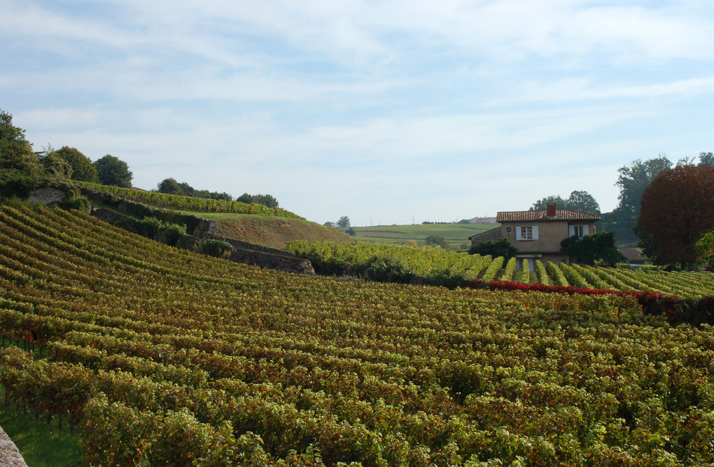 The tour begins in a tiny courtyard beside a vine-covered wall. Here our tour guide points to the ground floor window of the room where François I was born on September 12, 1494. Throughout the chateau carvings of François’ salamanders appear on the walls. A salamander seems to be a very odd choice for a royal emblem, but it was believed that the animal had the mythical ability to safely live in fire and extinguish it with its cold body. La Salles des Gardes is a long vaulted renaissance hall that bares the graffiti marks of British prisoners of war from 1756. From this bright elegant room, the tour continues down to a dark, damp cellar.

The cellar, storing large oak barrels of ageing cognac, maintains a constant 15°C (59°F) and 90% humidity, within its 3m (10ft) thick walls. The tour guide then draws our attention to the many cobwebs hanging between the barrels. She explains that, “no, it is not the maid’s decade off,” but an important and welcome aid to all cognac producers.

The spiders eat tiny worms that would otherwise bore through the casks, causing them to spill their precious liquid cargo. Apparently, the spiders often appear to be intoxicated from the alcoholic vapours. Now everyone wants to see one of these drunken spiders, but our search is to no avail. Maybe, with all the bright camera flashes, the drunken arachnids have become camera shy. 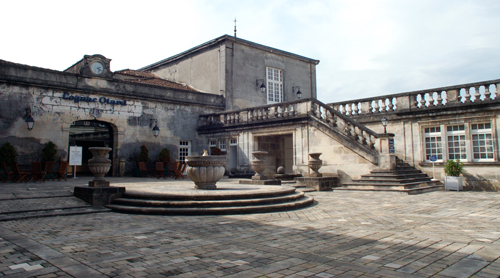 Cognac production displays fill a well-lit street level room. The process, beginning with the fermentation of the local Ugni Blanc grapes, includes the distillation in traditional copper Charente pot stills. After the second distillation, known as “la bonne chauffe,” the distiller isolates the “heart”, or middle portion, of this eau-de-vie. It is this “heart” that is aged in oak casks for a minimum of two years and a maximum of over 50 years. The eau-de-vie absorbs tannins, aromas and colour from the oak as it evolves into an amber elixir.

The eau-de-vie that evaporates during ageing is referred to as the Angel’s Share, or la part des Anges. These lucky angels receive the equivalent of 20 million bottles a year. But not to worry – the angels leave about 130 million bottles per year for the rest of us! This evaporating alcohol also feeds a microscopic fungus that blackens the stone walls of cellars and warehouses throughout the town.

In a large barrel-filled warehouse, we get a chance to smell some of the characteristic scents present in cognac. Floral, vanilla, coconut and rancio (pungent and earthy) scent stations allow us to follow the olfactory progression of ageing. The Cellar Master at each cognac house blends eau-de-vie of different ages to create their cognacs. The youngest eau-de-vie used in a blend determines in which category it can be sold: VS (very special) must be aged for at least two years, VSOP (very superior old pale) at least 4 years and XO (extra old) at least 6 years.

The tour ends in the Otard boutique, where a row of pre-filled, tulip shaped glasses have been laid out for us. Now all that is left to do is sip this nectar of the gods and toast the spirits of south western France.

The largest city in the region, Bordeaux is about three hours by train from Paris. You can rent a car in Bordeaux and drive to Saint Émilion, just 45 minutes away. It takes less than two hours to drive from Saint Émilion to Cognac. Here you can return your rental and take the train back into Paris, or any other destination your heart desires.

Air Transat has daily flight to Paris from Montreal, and Transat Holidays has a wide selection of hotels throughout Paris, plus the option of some pre-paid excursions and meals.
www.transatholidays.com They also offer packages that include car rental, hotel (or B&B) accommodations along pre-selected routes throughout various regions of France.