While many Summer Theatres start to wind down at the end of the summer or early fall, not so The Shaw Festival.  It runs strong right through October into early November with a plethora of plays to choose from. This allows travelers to take in the Niagara area and its fall colours without the onslaught of summer tourists – still providing some excellent productions to enjoy at the Festival.

If you have not been to Niagara-on-the-Lake and would like to experience superb theatre, you’ll find it here, in a gentle, quaint neighbourhood, with white houses, picket fences and gorgeous English gardens, this is the time. The Falls are about 25 minutes away in a much more commercial setting. But definitely worth a visit if you have never seen Canada’s magnificent wonder.

While the Shaw Festival was originally created with Shavian plays in mind, it also offers works by other playwrights, including musicals. 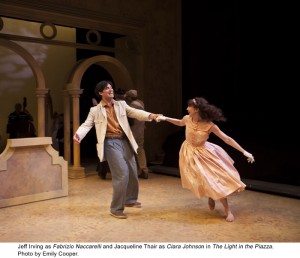 Jeff Irving as Fabrizio Naccarelli and Jacqueline Thair as Clara Johnson in The Light in the Piazza. Photo by Emily Cooper

At The Festival Theatre, you’ll find Oscar Wilde’s, Lady Windermere’s Fan – A period play that shows Wilde off at his best, targeting Victorian morals. Few use satire and wit better than he. (On until October 19) Enchanted April, by Matthew Barber, focuses on women looking for “enchantment” after the gloom left in the wake of WWI. They find it in a small castle in Northern Italy. (On until October 6) And here’s that musical you were waiting for – Guys and Dolls – with the wise guys, mobsters and gamblers, and a few other questionable characters, considered to be the greatest of all American musicals. (Closes the Festival on November 3)

The Royal George Theatre also has three productions running, Faith Healer, written by Ireland’s Brian Friel, tells the tale of a small-town faith healer who takes to the road seemingly healing the sick. Add to the story the faith healer’s wife and his manager and you have three different versions of the events. (On until October 6) Our Betters is a must for fans of Downton Abbey. A comedy, it takes a look at the European ‘spiffs and toffs’, the lies woven and affairs revealed. It has been called “the best social comedy of this century” by critic Graham Greene. (On until October 27) Major Barbara is a Shavian classic where the beliefs and morals of a daughter and father clash. Each tries to convert the other: The father wants his daughter to visit his arms factory, the daughter invites him to the Salvation Army where she works. (On until October 19)

At The Court House Theatre, something a little different to tempt the theatre goer: Trifles, a ‘whodunit’, is one of two lunchtime, one act plays, followed by A Wife for a Life (Eugene O’Neill’s first play). A husband seeks revenge for his wife’s infidelity. (On until October 12) Peace in Our Time has been adapted from Shaw’s Geneva by one of Canada’s foremost playwrights, John Murrell (Waiting for the Parade) into a contemporary political comedy “where affairs of state meet the Three Stooges”. It’s a manic, sharp and fun ride. (On until October 12)

And lastly, The Light in the Piazza is a wonderful musical about a young girl in Italy who falls in love with a young Florentine. Love is strong and blinding…things are not what they appear to be. Will the power of love win out? (On until October 13)

Now that’s a full schedule. What more could you ask for in a late summer or fall trip? With a diverse line-up of shows such as this, Niagara-on-the-Lake and The Shaw Festival have everything you need for a relaxing, cultural experience. If it’s your first time there…it won’t be your last. 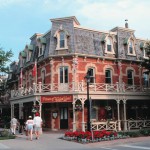 The Prince of Wales Hotel, established in 1864, offers visitors the finest in dining and accommodations. 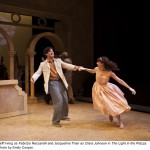 Jeff Irving as Fabrizio Naccarelli and Jacqueline Thair as Clara Johnson in The Light in the Piazza. Photo by Emily Cooper 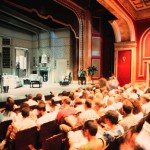 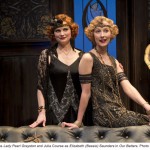 Our Betters_Claire Jullien as Lady Pearl Grayston and Julia Course as Elizabeth (Bessie) Saunders in Our Betters. Photo by David Cooper. 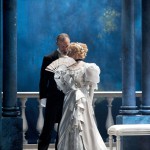