A magical journey with European Waterways through the wild Scottish Highlands, famous for its whisky, misty landscapes and history 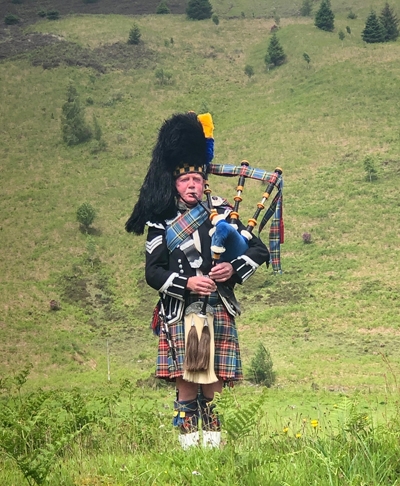 Bagpiper in the highlands of Scotland
Photo: Michele Peterson

“Today’s rain is tomorrow’s whisky,” says Georgie our tour guide as she leads us out of a downpour and into the tasting room at Tomatin Distillery near Inverness, Scotland.

There’s a lot of truth to the old Scottish proverb about rain. Here, set among the rounded peaks of the Monadhliath mountains, the soft water of the Alt-na-Frith burn meets Scottish barley to create the unique character of Highland Single Malt Scotch Whisky.

Along with my adult daughter, I’m at the start of a 6-night cruise of the Caledonian Canal in the Scottish Highlands. And we’re quickly discovering there’s no better way to experience Scotland’s magical blend of myth and landscape than on a luxury barge cruise.

Our itinerary begins in Inverness, strategically situated where the River Ness meets the Moray Firth on Scotland’s north east coast. It cruise journeys across Scotland featuring castles, whisky distilleries, battlefields and lochs as it follows the Great Glen to the west coast.

In addition to its traditional whisky distilleries, Inverness is known as the cultural heart of the Scottish Highlands. Our pre-cruise base is the Pentahotel, a design-focused hotel on trendy Academy Street in Old Town. It’s easy walking distance to 19th-century Inverness Cathedral, soaring Inverness Castle and the shops of Victorian Market. 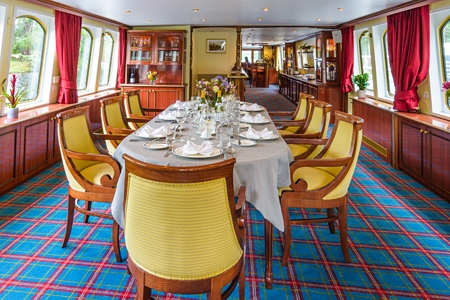 Evening is a prime time for dining on local fare at the Mustard Seed Restaurant set in a historic church overlooking the River Ness, followed by live music at Hootanany Ceilidh Bar, a traditional Scottish pub.

The European Waterways hotel barge is moored at Muirtown near the sea lock with views over the Beauly and Moray firths, home to a pod of bottlenose dolphins. Our welcome dinner takes place in the barge’s elegant dining room set on the main level of the boat with panoramic views of the canal with a formal, yet inviting, Scottish décor of tartar plaid and teak decking. 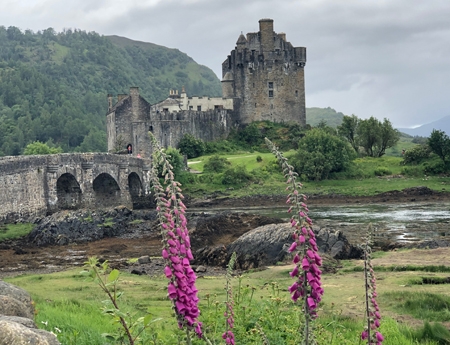 Eilean Donan is a 13th Century Castle in the
Highlands of Scotland
Photo: Michele Peterson

The set menus feature international dishes as well as Scottish classics such as Haggis, Neeps & Tatties, savoury mussels with charred corn, and buttery smoked salmon. Cheese courses include local delicacies such as an Isle of Kintyre Apple Smoke, a Connage Dairy Scottish cheddar and Blue Murder, and a creamy blue cheese famous for its bold flavour.

The next morning, we begin our passage through the Caledonian Canal by cruising to Dochgarroch. The following five days will take us onward through Loch Ness, the Fort Augustus Locks, Kytra to Laggan Locks and Neptune’s Staircase, a series of eight locks in Banavie. Our leisurely passage through the 60-mile long canal built in 1822 and lined by walking paths, tiny villages and forested hills allows us to immerse ourselves in the beauty and history of the highlands. 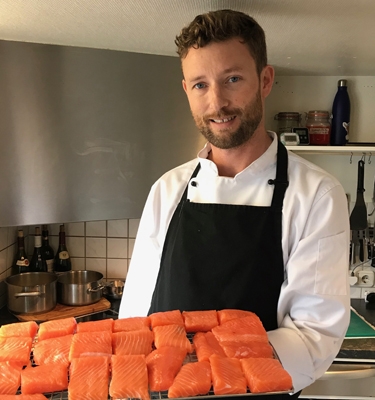 Our first excursion is one of the trip’s most evocative. The Culloden Battlefield is where Jacobite supporters, seeking to restore the Stuart monarchy to the throne, fought hand-to-hand with the Duke of Cumberland’s government forces in 1746. Stepping into the powerful sights and sounds of the 360-degree battle immersion theatre in the Visitor’s Centre, and then walking the wild moor where headstones mark the graves of hundreds of Scottish clansmen who died in battle, is a moving experience.

Other memorable excursions include an in-depth visit to Cawdor Castle, the ancestral home of the Campbells of Cawdor. Shaded by centuries-old oak and linden trees, the impressive stone castle complete with drawbridge, moat and formal gardens, dates to the late 14th century. Still family-owned and occupied, it’s filled with priceless treasures old and new.

More discoveries await at the Eilean Donan Castle, set on an island where three sea lochs meet. It’s one of the most recognised symbols of Scotland and has appeared in films such as the James Bond “The World is Not Enough” and others. The surrounding countryside dotted with grazing sheep and Highland ponies is equally stunning. 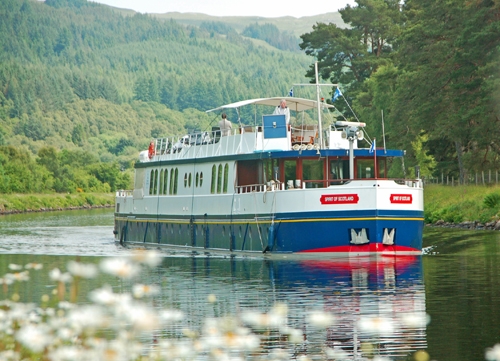 The pleasures of barge life wrap up each day. With its authentic Scottish décor, the welcoming cabins of the Spirit of Scotland come equipped with 2 single (or one double) beds, an ensuite with heated towel racks, plush bathrobes and slippers plus a spacious built-in closet, desk and bedside table of polished walnut. It radiates Old World comfort with its soft tartan throws and pillows. The upper sun deck offers panoramic views while a heated hot tub is ideal for relaxing after a day of exploring.

In addition to shore excursions, European Waterway’s fully all-inclusive plan includes onboard meals, unlimited beverages including exceptional French wines, fine Scottish whisky and other spirits, hand-crafted cocktails and more. Also included is the experience of dining ashore at The Lovat, an acclaimed restaurant located within a restored Victorian station house in Fort Augustus on the shores of Loch Ness. 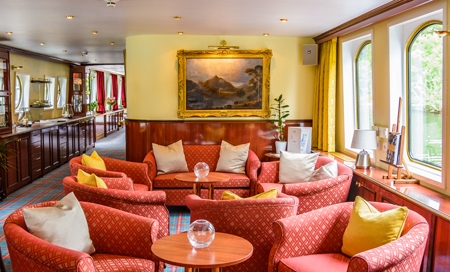 Relax in the bar lounge on the Spirit of Scotland
Photo: European Waterways

The itinerary concludes in Banavie on the southern stretch of the Caledonian Canal. The green hills of the Scottish Highlands are especially dramatic here. Ben Nevis, the UK’s highest peak is clad in snow in early June and the brisk air makes this an invigorating spot to hike or cycle using the onboard bicycles.

At Fort William, there’s the opportunity to discover more about Jacobite history at Glencoe, site of the massacre of the MacDonald clan in 1692, a particularly dark day in Scottish history. A must-see is the West Highland Museum, home to a fine display of Jacobite memorabilia and geological artifacts as well as a special themed guide for fans of the Outlander television and book series. 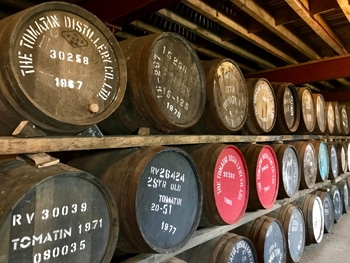 We wrap up our journey by travelling with ScotRail to Edinburgh, the stately capital of Scotland. Whether shopping the Royal Mile to touring Edinburgh Gin distillery, the sight of Edinburgh Castle, situated on a volcanic rock looming over the city skyline is never far away. Under siege for centuries and a royal residence for English and Scottish monarchies, it’s now home to the impressive Crown Jewels and Stone of Destiny.

We overnight in style at Hampton House, a Victorian townhouse in the tony West Coates neighbourhood. Its sumptuous rooms complete with whisky-themed bath amenities and deep soaking tub, original artwork, full Scottish breakfast and whisky selection of more than 100 single malts in its acclaimed Ba’ Bar lounge make it an atmospheric setting to conclude our immersion into Scotland’s heritage and culture. 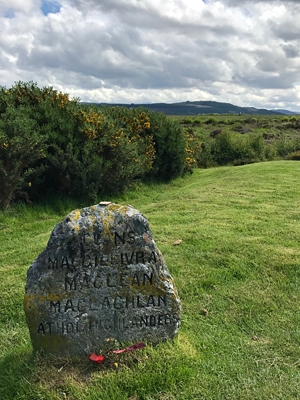 Visit the site of the 1745
Battle of Culloden
Photo: Michele Peterson

PentaHotel Inverness: A member of the Rosewood Hotel Group, this contemporary lifestyle hotel is situated in a vibrant neighbourhood of Inverness.  www.pentahotels.com

Michele Peterson is an award-winning travel writer who specializes in food, drink and sun destinations. Her work has appeared in major magazines, guidebooks and travel anthologies. Ger recipes, travel tips and tour discounts on her A Taste for Travel blog or via Twitter/Instagram @atastefortravel