What a wild time. It’s the 20th-anniversary edition of POP Montreal!  Yes it’s still a pandemic so we have to remain safe and careful but we can celebrate and be thankful that we can still go to shows and see amazing live music. What a gift!  And we have an incredible line-up to celebrate our 20th with many artists who have performed at POP over the years. Highlights include 2020 Polaris Prize winner and heavy core rap genius Backxwash; The Dears who played the first edition of POP, hometown psych-rock heroes SUUNS, one of the fiercest rappers in the game and Rhythm and Flow alumnus Cakes da Killa, the debut performance by the newest Montreal super group  ALL HANDS/ MAKE LIGHT formed by Efrim Manuel Menuck from GodspeedYou! Black Emperor and Ariel Engle from La Force, Montreal’s latest dream pop starlette Vanille;  Aiza who you may know as a superhero on the Netflix series Jupiter’s Legacy and also as Canada’s next R&B sensation; Laura Niquay who’s stunning 2021 album sung in Atikamekw and French was long-listed for this years Polaris Prize; And we are having a parade in the Mile End on the Sunday of POP Montreal so stay tuned for all the news, the show listings and events. Thank you for 20 years Montreal. We look forward to many more years of FUN!  – Daniel Seligman, Creative Director.

POP Montreal 2021 will be a hybrid festival, in-person and virtual. For in-person concerts, the current Covid-19 protocols will be applied and a health pass will be required at the entrance of the concerts. If you are planning to attend a performance, you MUST purchase your tickets online in advance. There will be no tickets available at the door. www.popmontreal.com 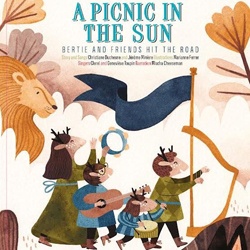 Join children’s publisher The Secret Mountain for a picnic in the sun, a paper bag puppet parade, and an animated family concert! This activity-packed day will celebrate the release of a new musical picture book, A Picnic in the Sun by Christiane Duchesne, Jérôme Minière, and Marianne Ferrer.

Start the day at Saint Viateur Park with a picnic and a paper bag puppet-building workshop. Then hit the road with your puppets for a festive puppet parade down Bernard Avenue—complete with a mini-marching band! And then, last but not least, settle in for the main event: a children’s concert at Rialto Theatre with performances by Clerel, Geneviéve Toupin, Jérôme Minière, and José Major! Plus, share a picture of your paper bag puppet with The Secret Mountain for a chance to see your creation brought to life—as a stuffed toy—by the studio-boutique Raplapla!

This year’s POP Symposium, at the Rialto, aims to envision a post-pandemic future for the music industry and the performing arts at large and will move between with big ideas, like how to create socially ethical arts industries, to the specifics, like how did anyone successfully release music without touring last year?

This edition of Film POP returns to Cinéma Moderne for an explosive big-screen showcase of the year’s best in music cinema. From portraits of contemporary icons and all-but-forgotten pioneers to deeply personal, political and experimental works, this year’s programming is all about coming together and finding ways to look forward, beyond the past 18 months.

This year’s highlights include David Wexler’s Disintegration Loops (2021), a documentary about William Basinski’s seminal album series on the 20th anniversary of the 9/11 attacks, Bobbi Jo Hart’s Fanny: The Right To Rock (2021), about one of the first all-female rock bands to know critical and commercial success, Les Blank’s newly restored I Went to the Dance (1989), the definitive film on South Louisiana’s Cajun and Creole/Zydeco music scene, and Jeremy Ungar & Ivaylo Getov’s Soy Cubana, about the Cuban acapella group the Vocal Vidas’ historic trip to perform in Los Angeles.

This year, Art POP will be hosting its annual group exhibition as well as several satellite events that will bring live performances, sound installations and poster campaigns into the public spaces surrounding POP’s headquarters at the Rialto Theatre complex. POP Reads, Montreal’s bilingual reading event, will be back again for a third edition with another great lineup of local writers and readers.

This year’s group show, //Cover Story//, will be mounted at Studio Rialto, the former dance studio turned temporary exhibition space. The exhibition will position the artist as an interrogative and investigative body that seeks to uncover lies, debunk cultural myths, and expose half truths.

As a visitor to the exhibition space, you will interact with research made visible, historical reenactments, and illusory installations attempting to demonstrate the internal processes behind artistic truth telling. Once you’ve made your rounds of the exhibition, head up to the rooftop to catch an immersive audiovisual performance by artists Peter Hernández, Suzanne Kite and John-Elio Reitman.

Outside the walls of the Rialto complex, Art POP expands into the Mile End to bring the public //Calling Planet Earth! Ligne d’alerte!//, a series of roving, site-specific radio interventions curated by artists Emmanuel Madan and Martín Rodríguez. While walking through the neighbourhood, keep your eyes peeled for //SEEKING//, a public series of posters by artist Florence Yee, acting as playful advertisements that allude to what we may seek from our community: an old tradition, a memory, a feeling, justice.