The McCord Museum has reopened its doors with a new exhibition devoted to the work of Quebec’s most celebrated cartoonist Serge Chapleau. Featuring more than 150 original pieces, the exhibition Chapleau, Profession: Cartoonist, highlights the funny side of 50 years of Quebec popular culture and current events. It’s an exhibition that promises to make people smile after months of confinement.

The first major retrospective dedicated to Serge Chapleau, the exhibition reveals new facets of the multidisciplinary, award-winning artist. Exclusive archives presented throughout the exhibition tell the story of the vibrant career he built with his incisive pen and scathing sense of humour. Themes explored in the exhibition trace the Montrealer’s unique journey, from early childhood to the various incarnations of his favourite character, Gérard D. Laflaque.

“For more than 50 years, Chapleau’s drawings have captured the spirit of Quebecers. Chapleau creates a world of fierce social satire that always makes us laugh. This is what we want to share with the public, especially at this time. Since 1996, Chapleau has donated more than 7,000 cartoons to the McCord Museum, enriching our collection of 45,000 original Canadian cartoons, one of the most important in the country,” said Suzanne Sauvage, President and CEO.

CHAPLEAU, A TO Z

The exhibition is composed of four zones that introduce the visitor to the cartoonist and his work. Fans will smile as they explore his creations and delve into the world of a profession which, still today, brightens the pages of our daily newspapers in Quebec and elsewhere in the world.

The “Youthful Indiscretions” zone retraces his beginnings as a graphic designer, his inspirations drawn from the world of comics and his collaborations with Montreal institutions, such as Les Grands Ballets Canadiens.

The second zone “Parodying Performers” is devoted to the faces of artists Chapleau has portrayed from his early days. From local celebrities to international stars, many artists in the fields of music and variety have been caricatured, including Celine Dion in all her exuberance, Jean Leloup with his extravagant attitude, Charles Aznavour and many others.

The third and largest zone is dedicated to politics, presenting almost 100 caricatures of political figures that satirically reflect key moments in Quebec and international political news over the past 50 years. Chapleau employs various drawing techniques throughout the period. From René Lévesque to Valérie Plante and Donald Trump, the artist uses pencil, pen, brush and computer-aided design software, always with a mischievous eye. The Museum is also pleased to give a voice to Chapleau’s “victims,” including Gilles Duceppe, immortalized wearing a hairnet during a visit to a cheese factory. They share with the public their reactions to the caricatures and how they can impact public image.

“And Chapleau Created … Laflaque!” The final zone tells the behind-the-scenes story of the celebrated satirical television show created by Chapleau with 3D puppets and graphic design. A colourful character, well-known to the public, Gérard D. embodied a vulgar, grumpy, irreverent, 40-something uncle-type figure for nearly 20 years on the small screen. His debut in 1982-1983 on Télé-Québec’s La minute et quart à Gérard D. Laflaque was followed by his appearance from 1985 to 1988 on Canal 10 (today TVA) in Casse-tête. He would return 15 years later in computer-generated images on the program Et dieu créa… Laflaque and then ICI Laflaque on Radio-Canada until 2019, for a total of 15 seasons. 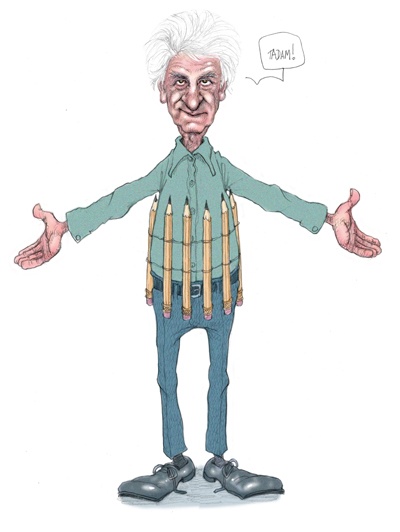 Born in Montreal in 1945, Serge Chapleau officially launched his career as a cartoonist in 1972 and quickly became a leading cartoonist in the Montreal press. A multidisciplinary artist, puppeteer, animator and television designer, he has carved out an enviable place for himself in the pantheon of Quebec humour. After studying at the École des beaux-arts de Montréal and subsequent work experience in graphic design, he made a name for himself as a cartoonist collaborating with a number of publications, including Perspectives, Weekend Magazine, Le Dimanche, Nous, L’actualité, Le Devoir, 7 Jours and finally La Presse. He became a resident cartoonist at La Presse in 1996, and after 25 years and some 6,000 cartoons, he is today a pillar of the newspaper. A 15-time finalist in the “Editorial Cartooning” category of the prestigious National Newspaper Awards, Chapleau won first prize eight times between 1997 and 2019, making him the most frequently awarded Canadian cartoonist since the prize was created in 1949.

MEASURES FOR A SAFE VISIT
The Museum adheres to strict hygiene measures to ensure visitors have a worry-free experience that doesn’t compromise their health. Among these measures, visitors can use their cell phones to access a microsite containing all the information and images previously accessible on touch screens in the exhibition halls. You must reserve your visit to the Museum by purchasing tickets online. www.musee-mccord.qc.ca/en/