“I’ve been obsessed with theatre my whole life. From the time my Dad played a cassette of A Chorus Line in the car when I was seven – I fell in love with Broadway.”

Lisa Rubin is literally jumping out of her chair with excitement as she describes how she fell in love with theatre and Broadway musicals during the opening moments of our conversation. Lisa holds the dual responsibility of Executive Director and Artistic Director at the Segal Centre for the Performing Arts; but she is quick state that she is part of a talented and dedicated management team. “My job is to be ‘the face’ of the centre. The reality is that we’re a collective.”

It’s clear that Lisa’s love of theatre is part of her DNA, her parents both loved Broadway musicals and the Arts. “My Mom took drama at McGill, and was very proud of the fact that the great Canadian actress Fiona Reid was in one of her classes.”

“I begged her to take me to New York to see some musicals when I was young. During our first trip, we saw Starlight Express and 42nd Street. It changed my life! I knew that theatre was what I wanted to do with my life. I was very lucky and privileged for the support in the arts that my parents gave me.” 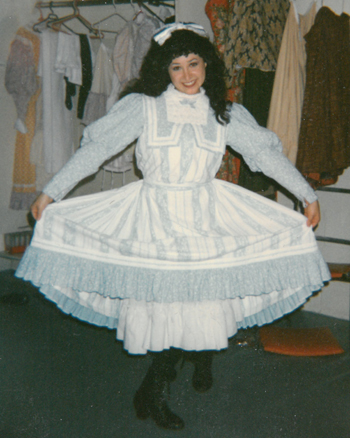 Lisa’s parents encouraged her to go to university. “Although they would have supported whatever I chose to do, they believed that having a university degree was important and so I did graduate from McGill with a BA.”

Like most university students, Lisa had a summer job. She spent three summers in Prince Edward Island, performing in Anne Of Green Gables, including the role of Diana Barry for a year, one season as understudy for Anne and two years as Gertie Pye. “Summertime in PEI is great, but I was the only Jew. I felt that carried the weight of the Jewish community on my shoulders, being the only Jewish person in Charlottetown.” Lisa’s grandparents passed away within four months of each other, her grandmother during a summer in PEI. “Going on stage and performing on the day that she passed was hard – but I got through it.”

“I came back to Montreal and got into Yiddish Theatre, perhaps because I missed my Jewish culture while in PEI. It was Yiddish Theatre that brought me back here. ”

During rehearsals, Lisa met the man who would become her husband. “The moment I met Elan, I knew that I wanted to spend the rest of my life with him…I was head over heels in love.” However, Lisa moved to Toronto to further her theatre career.

At that time, Bryna Wasserman was the Artistic and Executive Director of the Segal Centre, and she contacted Lisa with an offer of a role. “While I was living in Toronto, Bryna called and asked me to come back to Montreal and take on a role. She pulled out all the stops, saying;  ‘There’s a job in the office for you to be my assistant as well.’ So I moved back to Montreal.”

“More good things came to us. Bryna was directing Fiddler On The Roof at the Segal Centre, and she asked Elan and I to be in it. Our characters get engaged during the play, and one evening Elan proposed for real in front of the audience. Many of our friends and family were in the audience and it was a wonderful moment for us!”

“We later got married during a run of On Second Ave in New York which Bryna was also directing. We arranged for our understudies to take our roles after the Thursday performance. We came back to Montreal, got married that weekend, and we were back on stage on Tuesday.”

Lisa and her new husband Elan Kunin returned to Montreal and were kept busy in the theatre until Bryna accepted a new position at the Yiddish Theatre in her beloved New York. “When the Board brought Manon Gauthier in the new CEO, I was really pleased that she asked me to be her assistant.” It gave Lisa the opportunity to continue learning about the business side of theatre. And Lisa had some stability now that the couple had two children.

“I’m in my fifth year now, and the honeymoon is over. I’m in the scariest place – of meeting my own challenge of not being satisfied with anything less than ‘great’. We also have the challenge of meeting our budgets and of sustaining the growth that we’ve achieved. The Hockey Sweater was a major investment and a terrific success. Les Belle Soeurs was also a huge undertaking and that show is still developing, still improving. It takes seven to ten years to develop a hit Broadway show, and we’re lucky to have had the support to develop these shows.”

“We’ve always had wonderful support for the Jewish community, but Alvin Segal brought that support to a whole new level. Initially it was his desire to support Yiddish Theatre, but once he got involved here – he expanded his commitment; and his support and community leadership has been wonderful.”

Board Chairman Joel Segal is enthusiastic about the results that Lisa had generated in her first five years in the dual leadership roles; “Under Lisa’s leadership, we’ve become the largest theatre in Montreal. That’s reflected in ticket sales. This season we’ve sold all the tickets for Once and Children of God. She has an ability to tap into what the audience wants, and keeping a balance of bringing productions that are important as art, but that are also popular at the box office.” 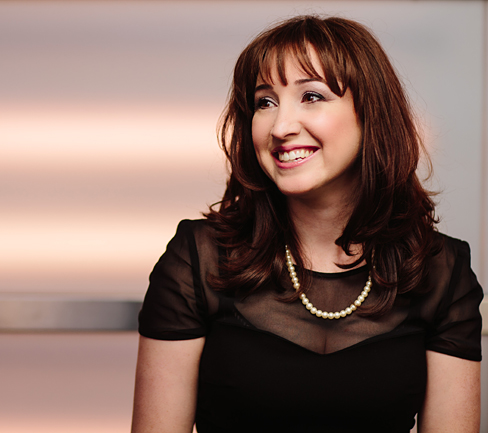 “I want all of our shows to be great!”

During our conversation, Joel offered this anecdote about Lisa’s infectious enthusiasm, backed up with her solid track record of theatrical experience and box office successes. She came to us with an idea for a musical, saying in her inimitable style; ‘It’s going to be great’. We asked a few questions and learned that beyond the outline; the script and songs hadn’t been written yet! But we said ‘Yes’ and you know what? That musical was Prom Queen and the show was a hit!” Joel adds; “She’s able to balance taking a risk and then fearlessly leading the way.”

Continuing, Joel adds a comment about another Lisa Rubin initiative called Broadway Café. “She and her husband Elan Kunin had this idea of having a pianist accompany people who wanted to come in and sing Broadway songs. At first, we had maybe 12 or 15 people, and honestly, we were a bit skeptical. But now, we’ll have 200 people during the course of the evening. And what’s really good about it, we have performers young and old spanning several generations getting together to share a common love of music and singing. It’s a warm community event.”

“In our family apparel business, our success depends in part on our ability to foster a team approach with varying disciplines that includes creative designers, manufacturing and so on. Lisa is doing the same thing here, working with creative people, the performers, and all the different people you to have working together to mount a successful production, from the moment you open the doors until the last ticket holder has left the building.”

Board Member Sylvi Plante noted the importance that musicals have played in expanding The Segal audience. “Many Francophones love Broadway musicals, and the musicals that Lisa has brought to Montreal have generated interest and ticket sales within the Francophone community. Furthermore, in just the three years that I’ve been on the Board, we’ve had very favourable reviews in Le Devoir – if you can believe it! The first was for The Angel and The Sparrow, and the second one was for Once.”

“Lisa is driving the theatre to the future, and at the same time honouring the history of the Segal Centre.” Continuing, Sylvi adds; “Lisa and her team are leading the way in Canada in terms of producing new musicals, as they did with The Hockey Sweater. She’s also bringing our Quebec culture to a wider audience with shows like Les Belle Soeurs by our beloved Michel Tremblay and The Hockey Sweater by Roch Carrier. And while shows like Old Stock are steeped in Jewish culture, the themes of resilience and honour are universal and can be appreciated by other cultures.”

Continuing my conversation with Lisa, she states: “I want to provide the English theatre that Montreal deserves. I love that theatre is always changing. That it’s a reflection of today and a reminder of the past.”

Lisa is understandably proud of the reputation that the Segal has garnered not only with audiences and donors, but also within the theatre community. “There is not a company or artist who comes here who doesn’t appreciate the way that they’re treated. We work hard to listen to and care for the artists and performers who come to our performance spaces.”

I have the happy impression that Lisa Rubin is a person suited the sometimes topsy-turvy world of theatre and entertainment. She has big dreams for the theatre and its Montreal audiences. She’s realistic enough to know that this all requires funding; but confident enough to know there’s a way. “It’s a huge lovely puzzle – and sooner or later we’ll put it together!” Bravo.

For more information about the performances and activities taking place at the Segal Centre for the Performing Arts, please visit: www.segalcentre.org Enjoy!