The Montreal Museum of Fine Arts (MMFA) presents Motion – Emotion, an emotionally evocative exhibition themed on the violence of the elements. This will be the first-ever solo exhibition of Jean-Michel Othoniel in Canada, and will present recent works by the world-renowned French artist.

Since 2016, the Museum’s visitors have been able to enjoy the Peony Knot, a sculpture on permanent display in the event stairway of the MMFA’s Michal and Renata Hornstein Pavilion for Peace. This monumental work is composed of 212 beads of mirrored blown glass and stainless steel. The orange, amber, red, pink and plum beads evoke the peony’s various shades. Suspended from the ceiling, the sculpture presents as a dynamic graphic line, a string of beads that appear to move in space. Peony Knot is the first work by the prolific artist to become part of a Canadian museum’s collection. 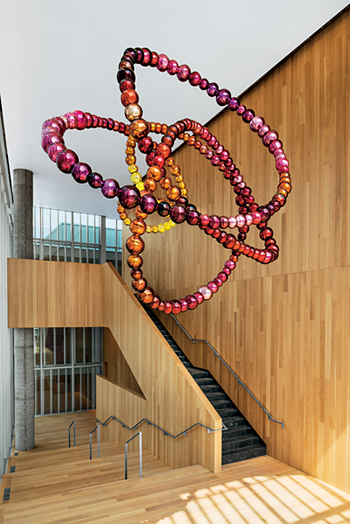 The elements and the shapes of nature have always been a source of inspiration for Othoniel. Here, however, the artist has selected sculptures and paintings that depart from a feeling of wonderment and reflect instead his preoccupying concern for the environment in works with a darker side.

Nathalie Bondil, Director General and Chief Curator, MMFA, explains: “Seeing Jean-Michel’s latest production during a recent visit to his Paris studio, I wanted to invite him back to the Museum. I was impressed by the graphic power of his tornadoes and waves… a humble homage to mighty Nature and the violence of the elements in these precariously balanced sculptures.”

In 2011 in Japan, Othoniel experienced the Fukushima earthquake and tsunami first-hand. This incredibly intense and moving event subsequently influenced the artist’s work on an unconscious level, and he turned to materials such as obsidian, a type of volcanic glass, anodized black aluminum and ink painting on gold leaf. “I am moving away from playful, colourful and ornate works and focusing instead on darker subjects, with an even more radical, minimal and telluric approach. While my works can sometimes evoke a story, they now have a dark side,” explains Jean-Michel Othoniel.

His monumental Tornadoes in chromed aluminum or mirror-polished stainless steel, four of which are suspended in space like mobiles in the Contemporary Art Square, surround the viewer as they approach them. Through their twisted motion and imposing size, they evoke the violence of the elements. The reflective surfaces that characterize most of Othoniel’s works engage the viewer in a dialogue with architecture and the environment. As they get close to the sculptures, viewers see their reflections infinitely multiplied. These gigantic mirrors can thus be seen to reflect our personal fears and desires.

The artist wanted to take this idea even further for the Montreal exhibition: To keep his Tornadoes moving, he mechanized them with the help of engineers. In doing so, he integrated a fourth dimension to his sculptures – movement. His suspended Tornadoes rotate in space and move as people pass by. Instead of the tornado blowing people over, it is the people around the tornado who set it in motion.

Born in 1964 in Saint-Étienne, France, Othoniel has been creating in a wide range of techniques for over 30 years. “An exceptionally versatile creator – choreography, drawing, writing, installation, performance, photography and sculpture – Jean-Michel Othoniel stands apart for his highly poetic imagination. In his view, the signature beauty and marvelousness of his works are not an aesthetic feature but a necessary condition for their existence. He uses beauty as a weapon in addressing serious and societal themes, fully embracing this genre,” adds Diane Charbonneau, curator of the exhibition and Curator of Modern and Contemporary Decorative Arts, MMFA.

The artist makes no secret of the fact that the kinetics of American Alexander Calder’s mobiles have been a major source of inspiration for him. Incidentally, the MMFA will be exhibiting Alexander Calder: Radical Inventor from September 22, 2018, to February 24, 2019. “I’m very pleased and honoured that an exhibition on Calder is being presented at the same time as mine. This will be my first ‘discussion’ with the artist, in which our mobile sculptures engage in dialogue at the same time in the Museum. Calder remains the master of the mobile and reinventing it is a true challenge,” says Othoniel.

The exhibition Motion – Emotion also features a selection of seven paintings from the “The Knot of Shame” and “Black Tornadoes” series, demonstrating the same formal concerns, including outlines, gestures and patterns, as well as their luminosity and materiality. They reveal the artist’s progression from his creation of Peony Knot and works from the “Black Tornadoes” series. With seemingly expressive simplicity, the subjects of this series depict “the purity of the peony sullied by ink, as the world is sullied by humans,” explains the artist.