Montreal, August 28th, 2013 – The Segal Centre will swing into its 2013-2014 Theatre Season with the Tony Award-winning musical Ain’t Misbehavin’, The Fats Waller Musical Show, conceived by Richard Maltby Jr. and Murray Horwitz. Presented in Montreal for the first time in over twenty years, this classic jazz-age musical revue is revived at the Segal Centre under the direction of Roger Peace and featuring a stellar cast led by Kim Richardson and Toya Alexis. In co-production with Copa de Oro Productions and sponsored by KPMG, Ain’t Misbehavin’ runs from September 29th to October 20th, 2013 in the Segal Theatre.

The inimitable Thomas “Fats” Waller rose to international fame during the golden age of the Cotton Club and the Savoy Ballroom, when the nightclubs of New York were filled with stride piano players banging out that jumpin’ new beat, swing.

Three-time Tony Award-winner Ain’t Misbehavin’ is a musical tribute to the great jazz pianist Fats Waller and his iconic tunes that defined an era. From “Honeysuckle Rose” to “The Joint is Jumpin’” and “I Can’t Give You Anything but Love”, a quintet of irresistible talents invites us to experience the delightful humour and infectious energy of the legendary jazzman and 1930s Harlem at the height of its social and cultural renaissance. Sassy, sizzling, and irresistibly feel-good, Ain’t Misbehavin’ is simply unforgettable.

After the success of The Mahalia Jackson Musical, written and directed by Roger Peace, last Spring, the Segal Centre once again collaborates with Copa de Oro Productions, and Mr. Peace, to bring this 1978 Broadway classic to life. “I want to present to our audiences the joy, wit and the exuberance, together with the occasional touch of raunch – of Fats Waller’s wonderful music. With the great cast we have, I hope to bring something a little different to some of the musical numbers, while still keeping the fun and energy of the songs,” says the veteran director of over 100 stage productions, including the award-winning Piaf: Love Conquers All. 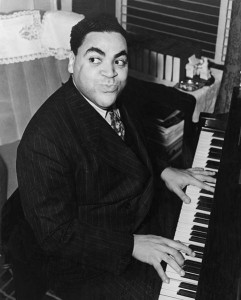 fter wowing critics in the French-language adaptation of Hairspray at Théâtre St-Denis, Kim Richardson leads the dynamite cast in the role originated by Broadway diva Nell Carter. The three-time Juno Award-winning singer has performed alongside the country’s top artists and most recently appeared in the feature film Funkytown, also recording and co-writing the song “Waiting For Your Touch” for the movie’s soundtrack.

This new production will give Montreal audiences the chance to discover rising powerhouse singer and actor Toya Alexis, featured in the role originated by Armelia McQueen. Runner-up in CTV’s Canadian Idol in 2003, Alexis gave a critically-acclaimed performance as Effie in the Canadian/London production of Dreamgirls.

Fats Waller’s infectious tunes will have the joint jumping with a five-piece band live on stage, under the musical direction of Chris Barillaro (Schwartz’s:The Musical). The original cabaret-style luster of the iconic New York nightclubs will shine on the Segal stage with a set design by Jean-Claude Olivier, lighting by Peter Spike Lyne and costumes by Karen Pearce.
Ain’t Misbehavin’ inaugurates the Segal Centre’s 2013-2014 theatre season, which continues in November with a new production of Shakespeare’s Othello, in association with Scapegoat Carnivale Theatre.

Sunday @ the Segal
Go beyond the Stage with Ain’t Misbehavin’ creator Murray Horwitz!

Thomas “Fats” Waller (1904-1943) was an African American jazz pianist, organist, composer and comedic entertainer. Born in New York City, he studied classical piano before apprenticing with the legendary jazz pianist James P. Johnson, who introduced Waller to the world of New York rent parties and the Harlem Stride style. Waller became known as one of the very best who ever played in the stride style, a jazz piano style that came to characterize music during the rise of the Harlem Renaissance, an era of burgeoning creativity, cultural awareness and ethnic pride. Waller soon gained recognition for his songwriting and lovable, roguish stage personality, recording a number of hit songs with his own five or six-piece combo Fats Waller and His Rhythm, including “Squeeze Me” (1919), “Ain’t Misbehavin” (1929), “Blue Turning Grey Over You” (1930), “Honeysuckle Rose” (1929), “I’ve Got a Feeling I’m Falling” (1929) and “Jitterbug Waltz” (1942).

He often collaborated with Tin Pan Alley lyricist Andy Razaf, played with many performers, from Erskine Tate to Bessie Smith and Louis Armstrong, and appeared in a number of feature films, most notably Stormy Weather in 1943. Weighing close to 300 pounds, Waller’s weight and drinking were widely believed to have contributed to his death; he died at the age of 39 aboard an eastbound train near Kansas City, Missouri.

About the Segal Centre for Performing Arts

The Segal Centre is a meeting place for all of the performing arts, showcasing the best professional artists from here and abroad and playing a leading role in the artistic development of Montreal’s youth and the creation of its cultural legacy. Through theatre, music, dance, cinema and the Academy, the Segal Centre is setting a broad vision by recognizing the importance of building bridges through the arts and supporting multicultural projects in Montreal. The Centre’s commitment is to ensure that creativity resonates within our community and that it remains accessible and inspiring each and every day. segalcentre.org

Copa de Oro was officially established in January 2010 by producer Allan Sandler and Roger Peace. The company was formed with the express vision of signing and presenting original musical and theatrical works for the legitimate theatre. Although the company is relatively new, these faces have been around a long time and represent a wealth of experiences in both the theatrical and musical arenas, both here

Ain’t Misbehavin begins on September 29 through to October 20, with matinees on Wednesdays and Sundays.
Tickets 514.739.7944 or online: www.segalcentre.org