A call to action for our times, Payam Akhavan’s 2017 CBC Massey Lectures, In Search of a Better World,  is a powerful survey of some of the major human rights struggles of our times- and what we can do about it.

Renowned UN prosecutor and human rights scholar Payam Akhavan has encountered the grim realities of contemporary genocide throughout his life and career. Deceptive utopias, political cynicism, and public apathy, he says,  have given rise to major human rights abuses: from the religious persecution of Iranian Bahá’ís that shaped his personal life, to the horrors of ethnic cleansing in Yugoslavia, the genocide in Rwanda, and the rise of the Islamic State.

But he also reflects on the inspiring resilience of the human spirit, and the reality that we need each other, to set us free from ideology and go about building that better world.

A timely, essential, and passionate work of memoir and history, In Search of a Better World is a tour de force by an internationally renowned human rights lawyer.

About the 2017 CBC Massey Lecturer: 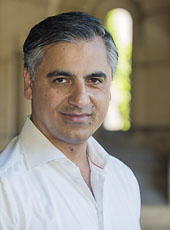 Payam Akhavan is a Professor of International Law at McGill University in Montreal, Canada, a Member of the International Court of Arbitration, and a former UN prosecutor at The Hague.

He has served with the UN in conflict zones around the world, including Bosnia, Cambodia, Guatemala, Rwanda, and Timor Leste, and as legal counsel in landmark cases before the International Court of Justice, the International Criminal Court, the European Court of Human Rights, the Supreme Courts of Canada and the United States.

He served as Chair of the Global Conference on Prevention of Genocide, and he’s a Founder of the Iran Human Rights Documentation Centre. In 2005, he was selected by the World Economic Forum as a Young Global Leader.

Payam Akhavan was born in Tehran, Iran, and migrated to Canada with his family in his childhood.

Massey Tour 2017
Lecture 3
The Will to Intervene

“There is nothing random or spontaneous about radical evil; it is a conspiracy of prodigious proportions”

In the 1990’s the world watched in horror as the Hutus of Rwanda massacred their neighbours, the Tutsis.There was no great will to intervene, but Payam Akhavan was part of the creation of the International Criminal Tribunal that might bring war criminals to justice in the aftermath of the killings. What causes such atrocities, and who are the people who do these things to each other? And what can we learn so these things don’t happen again?

“Cockroaches and lice, snakes and rats, the dehumanization of others is always a precondition for their destruction. We cannot harm those for whom we have empathy.”