As a musical artist, Bruce Cockburn has an unusual dual ability to write compelling songs and also be reconized as an exceptional guitarist. He has won twelve Juno Awards and received an impressive number of Honourary Doctorate Degrees for his work as a musician, composer and humanitarian. He is respected for his activism on issues from native rights and land mines to the environment and Third World debt. He supports organizations such as Oxfam, Amnesty International, Doctors Without Borders, and Friends of the Earth. His musical success has provided Bruce with the recognition and platform that provides media coverage when he expresses his views.

“As a kid, I was influenced by rock ‘n’ roll artists like Elvis, Buddy Holly and Gene Vincent. This was a few years before The Beatles burst onto the scene. I wanted to play music, and started taking guitar lessons. While I was still a teenager, I was exposed to jazz and studied jazz guitar and composition at university. That formal education has helped me as a composer and of course as a musician.” 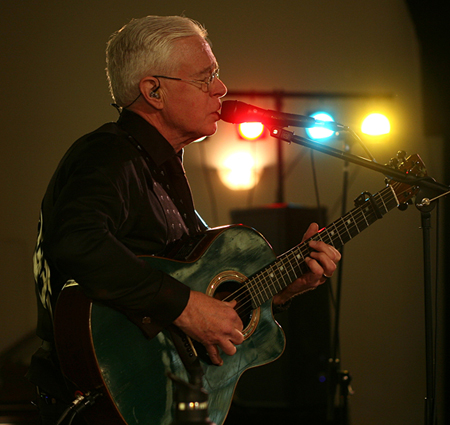 Bruce’s travels to developing countries such as Guatemala, Mali, Mozambique, and Nepal to support his social activism efforts also exposed him to different world-beat rhythms that have been incorporated into his music.

“I had a hand-shake agreement with True North Records when I first started with them in the 70s. My songs were played almost exclusively in Canada, and my performances were in Canada. There are only so many large cities to play in – so I had lots of time to write new songs. True North signed with Columbia for distribution in the US; and at the same time; I Wonder Where The Lions Are became a North American hit. All of a sudden I was touring for longer periods of time and had less time to write. But Columbia wanted an album or more per year so that we always had something in the musical pipeline. We compromised with an album about every eighteen months.”

“Most of what I have to say is reflected in my songs. I write partially from experience – but also as a witness to experiences of injustice and conflict that I have witnessed – even though I personally didn’t have those experiences.

Bruce has performed for Canadian troops in Afghanistan, at the Kandahar base. “Instead of buying a Corvette in middle-age, my brother joined the Canadian Army as an army doctor when he was 55. So I went with Guy Lafleur and some other performers and hockey players to do a show; and it was a surprisingly fantastic experience. Since then I have travelled to several war zones to entertain our troops, and I’m impressed with how smart and well-educated our soldiers are.”

Bruce has a new album titled Bone On Bone, and he is touring with drummer Gary Craig, bassist John Dymond and his nephew John Aaron Cockburn playing accordion. Bruce Coburn will perform at Club Soda on Tuesday, September 19, with Terra Lightfoot opening the show. Tickets are just $49.50 plus service charges, available at: 514-288-1010, www.clubsoda.ca or at the Box Office: 1225 boul. St-Laurent.