“Take up running” are three words that changed Don Ross’ life. The Dorval resident recently completed a marathon in Antarctica, making him a member of the elite Seven Continent Finisher group of marathon runners. I recently spoke with Don about his 30-plus marathons and how he got started.

“I was always active, but tore my acl playing hockey. I also loved to eat and I gained a lot of weight after the surgery to repair my knee. I was on a cruise and was astonished when I saw a photo of myself, and to see how much weight I’d gained! When I expressed this concern to my friends Cindy and Wes; they said, ‘Take up running’ I joined the Running Room and the Beaconsfield Cycling Club and started getting active; losing 45 pounds in the summer of 2007.” 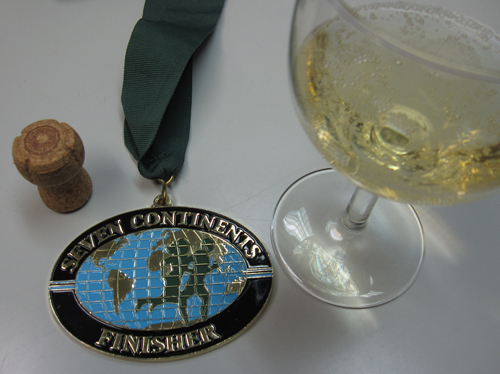 Don ran a 10 km race in Kingston that same summer, and with his friends’ encouragement, he registered for the 2008 Boston Marathon. Friends Cindy and Wes drove Don to Boston, for that first race, and since then Don has participated in more than thirty marathons all around the world. “I’ve run marathons in Berlin, Chicago, New Zealand, The Great Barrier Reef, The Great Wall of China, Europe, Spain, Ireland, South Africa, and even one at Disney World in Orlando. “The call that one the Goofy Challenge. You run a half marathon on Saturday and a full marathon the next day on Sunday.”

“I’ve met some wonderful people on my travels to run. Karen and Mark are a couple I’ve become friends with, and we decided to book the Antarctica Marathon when we were participating in the Great Wall Of China Marathon. We booked four years in advance to the race that I just completed a few weeks ago.”

As you may imagine, the weather conditions in Antarctica are a significant challenge to the runners at the best of times. The weather during Don’s run was plain awful. “We had sixty mile-an-hour headwinds for a good part of the course. At one point I was running downhill, and it felt like I was almost standing still. Every so often along the course; there are Penguin Crossing signs. Penguins have the right-of-way, and the runners had to stop and wait for them to cross. They follow one-another in single file – so that slowed us down!” 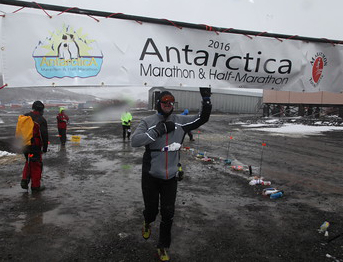 Don crossing the finish in
a driving wind

“A fierce storm started to brew, and I’ve never experienced such a dramatic temperature drop. The weather got so bad that the organizers had to shut it down, just 8 minutes after I finished. We literally had to run for the zodiacs to get back to the ship. My water boots were taken by someone else – and so I ran through this ice-cold water to hop into the Zodiac. I was so cold from the spray that I couldn’t bend my fingers or raise my arms when we got to the ship. The sailors had to climb down and sort of hand us up to other crew members. I felt really bad for the people who didn’t finish before the race was shut down. Imagine booking 4 years in advance, spending all that money and them not being able to finish!”

The Antarctica race marked the seventh continent that Don has participated in, earning him a position in the elite club of marathoners who have competed on Seven Continents.

Don doesn’t consider himself to a great runner; “Just in my home club there are several runners who are better than I am. I’m not married, don’t have children, and so it’s easier for me to put in the training time and then to travel around the world to the races.” Don also credits the support he receives from his family and friends who assist him in his training, travels and races. 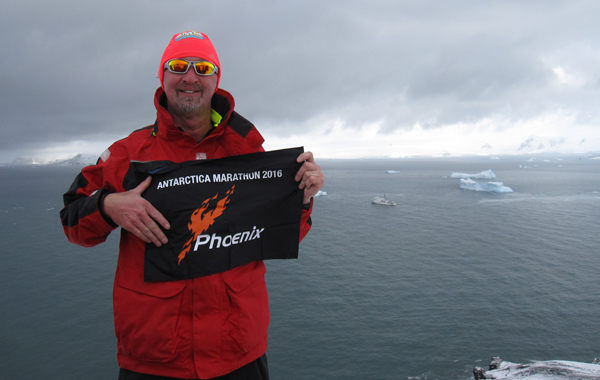 In August 2015, Don developed sarcoidosis, a rare disease that causes inflammation of internal organs. In Don’s case it has affected his lungs and heart. “I ran 35 km and a week later I couldn’t walk. At one time I actually thought that was going to die.” Don was hospitalized for five months, and credits the company where he works for holding his job for him. Don has also agreed to be a case study for the doctors and researchers as they try to understand more about the disease. “If I can help even one person to live a better life – I’ll feel good about that.”

Don ran his first marathon to honour his mother – who passed away when Don was just ten years old. “My knee started to hurt while I was running in that first race – and I thought I might have to drop out. I said a little prayer – and asked for help. The pain went away and I finished the race – my first. Who knows how or what happened, but I was able to finish. ”

Don Ross is an inspiration for us to take on challenges and meet them head-on. Sometimes as a hobby and on other occasions – as a life challenge.