Joliette could claim to have a good number of musical organizations active in 1975: a cultural center that supported the city’s concert activity, several music schools, three youth orchestras, a summer music camp, a regional music competition, several choirs ̶ in other words, a musical setting waiting for something more to happen. The opportunity for this “something more” happened in the summer of 1977, when Father Fernand Lindsay, Clerc de St-Viateur and Director of the Cultural Center, took a chance in having the Montreal Symphony Orchestra come out and give three concerts in the Joliette cathedral. The audience received the Orchestra warmly, so it was time to move ahead. Recalling European festivals he had visited a few years earlier, Father Lindsay saw that the opportunity to make his dream come true had arrived.

The festival began in 1978. Over time, the Festival grew in renown, garnering praise from critics and music lovers alike. It was not long before Father Lindsay could write: “The Festival has truly become international.” By this time Marilyn Horne, Frederica von Stade, and Rudolf Nureyev had appeared in Joliette!

And so it became the largest classical music festival in Quebec, ranking with the finest festivals of its kind in Europe and the United States. Its summertime season provided artistic and cultural energy for the province, its attendees came from everywhere. “If one wants to hear great music during the summer,” noted Father Lindsay, “one must come to Joliette.” Music lovers in constantly increasing numbers agreed.

To open the Festival’s 40th anniversary season, Alain Lefèvre, Kent Nagano and the Orchestre symphonique de Montréal join forces on the stage of the Amphithéâtre Fernand-Lindsay for a most enjoyable and stimulating concert.

Jean-Willy Kunz, organist at Montreal’s Maison symphonique, opens the concert with a work by Samy Moussa called A Globe Itself Infolding. Then Alain Lefèvre performs Ravel’s Concerto in G, followed by Kent Nagano conducting the Orchestre symphonique de Montréal in Mahler’s magnificent Symphony No. 5 for a splendorous end to the evening. 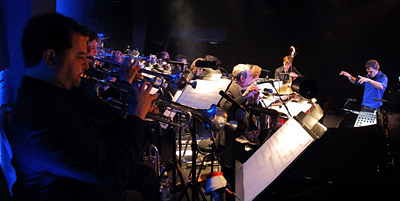 INTO THE HEART OF BIG BANG JAZZ
Amphithéâtre Fernand-Lindsay
Sunday, July 16 at 2 p.m.

On a fine Sunday afternoon, the Orchestre national de jazz de Montréal led by trombonist Jean-Nicolas Trottier takes you into the heart of the Big Band jazz era with a program of Glenn Miller classics like In the Mood, Moonlight Serenade, Tuxedo Junction and many more.

On July 21 at 8 p.m., at the Amphithéâtre Fernand-Lindsay, Marc-André Hamelin takes you into a world of passion and fantasy with sonatas by Haydn, Feinberg and Beethoven, finishing off with Schumann’s Fantasy.