Now through January 19, 2014, the Montreal Museum of Fine Arts presents Splendore A Venezia: Art and Music from the Renaissance to Baroque in the Serenissima. The exhibit’s lengthy name mirrors its vast scope – exploring the relationship between art and music during the last 200 years of the Venetian Republic.

“In Venice, in the same way that one cannot feel except in music, one cannot think if not in images,” Gabriele D’Annunzio wrote in an ode to Venice.

A large table-top, back-lit map of Venice marks the introduction to the exhibit. In black and white except for the bright blue optically-flowing canals, the map rests on a series of wooden pylons. In this simple display we are cleverly shown Venice’s unique physical attributes.

All in a Doge’s Work

It is then on to make the acquaintance of Venice’s famous Doges. Titian’s Portrait of Doge Francesco Venier shows him as a weary old man in heavy golden robes and matching ducal cap (unmistakeable due to a raised bump at the back). In contrast to the Doge’s aged and worn face, his hands still pronounce the strength of his position. The Doge was the elected leader of the Republic of Venice and remained so until his death. It was under this system that Venice flourished as a port city, developing its wealth from mercantile trade and keeping a relative autonomy from the Pope. This combination led to a more liberal society that welcomed new technologies and ideas. Unfortunately, along with new ideas the sea trade also brought plague carrying rats that devastated the population of Venice on more than one occasion.

Civic and religious events were marked by ceremony and processions. Canaletto’s The Bucintoro at the Molo on Ascension Day depicts the gold-covered vessel that the doge used for the annual “Marriage to the Sea” ceremony. Symbolizing the Republic’s reliance on the Adriatic Sea, the doge would drop a ring into the water on the Feast of the Ascension. Multiple Canaletto pieces are on display and each of them shows his incredible detail, clarity and an almost photographic style. 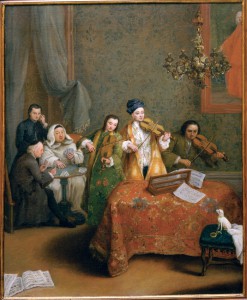 Music was an integral part of all aspects of Venetian society and so earned its place on Venetian canvasses as well. Cariani’s The Lute Player shows a young man playing the lute in a peasant, pastoral setting, though his fur rimmed attire reveals his noble class. Tiepolo’s The Minuet expresses the jovial masked antics of carnevale, which ran from just after Christmas until Lent. I found myself drawn to The Concert by Longhi, an artist known for his small scale paintings of Venetian daily life. This piece shows three musicians intently playing, while their likely audience plays cards. The only one paying any attention to the musicians is a tiny white dog in the bottom right of the painting.

Amongst the approximately 120 paintings, prints, drawings and musical manuscripts on display, in this original exhibit produced by the MMFA, are several historical instruments. Most memorable are a portable, legless harpsichord-like instrument from 1574, called a polygonal virginal; a stringed lute-like instrument from the early 1600’s that stretches well over five feet long, called a theorbo; and a bowed string instrument from the second half of the 18th century that closely resembles a violin, but has a set of six playing strings and a set of six sympatric strings, called the viola d’amour.

Get the full experience by using the free audio player to hear selections from the likes of Vivaldi, Monteverdi, Albinoni and Gabrieli, as you make your way through the exhibit.

A Symbol of the city

Over time certain things become indelibly linked in our collective psyche: mention Egypt and one instantly pictures the pyramids, mention Paris and it is the Eiffel Tower that comes to mind. For Venice that unbreakable bond is with the gondola, gliding along the narrow canals. The romantic scene of black, flat-bottomed boats rowed through narrow canals. On loan for the exhibit, from the Guy Laliberté Collection is a traditional Venetian gondola dating from the late 20th century. Viewed through openings in the wall, as if looking out on to the canal, this handcrafted boat is over 35 feet (almost 11m) long.

“A realist, in Venice, would become a romantic by mere faithfulness to what he saw before him.” – Arthur Symons, British poet and critic

In 1637, the world’s first public opera house was opened in Venice. Employing set builders, costumers, stagehands, singers and musicians, Venice’s many opera houses soon became an important part of the Venetian economy. The mythology that inspired and was celebrated by many of the operas was also a regular subject for paintings by artists like Tintoretto and Tiepolo.

A piece by Antonio Codognato, entitled View of the Magnificent Scenery and Lighting of The Teatro San Samuele, shows the elegant stage design and surprisingly long candles that were used to light the grand space. A humorous group of caricatures by engraver and critic Antonio Maria Zanetti the Elder, depicts the era’s opera stars. My personal favourite shows Caffarelli, a famous castrato opera singer carrying the opera house on his back. Apparently he thought the success of the opera house rested solely on his shoulders.

The curtains closed on the Most Serene Republic of Venice in 1797, when Venice was surrendered to Napoleon, but Splendore A Venezia continues at the MMFA until January 19, 2014.

To get the most out of your visit join one of the free volunteer guided tours.
For information on exhibit times, guided tours and ticket prices, please visit www.mbam.qc.ca 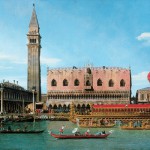 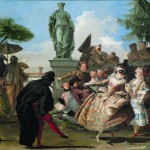 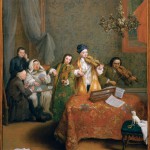