A successful life as a singer, songwriter and performer is balanced with an innate business sense.

“Adversities for me are the times when I get stronger. I sang Diana for a talent agent and he told me that it was the worst song he had ever heard. That comment just made me want to work harder to record that song…” In 1957, sixteen year old Paul Anka’s recording of Diana rocketed to #1 in North America, Great Britain and Europe; launching a wildly successful career in music that continues to flourish. “I got lucky when I was a teenager and I’m still here.”

Paul Anka told me this anecdote as he and I were enjoying a long conversation about his multi-faceted career that has seen him evolve from a teenage star to a Las Vega performer, a ‘junior’ member of The Rat Pack, a much sought-after songwriter and a sophisticated performer who travels the world with his big band. It’s an incredible story of determination, talent, self-confidence and humanity.

Paul followed his breakout 1957 hit Diana with Crazy Love and then Puppy Love (#2) in 1958; but he really began to soar in 1959 when he dominated the charts with Top Ten hits that included Lonely Boy (#1), Puppy Love (#2) and Put Your Head On My Shoulder (#2). He toured by bus in The Cavalcade of Stars that also included Buddy Holly, Frankie Lyman, Chuck Berry and the outlandish Jerry Lee Lewis. “It was a chaotic time, and I was partially destabilized by the enormity of what was happening to me. I think what helped me stay grounded was my family background and my Canadian upbringing.”

“I was old for my age as a teenager, which is why I was able to go to New York and meet Don Costa of ABC-Paramount Records and play him some of my songs – including Diana.” Paul has an innate aptitude for business, and he realized that he could do very well by writing songs for other performers. He wrote It Doesn’t Matter Anymore for Buddy Holly which became a hit shortly before the young rock ‘n’ roller perished in a plane crash. In 1962 Paul wrote The Longest Day, the theme song for what would become a classic WWII film by the same name -The Longest Day.

“When a door opens, you never know where it will take you in life. If I hadn’t hired Johnny when I was in England – I may not have connected with him back in New York.”

During the 60s British Invasion by bands like The Beatles and Rolling Stones, Paul Anka became one of the first popular singers to begin performing regularly in Las Vegas. Although much younger, Paul was befriended by Frank Sinatra, Dean Martin, and Sammy Davis Jr. – collectively known as The Rat Pack. He became a kind of junior member to the gang. “They all had a lot of mileage on them, and I could see the toll that their lifestyle was taking on them. I had worked hard to gain the success I had, and I didn’t want to lose it. I knew that I had to stay fit to be able to perform at my best, and I promised myself that I wasn’t going to follow that lifestyle.”

“None of us were born sophisticated.
We were just finding ourselves as we went along”
…Paul Anka commenting on The Rat Pack
“I had gained enough self-assurance that I didn’t need to be the smartest guy in the room. My objective was not to be an asshole.’
One piece said that he gets inside the personality of the people he’s writing for. Turns out it came naturally to him. “When I was a kid – I used to ‘borrow’ my Mom’s car and go over to Hull to do impressions in the clubs. To do that properly – you have to get into the character of the person, learn their voice patterns, etc.” This skill became very useful in his career of writing songs for other people.

Paul cites an example. “In 1968 Frank came to me and said that he was going to retire, and that he wanted me to write a kind of swan song for him. I had purchased the rights to the French song Comme D’habitude. I went up to my hotel room and started to work on My Way. I thought about how Frank would express himself. I’d never sing ‘I ate it up and spat it out…’ but that was the way Frank talked – so it was natural for me to put those words together for him.” Frank Sinatra recorded would become his signature song on December 30, 1968. It became a huge hit in the United States, Canada and even bigger in the United Kingdom.

Paul and I discussed Elvis Presley’s version of My Way. “I told Elvis that My Way wasn’t his kind of song. He liked to have those big Las Vegas finishes to his songs – he had such a powerful voice that he could pull them off.” Continuing about Elvis; “I really liked Elvis – he was a sweet guy. He was concerned about getting old and gaining weight. I told him that he could lose some weight with a better diet. But there was too much chaos in his life. I said that we should just go out – but he didn’t think he could.”

“Tom Jones came to me and asked for a song. I wrote She’s A Lady for him, and it went on to become his only #1 hit.”

There was a ten year period without top ten hits, although Paul continued to write and perform live shows. In 1974 he signed with United Artists and teamed up with Odia Coates to record the number one hit, (You’re) Having My Baby. The two would record three more hits; One Man Woman/One Woman Man (#7) I Don’t Like to Sleep Alone (#8), and the #15 duet (I Believe) There’s Nothing Stronger Than Our Love. Paul Anka was back at the top of the charts and there was a renewed demand for his talents as a performer and writer. 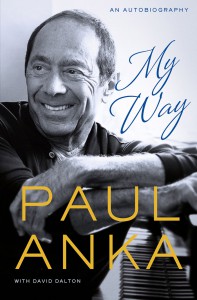 His autobiography My Way became the #1 Non-Fiction Best Seller

Even Michael Jackson came to Paul for songs. “I knew him and I also knew his family. I invited him to stay at my house and we worked on some songs together. He stayed for two weeks and we wrote and recorded together in 1983. But the songs were never released. The tapes also disappeared from the studio.” One of the songs, This Is It became a hit for Jackson in 2009. “I had to argue with the managers of his estate, but in the end we proved that I co-wrote that song.”

Throughout his career, Paul has kept himself current, and at the same time maintaining his identity as a writer and performer. He recorded Rock Swings in 2005, featuring songs by some of rock music’s greatest stars – but with a twist. “I recorded that album with my big band, and I adapted to songs to make them mine.” Rock Swings became a hit recording, reaching #2 on Billboard’s Top Jazz Albums, and sold over half a million copies.

He released a new album called Duets in the spring of 2013, featuring artists such as his late pal Frank Sinatra, Michael Jackson, Tom Jones and fellow Canadian Michael Bublé. At the same time, Paul published his autobiography, appropriately titled My Way. The book quickly went to #1 in the non-fiction category.
Paul performs with a high energy big band that is made up of many fine musicians. “It’s more than a large orchestra, – they are also my family on and off the stage. A lot of the guys have been with me for many years. I always travel with the full band; because I want my consumers – the people who attend my concerts – to have the same experience and be satisfied that they saw me and the band at our best. When the show starts, all that energy comes out – we are kickin’ ass when we get up there!”

“When I look back, I want to be remembered as a stand-up person. I was just doing what I felt had to do. It’s the moments and memories that matter most – all of the awards and all that other ‘stuff’ are nice mementos, but it’s my family, my children and the people that surround me that I care about the most.”

Paul Anka will perform at Place des Arts on September 29.
For tickets you can call the box office at 514-842-2112 or www.laplacedesarts.com