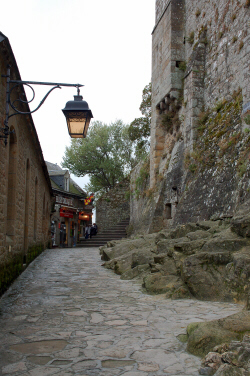 At the foot of the abbey, this peaceful lane follows the
contours of the mount.
Credit: Julie Kalan

“Mont Saint Michel is to France
what the Great Pyramid is to Egypt.”
– Victor Hugo, January 1884

Rising above the mystic fogs of the bay, Mont Saint Michel stands formidably against the dreary, grey sky. For a moment, I feel as if I have walked on to a movie set. I expect knights on horseback to come galloping into view with swords brandished after a cue of “action”.

However, even without armour-clad actors the scene is surreal.

The rocky, granite mount topped by a soaring abbey church resembles a pyramid but instead of desert sands, the mount is almost completely surrounded by muddy tidal flats.

Where northern France meets the English Channel, Mont Saint Michel resides in Normandy, just a stone’s throw from Brittany. As the tour bus drives along the causeway, Mont Saint Michel grows ever larger in my window frame. Looking down on the grassy banks of the road, I see the famous pré salé sheep.

A local speciality on many menus, these sheep that graze on the salt marsh vegetation are said to possess a unique flavour and tenderness. Stepping off the bus and walking to the Porte de l’Avancée entrance, I spot a few people carrying their shoes. 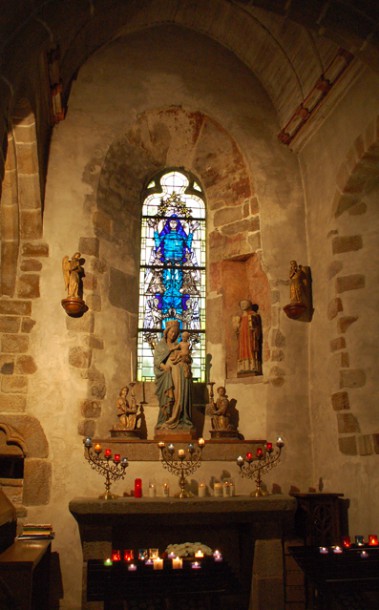 The chapel of the Virgin Mary, inside the small Saint Pierre parish church.
Credit: Julie Kalan

At first, this unusual sight puzzles me. Then I see their feet covered with thick, greyish mud. These adventurers have just walked along the mud flats.

From the mount’s main gate up to the abbey entrance, Grand Rue is narrow, crowded and lined with souvenir shops.

If not for the endless flow of visitors, I could stretch out my arms and in certain places practically touch both walls. Camera-toting tourists browsing postcard stands and buying tiny Mont Saint Michel ornaments are a modern day version of the medieval pilgrims that would navigate this same merchant-lined path in search of religious mementos to commemorate their journey of devotion.

The path travels quickly through the tiny town that is home to about 30 full time residents. Along the way nestled quietly on the left side of the path is the small parish church of Saint Pierre. A true sanctuary from the masses outside, tourists on their singular mission up the mount often overlook this church. 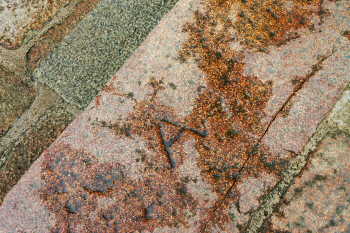 One of the many jobbers’ marks carved into the stones of the West Terrace. Credit: Julie Kalan

After climbing the 350 steps up the Grand Degré, the open plateau of the West Terrace is a welcome sight. From here you can see the expansive mudflats that are home to the highest tides in continental Europe. The difference between high and low tide can be 15m (49ft) and the tide is said to come in as swiftly as a galloping horse. Before the causeway was built in 1878, pilgrims had to face the perils of the tides and patches of quicksand that lurk in the mudflats. 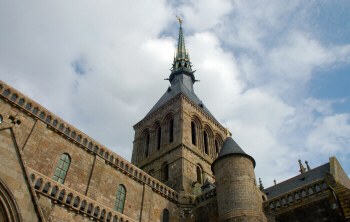 The abbey bell tower and spire are crowned with a statue of Saint Michael. Credit: Julie Kalan

Looking down at the stones beneath my feet, I notice that the terrace exhibits many stonemason jobbers’ marks. Theses marks (triangles, crosses, swirls, loops, etc…) identified each stonemason’s work, allowing them to be paid accordingly.

Moving my gaze up and craning my neck back, I see the gilded copper statue of St. Michael crowning the abbey spire, 168m (550 ft) above the bay.

If You Build It, They Will Come

Legend has it that in 708 the Archangel Michael told Bishop Aubert of Avranches to “build here and build high.” Drawing over 3 million visitors each year, the Benedictine Abbey that we see today was built between the 11th and 16th centuries. Reflecting the architectural styles of the time, the church is a blend of Romanesque and gothic designs. 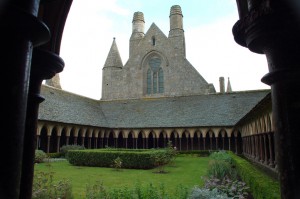 The interior is relatively unadorned but this absence of decoration conspires with the soaring columns, plain wooden benches and clear glass windows to draw your focus up.

This simple yet dramatic effect must have made quite an impression on the medieval pilgrims that risked their lives to reach Mont Saint Michel. Even more impressive is the skill and ingenuity of the builders who undertook the construction of a church 80m (262ft) long and 80m (262ft) above the bay, on the summit of a rocky mount that was only large enough to support a fraction of the structure. The solution was to create a larger platform by adding crypts around the summit of the mount. Even the cloister, a green oasis 77m (252ft) above the tides, rests atop the roof of a monastery building. Compared to the massive feats of imposing masonry that surround it, the cloister is small and welcoming. 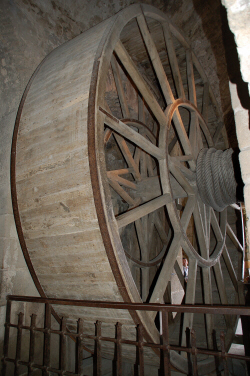 Believe It or Not

At dinner last night, an acquaintance who works in the tourism industry told me his favourite part of Mont Saint Michel was the human-sized hamster wheel. I laughed and gave him a “yeah, right” look; surely he was teasing me. He assured me that he was being sincere and would soon see it with my own eyes. Now here it is before me, in a small room adjacent to one of the crypts.

It turns out that this gigantic wooden wheel, a replica of the ones used to raise building supplies during construction, was installed when the abbey was being used as a prison in the early 1800’s. Unfortunately, these days trying the wheel is strictly off limits for both hamsters and humans.

For more than 130 years, the causeway has impeded the flow of tidal currents. Since 2005, work has been underway to restore Mont Saint Michel to its natural marine setting. In the coming years the causeway will be replaced with a new access bridge, allowing the sea to once again encircle the mount each high tide.

Mont Saint Michel is about 360km (225 miles) northeast of Paris. By car, the trip takes about four and a half-hours; traveling by train and bus (departing from the Paris Montparnasse station), takes just under four hours. Many tour companies also offer single and multi-day tours to Mont Saint Michel.

Air Transat has daily flights to Paris and Transat Holidays has a variety of pre-paid self guided tours. www.transatholidays.com