Looking for an itinerary that would be at least be 14 days long and stop at some ports that I had not visited before, I decided on the 16-day Iberia & Nordic shores on Oceania’s Insignia, sailing May 2nd from Barcelona to Copenhagen. Insignia has a total capacity of 656 guests.

Boarding the ship in Barcelona was easy and stress-free. No lines anywhere, check in took 5 minutes. The Insignia looked pristine and once on board, I found all the common areas as well as my cabin immaculate. This was so during the complete cruise. 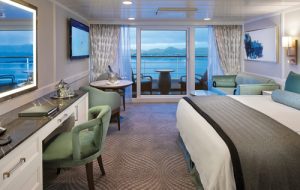 My balcony cabin was spacious, had a large cupboard and plenty of drawers. The teak-floored balcony was perfect for reading my book or to see the world go by.

Oceania prides itself for the best cuisine at sea, led by the Executive Culinary Director, Master Chef Jacques Pepin. The Grand Dining Room welcomes guests to a leisurely dining experience in a beautiful ambience. It is where I decided to dine the first evening on board. The menu changes daily, offers at least 10 appetizers, soups and salads and 10 dinner entrees, along with healthy options, gourmet vegetarian selections and an extensive array of plant based dishes. 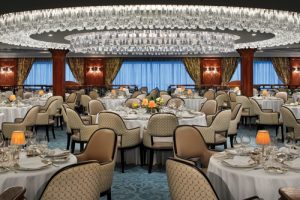 Every dish was freshly prepared and everything tasted fantastic. I mentioned to the waiter that my lobster bisque with Armagnac was outstanding and how great it would be to get the recipe. (At home I make Julia Childs recipe, she uses Cognac, I found this bisque to have a fuller and more complex flavor) A few minutes later the waiter came to the table together with Executive Chef Simon Hockley, really special to meet him. After getting permission “from the top” he graciously gave me the recipe. (You’ll find it later in this article.)

I also dined at the two specialty restaurants, both were at no extra charge, The Toscana, served their tempting Tuscan cuisine on custom designed china by Versace. Think octopus carpaccio, hand rolled gnocchi with pesto, followed by pan seared sea bass with lemon and capers. The Polo Grill offered the ultimate steak house experience; their steaks are 28-day dry aged. If meat was not tempting you could choose one of their succulent seafood dishes such as grilled swordfish and a whole Main lobster.

The Terrace café offered informal dining inside or alfresco on the stylish terrace at one of the shaded teak tables. The evening I ate there the menu featured lobster tails, chops, fresh fish prepared to order and a large variety of sushi and sashimi. During breakfast, the sun shines through the floor to ceiling windows. Ooh those croissants and the baguettes! 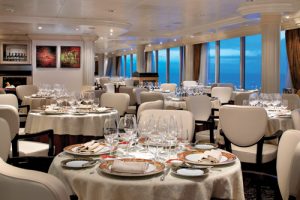 Everybody loves Italian! The lovely Toscana dining room is a perennial guest favourite

The Waves Grill – steps from the swimming pool, offered American favorites from lunch into late afternoon. The freshly grilled hamburgers are served with fresh salad, coleslaw and great crispy hand cut fries. Also available were sandwiches to order and some seafood.

At Baristas I could enjoy complimentary illy espresso, cappuccino, latte, macchiato or a cool and refreshing illy crema together with a little pastry and some finger sandwiches throughout the day.

On the third day my husband mentioned to me that this is what is must be like to be on a private yacht. Everyone called us by name, knew how we liked our coffee and made sure we had a table by the window. The service was just so personal, professional and courteous always. All the staff was fantastic.

Our 16 day cruise had the following stops:

Valencia, Spain: We opted to take the free shuttle bus offered by Oceania, into the town center. Map in hand we visited the Valencia cathedral, the Torres de Serrano, a beautiful Basilica built in the 14th century. Meandering through so many small streets we suddenly realized that we were totally lost. I asked a lady carrying her grocery basket for help. Since she only spoke Spanish, I showed her on the map where we needed to go. Motioning we should follow her, she graciously walked us all the way there.

Cartagena, Spain: The ship docked a short walk into town. There was a nice little park at the beginning of main street, after which we passed by the 1st century BC Roman Theater and the remains of the 13th century Cathedral of Santa Maria. The street was lined with many little outdoor restaurants and little shops, many featuring leather goods. Very tempting!

Many buildings were being repaired; others were already beautifully restored.

Gibraltar: we were docked just a few steps from town. We elected to join a ship’s excursion, “City under Siege” Our tour first took us to the vantage point where you could take a picture of Morocco across the channel, the distance only 8 kilometers. Then it was off to the base of the cable car base station for our 10 minute ride to the top of “The Rock”. The sky was blue, not a cloud to be seen, the views fabulous. Then we drove to the Great Siege Tunnels, dug out from solid limestone by the British during the great siege when France and Spain tried to recapture Gibraltar from the British. The tunnels were used as well during WWII.

Seville, Spain: We reached Seville by cruising 60 km from Cadiz on the Guadalquivir River early in the morning, luscious green fields everywhere, tall birds walking on the shore, small hamlets, so peaceful.

The town was celebrating spring festival – a week of serious dancing, eating, drinking and socializing. The locals parade around the fairground in carriages or on horseback, ladies wearing typical flamenco dresses, men in their light grey suits and hats. We were docked in Seville overnight, giving us the chance for an evening stroll through the quaint streets of the Santa Cruz quarter, followed by a tapas style dinner.

Portimao, Portugal: It was Sunday, everything was basically closed. We did enjoy a beautiful walk along the Riverfront, on a boulevard lined with Hotels, Condos, pubs (many English and Irish) and little souvenir stores.

Vigo, Spain: walking steps to the old town and then meandering through narrow short little streets and many squares, we ended up at the very tall sculpture “El Sireno” (the Merman). Perched high up on its pedestal, it represents the modern Vigo.

Brest, France: The local authorities offered us a free shuttle bus with 3 stops; the castle with the Navy museum, the downtown core and lastly, the Marina with its wide range of bars, cafes and restaurants.

St Malo: The major draws at this stop were visits to the mystical Mont St. Michel or to the picturesque village of Dinan. Since we had previously been at both places, we chose to visit the old walled city of St. Malo. It was largely destroyed during WWII but painstakingly reconstructed. We loved the stroll through the many small streets, lined with tiny shops and small bistros with sunny terraces.

Kristiansand, Norway:  On a beautiful sunny Sunday afternoon we sailed into this beautiful town. As we got off the ship, we found ourselves in a small marina, (the Fish Quai) where many families had moored their boats and were having a picnic on the shore, or eating lunch in one of the little restaurants facing the harbor. Very picturesque. We opted to explore Kristiansand on foot. Our walk brought us through “Posebyn” an area that is made up of the largest collection of old wooden houses in Northern Europe. On the way back, we passed by the imposing and architecturally unique Kilden Theatre for performing arts.

Oslo, Norway: Famous for its modern architecture, Oslo has the new Opera house with its unique “Iceberg” look and right behind it is the new Munch Museum, a silver tower looking like a Monolith. In the Vigeland Sculpture Park there are some 200 bronze statues. Really something to see. The city is mostly traffic free in the downtown area and we enjoyed walking everywhere. Norway is well known for its hand blown glass; I could not resist and bought a gorgeous champagne glass. I asked the sales lady where it was made, she said in the very north of Norway. I told her that I had just finished reading the book We Die Alone, the story of Jan Baalsruds fleeing the Nazis. She was pleasantly surprised that I had read about this amazing escape and yes, that is exactly where this glass comes from.

Copenhagen, Denmark: On a previous visit we had stayed here for 3 days, so we were familiar with this city. We had taken the canal cruise, seen the statue of beautiful Little Mermaid and visited Tivoli Gardens. On our short drive into town, from the ship, we were surprised by the amount number new construction. In the city center, many old buildings are being restored. We walked the length of the pedestrian street. 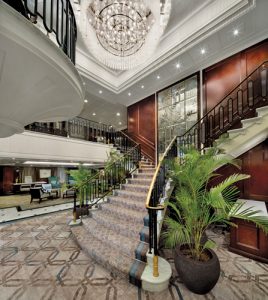 The Insignia décor is elegant and timeless

Lots to do on ship, both on the two days at sea and in port; these are some of fun things offered:

The gym was well set up for my husband and the daily classes given kept me in great shape.

At the OLife Enrichment series, Ann Pearson spoke about The Traveling Turtles and the story of one that travelled 10,000 km from Africa to Australia. Another lecture I attended was with Adam Tanner; Napoleon! Was France’s most famous man a hero or villain? I learned that about 200 of the guests were on ship for the “around the world” cruise. I subsequently met 3 couples from Quebec also doing the 180 days.

Plenty of room for sunning on the pool deck

The Insignia show band entertained us daily from 5pm on until 11pm with each night featuring a different theme; Dancing in Seville, a request night, smooth saxophone, Abba, etc. The dance floor was well used. The Panache String Quartet gave daily concerts in front of the main dining room from 7:45pm to 9:15pm. A few steps away in the Insignia Lounge we could enjoy a variety of nightly entertainment performed by musicians such as virtuoso flautist Andrea Amat, comedian and magician Mel Mellers and vocalists Cole Miller, Martin Kay and Julia Zepeda.

And just like that, our cruise came to an end. The ship offered complimentary Covid 19 Antigen testing the day before leaving. We were asked to disembark at 7 am. There were no public announcements made. No lines, our luggage was waiting for us at the dock. At 7:10am we were in the bus and soon on our way to the airport.

Colette Brown is a popular West End travel agent and can be reached at: 514-267-5556 or [email protected] or the website www.HOT.ca/Colette

Sauté the carrots, onions, celery, leeks and fennel (start by the hard vegetables) in oil and olive oil over medium heat for approximately 20 minutes (halfway through add the garlic).

Flambé with Armagnac, deglaze with white wine and reduce until almost dry.  Add the water and tarragon sprigs, and bring back to a simmer.  Reduce the heat and let it just slowly simmer for approximately 1 ½ hours.

Blend the soup as is (with fish bones and lobster shells) in a bowl blender until very smooth and then force it through a fine mesh sieve.

Bring the bisque back to a boil.  Add the heavy cream and let it simmer for 5 minutes.  Bind with roux until it reaches a velvety texture.  Season to taste with salt & pepper and lobster base, if needed.

Serve the bisque with whipped cream and chopped chives as garnish.