“I was always fascinated with the science and the biology of lymphoma,” said Dr. Nathalie Johnson, a clinician-scientist at the Lady Davis Institute of the Jewish General Hospital (JGH). “There’s a possibility of a cure, which is very rewarding. I tell my patients, ‘You have cancer, but you can get through this.’”

Lymphoma broadly refers to cancer that begins in cells of the lymphatic system. Dr. Johnson, an Associate Professor in the Department of Medicine at McGill, has a lab at the JGH that primarily researches aggressive lymphoma subtypes most commonly seen in teenagers and young adults. Her work aims to understand therapeutic resistance, the leading cause of death in these patients. The novel therapies she works on can be utterly life-changing.

“Multiple patients came to me and said, ‘I was told I’m going to die,’ Dr. Johnson said. “So we put them on a clinical trial in the clinical research unit. Lo and behold, they respond to these novel therapies, and they’re in remission.”

“The other side of the coin is that not everybody’s cured,” she continued. “And those patients are my inspiration to do research.”

Dr. Johnson’s work requires special equipment like the flow cytometer, which can measure several different features of individual cells and costs hundreds of thousands of dollars. Donors to the JGH Foundation have contributed towards funding her research and covered half of the cost of a flow cytometer; the federal government paid the other half. Dr. Johnson and her team use it to study lymphoma cells and understand how they die, or why they’re not dying, on a per-cell basis.

Dr. Johnson’s research has found that about 30% of lymphoma cells have rewired their cell death mechanism so that they are unable to die through conventional means. The phenomenon is not well-explained, but even if you give them chemotherapy, these cells persist. Dr. Johnson is on a mission to figure out why, and she credits the Foundation for supporting her research.

Biking from Montreal to Quebec City 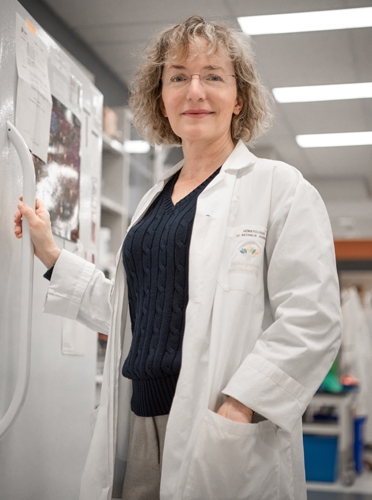 Dr. Johnson actively participates in fundraising events to support her work on lymphoma. For four years, she has joined the JGH Foundation’s annual biking event, initially the Ride to Conquer Cancer, then “Le Week-End”. Her team, Immune Force One, has included some of Dr. Johnson’s patients in remission and several of her family members, such as her husband and her 17-year-old daughter.

Her first experience of biking from Montreal to Quebec City inspired her.

“The first ride was amazing,” Dr. Johnson said. “I felt like Wonder Woman crossing that line. I was really afraid that I wasn’t going to finish it, but I did it!”

Since 2017, the Immune Force One team has raised over $300,000. The money raised through the Foundation has categorically changed the course of Dr. Johnson’s research. By raising money, her team was able to launch pilot projects. They subsequently secured $1.5 million in grant money because they had samples to demonstrate that they were able to complete their projects.

For Dr. Johnson, the greatest experience is watching her patients in remission finish the ride.

“Watching my patients cross that line, and then jump in my arms, it’s an outstanding feeling – it really is humbling,” Dr. Johnson said.

The JGH Foundation has been instrumental in helping her obtain the funds to set up a lymphoma tissue bank, which is not supported through grants or government funding. She is the Director of the lymphoma banking activities within the Banque de Cellules Leucémiques du Québec (BCLQ) at the JGH. The tissue bank has expanded to include not only tumour tissue but also normal immune cells from patients with lymphoma. Studying these samples could show us how to harness the power of the immune cells to fight cancer and thus provide more personalized medical treatments for patients.

“As a doctor, I think it’s truly amazing to witness patients respond to new therapies,” Dr. Johnson said. “To then study those patients’ cells and understand why there’s such a dramatic response is really fascinating.”

She loves what she does and appreciates how the JGH Foundation has supported her research.

“I think I’m very fortunate to be in this position where the JGH Foundation offers me the opportunity to raise funds and raise awareness,” said Dr. Johnson. “Supporting your hospital Foundation is a “win-win” situation. Everyone benefits: the hospital, the research, and most importantly, the patients.”