“If you notice my Face Book page, my posts are all by Aldo Caporuscio not Aldo Nova.” Even at the height of his career in 1982 with the release of his Self-Titled debut album which spawned hit-single rockers like Fantasy and Foolin’ Yourself, he retains that he never got caught up with all the hype. “I was a pretty simple guy. I took Montreal and my heritage with me. I’m still an Italian. I am who I am. The way I was in 1982 is the same way I am now in 2021. This is why friends I had 40 years ago from high school, I still hang out with now. My friendships never faded.”

In the early 80’s, Nova signed with music publishing giant ATV Music, which at one point was owned by Michael Jackson and had a catalogue of songs by music giants including The Beatles, before it was merged with Sony in 1995.

Soon after, Nova signed with the Columbia Records distributed label Portrait and released the gold-selling Aldo Nova. The album reached #8 on the Billboard 200 chart and made the handsome young rocker not only an instant star but a pioneer of the “pop metal” genre.

Two more albums ensued; 1983’s gold-selling Subject…Aldo Nova and 1985’s Twitch before Nova became disenchanted with record deal he signed at what he felt was too much of an impressionable age. “When you’re a young and evolving artist, your big dream is to get on a big label, to be out there in the public. So when someone (record labels) dangles that carrot in front of your face and says we’re going to put you on a big label and make you our priority, you’ll sign anything. You don’t think about getting a lawyer. Whereas now; I have a great law firm. I don’t do anything now without a (good) contract”.

Nova argues that he’s never been properly compensated financially until this very day, despite the success of his first couple of albums. “Even from the royalties of my first record which sold two or three million copies, I get peanuts. The record company makes a bunch (of money). Even though it’s the past 35 year period, you’re supposed to legally own your masters under American copy-write law. But they still refuse to give it (his master recordings) up.”

Nova’s trials and tribulations as a young rock star weren’t totally in vain. It’s the source of one of four musical projects that the always busy Nova is working on from his home studio just outside of Montreal. The Life And Times Of Eddie Gage, a two-and-half-hour rock opera, due out in the fall on vinyl and cd, is about Nova’s sojourn in the music industry. 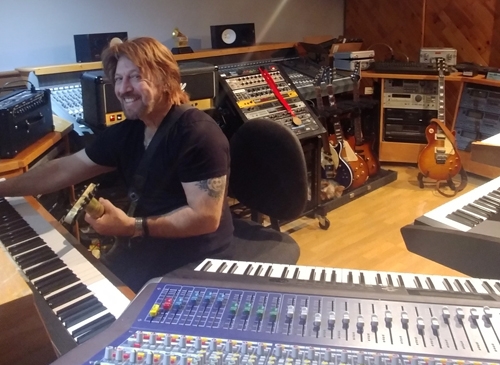 “I started working on it 13 years ago. It’s an autobiographical album. It starts out when I was 17 year-old and just getting into the business. It’s pretty much the story of my life, the good and the bad. The album is about good and evil, light and the dark. It’s about how somebody who is good can be manipulated into becoming dark. At least in the end, there’s some redemption when Eddie becomes (sees the) light again.”

Nova actually sings all the parts of the various characters in The Life And Times Of Eddie Gage, altering his vocals for all the different characters in the opera. He says; “The music is amazing, but the whole story is in the lyrics.”

Nova, who also plans to bring his rock opera to the stage eventually with his band which he describes as “kick-ass”, is also putting out a reworking of his past hits on a new project called Reloaded. He did something similar in 2019, but was not happy with results that he described as “over-produced and over thought.”

“Fans hated it, critics hated it. My wife said ‘it sucks’, he laughs. A song like Fantasy is supposed to be – excuse the expression – a balls against the wall rock song. It went too far out from what fans were used to hearing from me.”

“On this one (Reloaded) I went back to the basics. I didn’t stray too far from the originals. I just made them more exciting.”

Nova is also producing a record of instrumentals of his catalogue. “What I’m doing on disc 2 of Reloaded are versions of my songs without the lead vocals and you can do Karaoke with me backing you up. There will also be versions of the songs without lead guitar so guitar players will get to play along. If guitarists want to figure out how I play they can watch the You Tube videos to get a private lesson. It’s radical. No one’s ever done that. People (artists) are too proprietary. Record labels are too greedy to let you do something like that. I’m giving back to my fans.”

The Karaoke and guitar-less disc will be part of a double disc set on Reloaded also to be released in the fall.

Family has also always been an important part of Nova’s life. He began playing guitar at 14. His mother was tragically killed when she was hit by a car. “To drown out the blues, I asked my brother to buy me a guitar. So he bought me a guitar at a shop on St. Denis Street. I stayed in my room for about two years; practicing and only coming out to go to school and eat my meals at the table. I was playing a lot of Hendrix. The first song I learned to play was either The Peter Gunn Theme or (Chicago’s) 25 Or 6 To 4 because you can play it on one string”, he laughed.

Nova was a fan of top 40 radio; listening to the late Ralph Lockwood on CKGM, taking everything in from The Supremes to Chicago.

He says he never dreamed of getting a record deal at the time. “I had a job at a music store during the day selling equipment and fixing guitars. At night I played Top 40 music in clubs. At the end of my club gigs at three in the morning I would go record demos in a recording studio in Old Montreal. Someone had given me studio time and I took advantage of it.”

After he was signed by Portrait in ’82 and released hit debut set, he began touring as an opening act for Sammy Hagar and Blue Oyster Cult.

After his deal with Portrait soured he stayed quiet for awhile until he began working with an old friend he met back in ’82 when he was mixing his first album.

“I was mixing my first album at The Power Station (famed New York City recording studio) with his cousin Tony Bon Jovi. He (Jon) was sitting by the coffee machine. He used to sweep the floors and make coffee. He was just basically a gopher. He was hearing my stuff. He looked like a good kid so I said do you want to come in and listen to some stuff? I played him Fantasy. The mixes were incredible because his cousin Tony was a genius. It became a friendship that lasted until 2006.”

Nova would co-write Blaze Of Glory, Jon Bon Jovi’s 1990 smash chart-topper from the 20th Century western feature Young Guns II. It was also featured on Jon’s debut solo album of the same name. “Most of that record was pretty much arranged by me and all I got was a thank you. That’s why in 2008 I stopped working with everybody, Celine (Dion), Bon Jovi.”

Nova worked extensively with Celine Dion early in her career. “I produced three songs on her 1987 album “Incognito”. Then when it came time for her to sing at the Junos, they used one of my songs called Have A Heart.

When asked about the Grammy Award he received as a producer for Celine’s 1996 album Falling Into You which sold in excess of 30 million copies world-wide, he joked “Could you tell that to my bank account” before letting out a roaring laugh! “It was good for Celine Dion’s bank manager. It wasn’t good for mine!’

Nova would also write songs for Blue Oyster Cult, whom he opened for at the beginning of his career as well as one-time American Idol contestant Clay Aiken.

Nova’s comeback album in 1991 after leaving Portrait Records and being inactive on the recording front was on Jon Bon Jovi’s own label Jambco Records. Bon Jovi would co-write the record as well. Blood On The Bricks (1991) was basically a Jon Bon Jovi record sung by Aldo Nova. Some great songs came out of it, including the title track, Modern World and Someday. “They were basically demos of mine that Jon changed a few words here and there on. My fans didn’t like it. It sounded too much like a Jon Bon Jovi record.”

While Nova’s appreciative of his international success, especially of his success in the States, he still sounds a bit resentful about the lack of attention he’s received at home. “I was born in Quebec, raised in Quebec. I live here. I speak Quebecois like a perfect Quebecois yet Quebec radio and Canadian radio don’t play my stuff. I find that frustrating but then again it doesn’t matter. That’s just the way it is, you know”!

Well, whoever he is; Aldo Nova, Aldo Caporuscio or Eddie Gage, anyone working on three albums at the same time as well as a two and half hour rock opera is not someone you can count out yet!