Lara Melda was the winner of BBC Young Musician 2010, and has won exceptional praise for her Chopin interpretations. Today’s BBC Radio 3 program pairs the composer’s final and most taxing sonata with two ‘study pictures’ by Rachmaninov from his Opus 33. 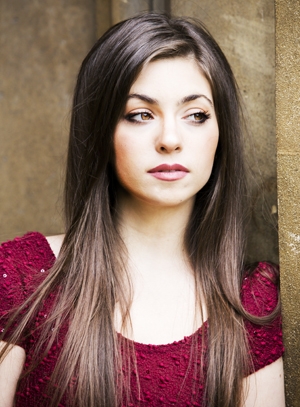 Lara made her BBC Proms and Royal Albert Hall debut this summer as one of the soloists performing with the BBC Concert Orchestra conducted by Andrew Gourlay in an evening devoted to previous Young Musician winners. Other concerto performances have included Britten’s Young Apollo with the Britten Sinfonia conducted by Paul Daniel (Barbican), Rachmaninov’s 2nd Piano Concerto with the Royal Northern Sinfonia and Kirill Karabits (The Sage), Mozart K466 and K242 with the Aurora Orchestra and Nicholas Collon (Kings Place), the Grieg Concerto with English Sinfonia (St John’s Smith Square) and Beethoven 3 in a tour of New Zealand with the National Youth Orchestra of New Zealand. Amongst many venues over the UK and abroad she has played recitals at the Laeiszhalle (Hamburg), Les Sommets Musicaux in Gstaad (Switzerland), Mecklenburg-Vorpommern Festival (Germany) and Cadogan Hall (London). Lara made her Wigmore Hall recital debut in 2017, and followed this with three more sold out recitals there in January, December 2018 and November 2019. During the COVID pandemic Lara continued giving concerts on online platforms including recitals for many music clubs around the world and also a performance of Mozart’s K595 with the Northern Chamber Orchestra.

Lara Melda performs regularly in Turkey and made her debut at the International Music Festival in Istanbul in June 2011, playing the Grieg Concerto with the Borusan Philharmonic. She has also been presented by the ‘Istanbul Recitals’ piano series and performed at the Antalya Piano Festival, Bogazici University and Zorlu Center. In 2012 she received the prestigious ‘Promising Young Artist’ award from Kadir Has University and in 2015 was voted the ‘Woman of the Year Arts Award’ by Elele-Avon and the Turkish public. Lara returned to Turkey in May 2019 to perform Schumann’s Piano Concerto with the Cumhurbaşkanlığı Senfoni Orkestrası in Ankara.

In the summer of 2016 Lara graduated from the Royal College of Music with a first class honours degree, where she studied with Ian Jones. She had begun piano lessons with Emily Jeffrey at the age of six and since 2017 continues working closely with Alfred Brendel. Most recently Lara was invited as a guest on BBC TV’s Proms Extra program and in 2020 she released her debut Chopin CD.