The Montreal Museum of Fine Arts (MMFA) is presenting, for the first time, remarkable Books of Hours conserved in seven Quebec collections. The result of extensive research, the exhibition Resplendent Illuminations is a unique opportunity to admire some fifty works
primarily from illuminated manuscripts –in this priceless legacy of the Middle Ages and the Renaissance in Europe.

Books of Hours were works of private devotion that first appeared in the thirteenth century. They were the most popular prayer books made for the laity and were used as primers for learning to read. Often given as wedding gifts, they were “bestsellers” until the sixteenth century. Over time, they evolved in a variety of ways both textually and iconographically, adapting to the regional differences in devotions, languages and artistic styles of European Christianity.

The 59 artefacts presented here for the first time belong to the Montreal Museum of Fine Arts, McGill University, the arts library of the Université du Québec à Montréal, the Séminaire de Saint-Sulpice, the Archives of the Jesuits in Canada, to Concordia University and the Musée de l’Amérique francophone in Quebec City. 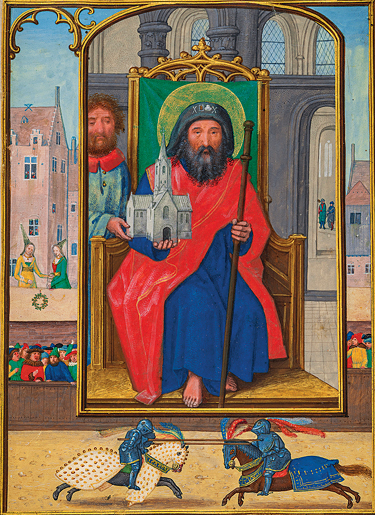 Three curators present new findings
“My hope is that the public can appreciate the singular beauty of these artefacts, which come from across medieval and Renaissance Europe and enrich our collective heritage. Perhaps they will be spurred to delve deeper into the past by leafing through the new Catalogue raisonné des livres d’Heures conservés au Québec,” said Brenda Dunn-Lardeau, associate professor, department of literary studies, UQAM, who edited the scholarly work.

“One of the remarkable aspects of this exhibition is that we have assembled entirely from publicly accessible collections in Quebec such a breathtaking range of Books of Hours, some independent leaves but most of them still bound, with exquisitely beautiful illuminations. These works bring vividly to life both the evolving internal religious experiences and their outward expressions over the course of four centuries. Our evocative installation is intended to permit the visitor to appreciate each work intimately,” added Hilliard T. Goldfarb, Senior Curator –Collections, and Curator of Old Masters, MMFA.

“The most surprising discovery in this exhibition is how many Books of Hours have been in Quebec for more than two hundred years. Unlike most collections of Books of Hours in North America, which have been assembled in the late 19th and 20th centuries, here there are books that are truly part of Quebec’s religious and cultural heritage. The other remarkable feature of this exhibition is the successful identification of artists and schools that link these manuscripts to others held around the world,” concluded Richard Virr, chief curator (retired), Rare Books and Special Collections, McGill University.

Priceless treasures from the Middle Ages to the Renaissance
The works on display show the exquisite elegance of some Gothic and Renaissance illuminations from France, the Southern Netherlands, Italy and Southern Germany, as well as other contemporaneous expressions of popular piety. These small images, carved into wood or hastily painted, were probably produced for clients of more modest means and feature decorations similar to decorative folk art. Seven
books come from the early days of printing, an innovation that made it possible to reach a much wider readership than did manuscripts. These books illustrate the development of woodcuts and metal cuts that gradually replaced the art of illumination.