The story behind Terry’s tribute to his mentor, Duncan Macpherson

Duncan Macpherson was the editorial cartoonist with The Toronto Star from 1958 to 1993. His thirty-five year run at Canada’s largest newspaper began at the time that author Terry Mosher describes as; “a time when newspapers were the king. They were bold, they were full of bluster.” Macpherson was the #1 cartoonist at Canada’s #1 newspaper in terms of circulation. He won six National Newspaper Awards and was awarded The Order of Canada. During our conversation, Montreal Gazette cartoonist Terry Mosher (known to Montrealers as Aislin) told me that Duncan Macpherson crisscrossed Canada during four successive summers and published a hardcover book of his drawings and paintings, titled Macpherson’s Canada.

“I learned a lot about how to deal with editors from Duncan Macpherson – but there was more to it than that. I already had great respect for Duncan as a fellow cartoonist. He was terrific at the mechanical aspect of our craft. He could draw really well. But he also held the belief that we could critical without being viscous or base.” Terry continues; “I have this tremendous debt to Duncan… Most of what I have achieved goes back to advice that Duncan gave me in the late 70s.”

With that statement, Terry and I settled into his comfortable back garden on a sunny July afternoon and he shared the story behind his decision to chronicle The Life and Art of Duncan Macpherson.

“I was doing really well in Montreal in the mid-to-late 70s. I’d previously met Duncan when we were courtroom sketch artists during the 1971 FLQ trials after the 1970 October crisis. Montreal was a hot source of news the 70s. We had the FLQ, the Parti Quebecois, the 1976 Olympics and all the intrigue and political scandals that came along with these events. There was a lot going on in Montreal and my cartoons were being picked up all over the world.”

“I was spending one day a month in New York, TIME Magazine was buying my work – I had twenty cartoons in one issue! Mordecai Richler was urging me to move to New York. Based on my notoriety down there – it seemed like a good thing to do.”

“I talked to Duncan about it, and he said; ‘Don’t go! You’ve got all this stuff going on in Montreal. Stay there! If you go to New York you’ll just be another illustrator.” Terry continues, “I’d seen stacks of cartoons and illustrations in magazine offices down there – so I understood that Duncan knew what he was talking about.”

Duncan’s advice didn’t stop there. He counseled Terry on how to improve his situation at The Gazette. “Before he gave me advice on what to do next, he asked; ‘Terry, do you have confidence in yourself? Do you believe that you could make a living somewhere else – if need be?’ My answer was ‘yes’.  He said that I should go in and quit, and then tell them what I wanted. Duncan’s advice included several key items; including that I work as an outside contractor and that I retain ownership of my original drawings. So I did just that. When I went in to meet then publisher Mark Farrell with the news that I was quitting, he said; ‘I see that you’ve been talking to Duncan Macpherson. Can I get back to you in a day or two?’

“It all worked out and I came back to The Gazette on my terms. It was the best advice I’ve ever had in my life – and I owe it all to Duncan Macpherson. And it all began with ‘Don’t go to New York!’ I’ve had an interesting life and I don’t believe that it would have turned out this well without Duncan’s advice.”

“So Peter, you can see why I owed this tremendous debt to Duncan Macpherson.”

About three years ago, I met Terry on McGill College, and he mentioned that he had taken on a writing project – a departure from his immensely popular collections of his political cartoons. Now, three years later Terry picks up on the brief conversation.

“There were three key elements as to how this book came about. The first was a lunch meeting in Toronto with then Toronto Star Publisher John Honderich and Ian Macpherson, Duncan’s son. “We were talking about Duncan, and I remarked that there really wasn’t a decent book about Duncan and the breadth of his life and work. They both looked at me and simultaneously said; ‘Why don’t you do it?’ My quick response was; ‘There’s all kinds of people who could do it better than me.’ And then I added… ‘But they’re all dead!’  We all had a good laugh – but it was true. It looked like it would be up to me.”

“The second key moment occurred when I went to Lucinda Chodan at The Gazette and told her that I was seriously considering this book project. Her immediate response was; ‘Go ahead Terry; we’ll give you the support you need when it’s completed’.

“The third key element came in a meeting with Anna Porter at Key Porter Books in Toronto. She said; ‘Terry, you don’t want to be spending a lot of time here in Toronto on this book, why don’t you contact McGill-Queens University Press in Montreal?’ Anna introduced me to Philip Cercone and I told him what I wanted to do with the book, which includes marketing a hard cover version to libraries and art schools across Canada. We had a deal in five minutes!”

Ian Macpherson loaned Terry his father’s 350-page journal. “Duncan’s journal provided a framework for me to write the book. Parts of it were rambling commentaries, but there were a lot of gold nuggets in there too.”

Terry Mosher’s resulting book is a treasure trove of political cartoons and a remarkable history of one of Canada’s leading cartoonists – warts and all. You’ll also see examples of Macpherson’s brilliant paintings. Terry’s talent and solid reputation enable him to get an audience with politicians and media executives that would not be available to most writers. When it’s ‘Aislin on the line’, they take his call. The result is that Professional Heckler combines the scholarly elements that you’d expect from McGill-Queens University Pres s book, with the salty inside scoops you’d pick up at the Press Club bar in days (and nights!) gone by.

Professional Heckler: The Life and Art of Duncan Macpherson, published by McGill-Queens University Press is available in bookstores. 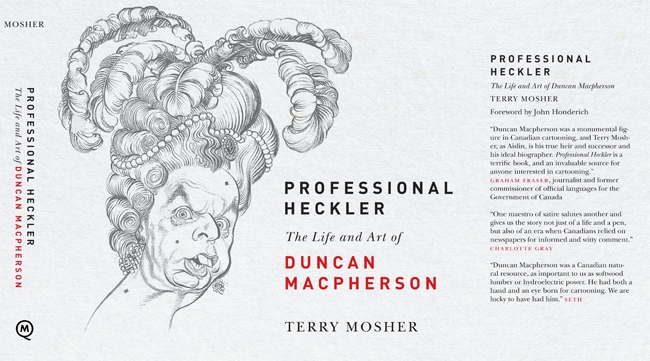 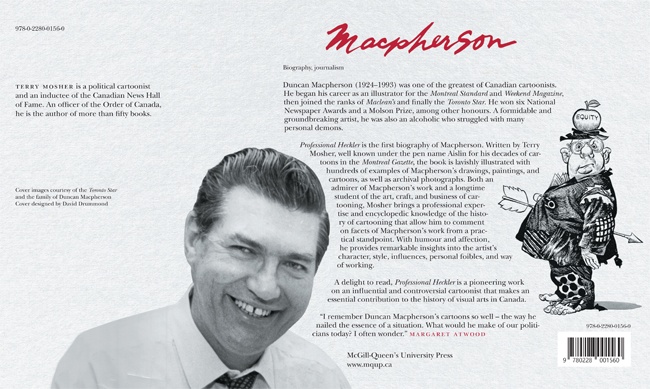