In 1962, a young couple living in Montreal went on a quest for a more peaceful and tranquil environment outside city limits, and took a drive to a small community which was then at the “far western tip” of the island. It would eventually be known as “Westpark” and become one of the busiest west island suburbs, and where my parents had their first home built in Roger Pilon’s housing development in time to welcome a new member to their family the following year. The passing of time as fleeting as it is, and as much as they thrived and loved their home and their life in Quebec, 38 years later found themselves making a decision based on the same criteria except that the “noise” was no longer the sound of traffic, but rather an incessant chatter of a political kind they now found too loud to ignore. And so, once again, they went in search of the peace and tranquility they craved.

Another leisurely drive westbound, this time headed toward the 401 and just over the “border” for a bit of giftware shopping and a relaxing lunch in the quaint village of Lancaster, Ontario. On their way back along the eastbound service road, they veered off-track into parts unknown, and discovered a unique residential marina community in Bainsville called “Creg Quay”. Only 5 kms outside of Quebec, this little country cluster of about 100 homes is situated on the shores of Lake St. Francis and to their surprise, found it to be a most charming lake-side community unto itself with an activity centre, community gardens, heated pool and tennis courts. There was a playground for the grandkids, walking paths throughout, tidy well-groomed properties and lush gardens, a private beach, and boating water access for home-owners. For active folks, sports galore from cross country skiing to golf (10 golf courses in the immediate area).

Neighboring communities of Cornwall, Alexandria, Vankleek Hill and Hawkesbury offered a full range of the services: theatre, shopping, movies, restaurants, excellent medical care facilities and a nearby bridge to New York State. Many of the working residents commuted the short distances to Montreal, Cornwall and Ottawa. The Creg Quay development dates back to the early 1980’s as the dream and passion of Mr. Bob Simmons. What began as housing lots leased to homeowners, was converted to a homeowner housing community in the mid-80’s. What a great find not far from their family and friends in nearby Quebec, but in a country community where the living was easy and where they lived the good life in the house they built in 2000.

Today, that charming house and property which provided my mother and late father with so many fond and lasting memories, friendships and of course, their sought-after serene quality of life, now seeks a new family to carry on the tradition. Perhaps it’s your turn to go west.

Creg Quay www.cregquay.com, is located just across the Ontario border on the shore of Lake St. Francis.
Exit 4th Line Road from the 401 and follow the signs.
Re/max Supreme Broker of Record John Clouston specializes in this and other eastern Ontario communities such as Alexandria, Lancaster, and Vankleek Hill.
Tel. 613-872-1110.  www.johnclouston.com 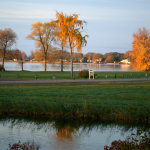 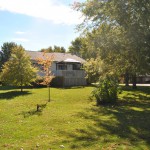 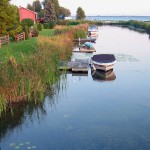