Starting May 16 at 8 pm, Unis TV will broadcast Mix sonore, a new musical gathering hosted by Martha Wainwright. After singing on her balcony, the internationally renowned singer-songwriter will be singing on the small screen, hosting a TV program for the very first time in her career. She will share the stage with guest artists including David Myles, Louis-Jean Cormier, Classified, Bobby Bazini, Les soeurs Boulay and Fanny Bloom. Francophone and Anglophone singer-songwriters from all across the country and from different musical backgrounds will get to know each other through their songs. 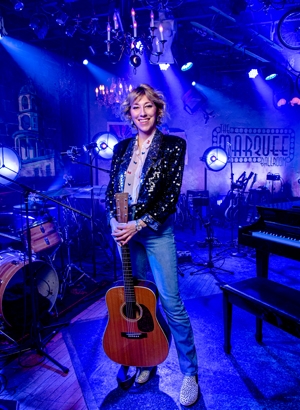 Electrifying musical performances and first-time duets are on the lineup for this series shot at the legendary Marquee bar in Halifax last January. In front of a live audience, the artists will sing classic tunes, covers of songs that influenced them or their own hits. Produced by Connections productions and directed by Marcel Gallant, the thirteen 48-minute episodes will be available on the channel’s website and through apps for smartphones, tablets and connected TVs.

Unis TV is included in basic cable packages throughout Canada. The channel builds a bridge between Canada’s various French-speaking communities and showcases the richness and diversity of Francophone Canada.