The Montreal Museum of Fine Arts (MMFA) presents the first Canadian retrospective of Alexander Calder (1898-1976), showcasing the full scope of the career of the American who set art in motion. The fruit of in-depth research, this major exhibition sheds new light on Calder’s work, as seen through the perspective of innovation.

Developed, organized and circulated by the MMFA, the exhibition Alexander Calder: Radical Inventor brings together over 150 works (paintings, sculptures, jewellery and other graphic works) to give the public an appreciation of the true extent of Calder’s extraordinarily innovative multidisciplinary practice: from his wire portraits to his paintings, and from his invention of the mobile to his monumental sculptures. Over the course of an international career that spanned half a century, this artist exhibited on five continents and worked in an astonishing array of fields, including drawing, sculpture, painting, design and performance. 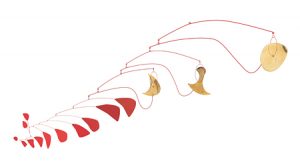 Loans from prestigious institutions
Among the 150 objects on display are numerous works and documents that have rarely or never been presented and have been specially restored for the exhibition: the sculptures The Brass Family (1929), on loan from the Whitney Museum of American Art; Kiki de Montparnasse (II) (1930), on loan from the Centre Pompidou, Paris; White Panel (1936), on loan from the Calder Foundation; and the mobile Red Gongs (1950), on loan from the Metropolitan Museum of Art, New York, to name but a few. Alexander Calder: Radical Inventor also reveals little-known sculptures made by the artist in his childhood.

Nathalie Bondil, Director General and Chief Curator, MMFA, explains: “Montreal is home to the most important work of public art in Canada: the monumental sculpture Trois disques, or as Montrealers affectionately call it, Man, remembering ‘Man and His World.’ Evoking humanism as did Expo 67 – an exhibition that looked toward the future – this sculpture alludes to humanity’s technical progress and efforts, and its aspiration toward a collective harmony. And yet, the life and work of this modern art giant remain underappreciated in Canada. That is why I initiated this retrospective. As Sartre wrote, ‘These movements that intend only to please, to enchant our eyes, have nonetheless a profound and, as it were, metaphysical meaning.’ Calder moved in the cosmopolitan modernist avant-garde circles with figures such as Arp,Cocteau, Le Corbusier, Léger, Miró, Mondrian, Man Ray, Prévert and many others. His art, joyful and serious at the same time, attracted crowds from the very start of his career in the Paris of the Roaring Twenties, with his miniature circus. Today, in Montreal, world capital of the circus arts, Calder’s talents as a storyteller, inventor, painter and sculptor are revealed, thanks to this fresh perspective and research done by the curators, with the support of the Calder Foundation.” 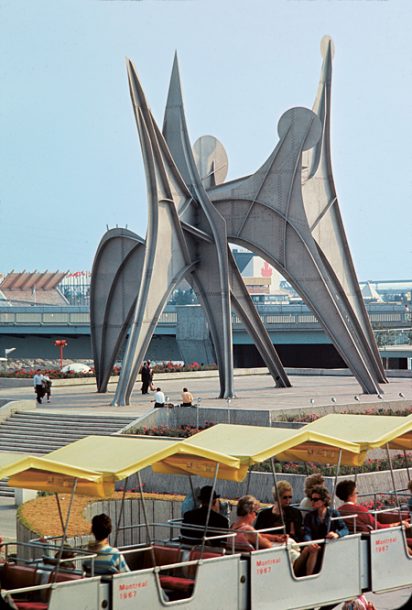 Montreal, a Calder city
The last section of the exhibition is devoted to the sculpture Trois disques, commonly called Calder’s Man, a monumental work that has become an icon of Canadian heritage. This 22-metre stainless steel stabile installed on the Île Sainte-Hélène belvedere in Parc Jean-Drapeau (currently under reconstruction), is Calder’s second-tallest stabile, after that in Mexico. It was commissioned for Montreal’s Expo 67 and was gifted to the city at the end of the exhibition. This is the first time that the two original maquettes of the work have been brought together in the same location – one of them being the maquette that is installed front of the Michal and Renata Hornstein Pavilion, on loan from York University, in Toronto, which was recently restored. This retrospective will give the public a chance to discover the artist behind this masterpiece of public art.

Alexander Calder: Radical Inventor
The exhibition presents an original reading of the uniqueness of the artist’s work and contribution to art history. A radical inventor, Calder not only introduced a new dimension to sculpture but changed the way we experience art in the modern world, based on a series of novel concepts. Beyond the actual objects on display, the exhibition draws attention to the space they occupy.

Elizabeth Hutton Turner, Guest Curator and co-curator of the exhibition, explains of Calder’s incredibly innovative work: “A true radical inventor, Calder showed us that something else was entirely possible in Art. That Art could be something more than earth bound. Travelling with Calder, following the physics of Calder’s creative process, experiencing the alternate perspective of Calder’s work, one arrives filled with elation and sense of boundless possibilities for poetry and beauty.”

Anne Grace, co-curator of the exhibition, adds: “Visitors to the exhibition will be astonished by the breadth and innovation of his practice. Calder’s kinetic art reflected the increasing pace of the modern, industrial world of the 20th century; today we may consider his art as an invitation to slow down and enjoy a unique experience. No doubt visitors will be wonder-struck by the sheer ingenuity and beauty of Calder’s sculptures displayed at the museum.” 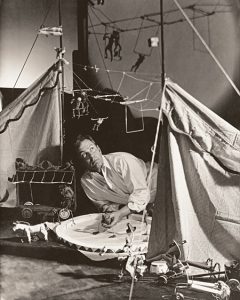 Biographical note: Alexander Calder
Calder was born into a family of artists, and his probing mind, love of materials and penchant for invention equipped him from his early career to discard the conventional parameters of art. During the 1920s in Paris, Alexander Calder developed his art among the artistic and intellectual circles of the day, forging friendships with Cocteau, Duchamp, Le Corbusier, Léger, Mondrian, Miró, Prévert, Varèse and other prominent figures of the international avant-garde. Around this time, he presented a miniature circus, which is today considered a precursor of performance art, and invented wire sculpture, tracing the silhouette of his subjects, including acrobats and well-known personalities like Kiki de Montparnasse and Josephine Baker. He was a protean creator whose practice continues to amaze us for both for the diversity and the unique experiences his works offer.

Calder revolutionized the art world by adding the dimensions of movement and time to sculpture. In so doing, he created a new way for art to be experienced in the modern world, which itself was in a state of flux in an era of rapid industrialization and great social change. It was in the early 1930s that he invented what Marcel Duchamp termed “mobiles,” to describe the kinetic sculptures in which the various components in precarious equilibrium generate a unique series of movements, transforming the way in which objects can animate space. At the same time, he created immobile abstract works, which Jean Arp, in 1932, labelled “stabiles.” Later, global commissions for Calder’s distinctive monumental stabiles earned him international renown, and he progressively redefined the urban space through his public art. 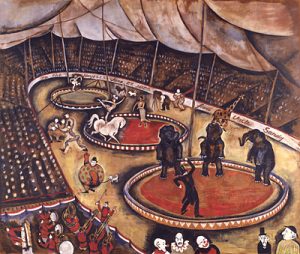 Momentum: the public activation of 10 mobiles
A rare opportunity to see Calder’s mobiles in action, the Momentum presentations will allow visitors to observe the works being set in motion by a MMFA restorer. These activations of the mobiles offer a truer representation of the artist’s vision for these kinetic works. These events promise a unique experience and are held Tuesdays through Sundays at 2 p.m.

Around the exhibition:
unforgettable events and experiences
Given that the interaction between object and viewer is essential to experiencing Calder’s work, visitors will be treated to a presentation at the entrance to the exhibition, which is the fruit of a creative collaboration between Cirque du Soleil and the MMFA, in tribute to Calder. Using a turntable placed under the impressive mobile Red Lily Pads (1956) – an exceptional loan from the Solomon R. Guggenheim Museum – visitors will observe the work revolving in slow motion.