The food was terrific, the service – excellent, but most of all we had a lot of fun on this cruise 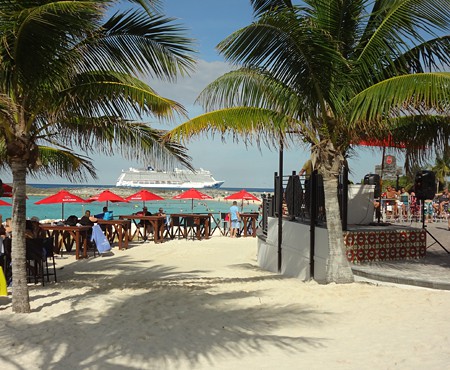 One of several beach bars on Great Stirrup Cay

We’ve been fortunate to enjoy sailing with a lot of the major cruise lines; but never have we had the kind of genuine welcome from an entire crew as we experienced onboard the Norwegian Escape, Norwegian Cruise Lines’ newest ship until the company launches Norwegian  Bliss this coming spring. On returning from an excursion one day during our seven-day Western Caribbean cruise, the one hundred people on our tour were greeted by a gauntlet of officers and crew – all clapping and singing as we returned to the ship. Sure it was choreographed – but it was well done and more importantly, someone came up with the idea and management approved it. From the moment we stepped onboard, we experienced what a guest-centered cruise could be like. 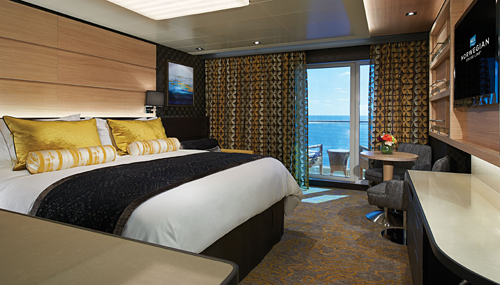 An elegant and spacious aft-facing balcony stateroom in
The Haven

Norwegian Escape is the third in the Breakaway series of NCL ships, and each time the designers have made some improvements. For people who enjoy the company’s ship-within-a-ship exclusive accommodations in The Haven, you’ll be pleased to know that the private pool and sundeck in The Haven now has a retractable roof. The Haven combines the best of both worlds, where guests have exclusive use of a private pool, sundeck, private dining room, and a lounge and bar; in addition to all other areas of the ship, from the fitness centre to the spa, jogging track, and the always –popular water park. Said Captain Giovanni Cutugno; “The Haven accommodations are always the first to sell out. It’s proven to be immensely popular with our clientele.” 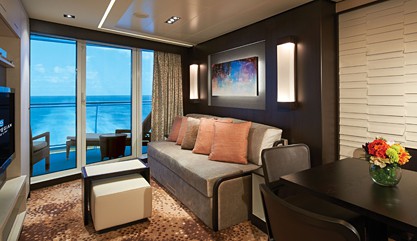 The Escape is has a capacity for 4,226 guests, 1,700 staff and crew from 71 countries. It’s a floating United Nations. It’s a compliment to Captain, Hotel Director Deepak Punia and the staff and crew that The Escape has the highest guest satisfaction rating of all the ships in the Norwegian fleet.

Sailing from Miami, our seven night itinerary included a restful day at sea, a day in Falmouth, Jamaica; the ever-popular Grand Cayman and its Seven Mile Beach; Cozumel; another day at sea followed by a full day at Norwegian’s Private Island in the Bahamas before returning to Miami.

All the ships in the NCL fleet have dramatic and colourful art on the ship’s hull. Renowned Key West aquatic artist Guy Harvey was commissioned to paint the hull of The Escape. 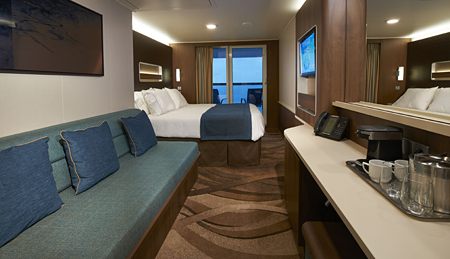 Let’s begin with your stateroom, your home-away-from-home. Each is well appointed and decorated as you’d expect in any first class hotel room; except this hotel is floating. All staterooms are well-equipped with a coffee maker, flat screen TVs, a mini-bar fridge, and in our case, a balcony. There is ample cupboard and drawer space. One of our favorite ways to start a cruise day is to order room-service breakfast and sit out in the morning sun, listening to the sound of the water swishing past the ship’s hull. Your steward makes up your cabin in the morning and refreshes it while you’re out for dinner in the evening. There are adjoining cabins and suites that are ideal for families. Norwegian Escape and its sister ships in the Breakaway-class also have Studio cabins for solo travelers. 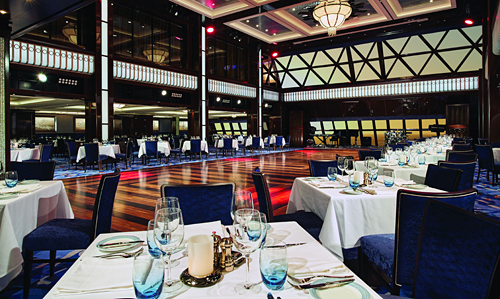 The Escape has an extensive choice of dining options; the complimentary choices beginning on Deck 16 with the Garden Cafe Buffet. With well-defined food stations, booth seating, and friendly sections, the Garden Cafe brings buffet dining to a whole new level. No more cafeteria-like seating. O’Sheehan’s bar & Grill serve pub fare is located on Deck 7 overlooking The Atrium, is immensely popular. The elegant Manhattan Room with its ceiling soaring two decks above the dance floor and bandstand is The Escape’s main dining room where memories are made of family vacations, special celebrations or just simply a couple enjoying each other’s company. The twin dining rooms Taste and Savour have a similar decor in a more intimate setting.

Eight additional restaurants have a modest additional flat-rate charge or A-la-Carte pricing. The latter takes into account that you’ve already paid for all meals, and the additional charges are modest compared to a similar restaurant at home. For example, in Cagney Steakhouse, a Surf n Turf main course is just $28 – you’ll pay twice that and more at a good four or five star restaurant in town. 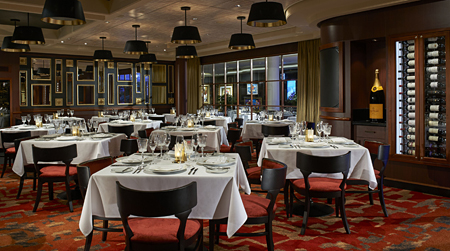 Le Bistro is a favourite of many returning NCL guests

One of our favourite restaurants on all NCL ships is Le Bistro, serving Continental and French cuisine with panache and grace. Le Bistro on Norwegian Escape upholds the high standards that we have enjoyed in other Bistro dining rooms on other NCL ships. Your main course arrives under silver serving covers and they are simultaneously removed with a continental flourish. Cagney’s is based on an all-American steakhouse decor and menu. Our dinner there was quite simply – spectacular! The cruise line’s best waiters, sommeliers and chefs all want to work in Cagney’s. The steaks, rack of lamb, and seafood are first-rate. I enjoyed a tender and perfectly cooked Filet Mignon, and Beverley’s sea bass was excellent. A significant aspect of dining in Cagney’s is the outstanding service. 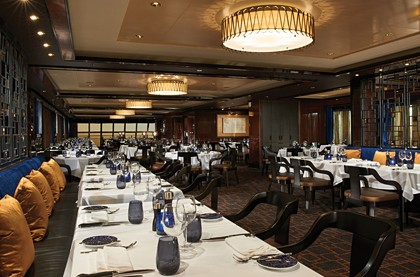 We enjoyed an Italian dinner at La Cucina. The decor enhances the authenticity of the Italian menu items. Moderno is a Churrascaria themed South American-styled restaurant where the servers come to your table to serve a variety of meats cooked gaucho-style on swords. They’ll carve directly onto your plate. Starting the meal with an immense salad bar, the servers stop by with a constantly varying selection of meat until you turn your green coaster over to the red side – time to stop. It’s a medley of flavours for your palate and a unique dining experience.

With seven nights to work with, we didn’t have time to try the Pincho Tapas bar, the always popular Teppanyaki Japanese restaurant, Bayamo featuring Latin cuisine or the unique Food Republic.  Norwegian was the first cruise line to do away with preset first and second seatings. You can dine at anytime and anywhere you want. And if you want to make a reservation; you’re welcome to do that too. 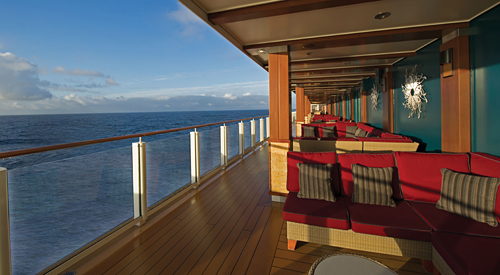 The Waterfront features comfortable seating areas
along its length

We are of the opinion that Norwegian Cruise Line is a leader in the cruise industry, both in terms of the featured guest entertainers they bring onboard to the permanent group of musicians, singers and dancers that present their nightly main stage theatre shows. After Midnight is a Broadway-style musical adapted from The Cotton Club featuring a generous selection of high energy Duke Ellington compositions. The house band distinguished themselves in their presentation of Ellington’s music. After a couple of performances, the stage was re-set for a show titled The Brat Pack, a rock n roll odyssey that brought the audience to its feet with enthusiastic applause. I also really enjoyed Howl at the Moon Dueling Pianos, a show with two singing pianists who take requests to play rock n roll hits from the audience. It’s a bit like a current version of ‘stump the band’; and judging by the packed house – very popular! We also enjoyed a dinner theatre show at The Supper Club, an intimate Vegas-style cabaret show. The calibre of entertainment is outstanding, whether it’s a vocal group called The Flyboys or a nationally recognized comedian. From solo performers to quartets to full-on theatre shows, there is quite literally something for everyone onboard Norwegian Cruise Line ships.

I’d be remiss if I didn’t mention that Norwegian Escape has a large casino and a special room for high stakes games.

Family-friendly programs for children and teens 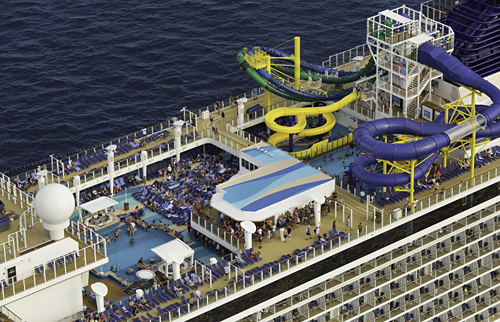 Children of all ages enjoy the water park

Recognising that families might want a little break from each other, NCL has organized activities and programs for children of different ages. The Guppies program is for children aged 6 months to 3 years. Parents can drop off their children at the Guppies Nursery or stay and play in the Guppies Playroom or join in hosted activities as a family. Splash Academy divides children into closely related age groups; 3 – 5 yrs, 6 – 9 yrs and 10 – 12 yrs and the groups are led by qualified staff. Entourage is a program for teens aged 13 – 17 yrs. When our children were young, we all benefitted from a little time apart during the course of the day. The kids liked being with a peer group and having a feeling of independence; and telling us about their adventures later at dinner.

Pampering yourself with spa treatments is easily accessible on Norwegian Escape. If you’re not in a hurry to get off the ship on a port day, the folks at the spa often offer discounts to encourage business when large numbers if guests have gone ashore. There are a variety of massages, facials, manicures, pedicures and all the other fun stuff you’d expect at a world-class spa. 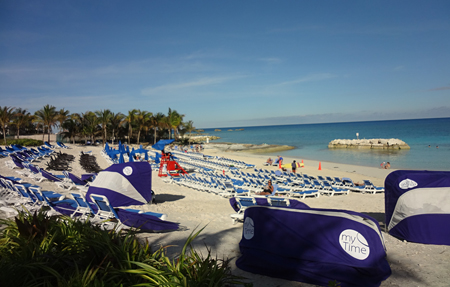 One of several beaches on the NCL private island,
Great Stirrup Cay – a highlight of the 7 day cruise

One of the main reasons for cruising is to visit different countries, island nations, and cities. Essentially you are taking your hotel with you, avoiding packing and unpacking, getting lost (men don’t ask for directions – even in a foreign country) and all the little ‘tensions’ that can mar a vacation. We recommend that at least one person in your group attends the first presentation of the upcoming ports-of-call. You’ll pick up useful recommendations to help plan your excursions.

We particularly enjoyed an afternoon on Cozumel. The catamaran sailboat we took included snorkeling and a visit to a terrific beach and water park, which had giant inflatable games and a designated swimming area. The sounds of children laughing and splashing filled the air as we swam and enjoyed the sunshine. When we visited Grand Cayman, we headed for Seven Mile Beach – an easy decision. There are 350 banks on Grand Cayman should you like to make a deposit in this international tax haven.

Norwegian was one of the first cruise lines to have a Private Island for a lovely day at the beach, snorkeling and swimming. The operation on Great Stirrup Cay has been vastly expanded over the years to add more beaches, chairs, shade ‘clamshells’ and even three-sided cabanas. There are several bars and an immense dining hall with a vast array of food choices. For people who may remember the SS Norway, the company’s first cruise ship, you’ll be happy to learn that a little bit of that lovely ship lives on in the tenders named Little Norway I and Little Norway II.

Good news folks! Starting in mid-April, Norwegian Escape will be sailing from New York to Bermuda, where she will stay three days and two nights, with relaxing sea days at the beginning and end of the cruise. We’ve cruised to Bermuda several times and it’s a fine way to visit that island of genteel civility. It’s a beautiful drive from Montreal down through the Adirondacks that you can easily do in 6+ hours, plenty of time to park at the pier and board the ship. Until then, The Escape will continue to sail a mixture of the Eastern and Western Caribbean, having lost several Eastern ports to the hurricanes last fall.

We recommend that you contact your favorite travel agent to book a cruise with Norwegian Cruise Lines. You can also book directly by visiting their website: www.ncl.com or calling: 1-866-234-7350. Bon Voyage!