From the moment I heard about the arrival of the prestigious L’Atelier de Joël Robuchon – Montréal! at the Casino I knew I just had to experience this culinary masterpiece. Well, I was not disappointed. All I could say upon leaving, was a huge “Wow.”

I am not a regular at the Casino, which is of course an absolutely beautiful and exciting facility to be at. We dropped our car at the valet and proceeded to follow the red line on the carpets up an escalator, through a long hallway and down an elevator until we arrive at our destination.

Renowned chef Joël Robuchon developed an innovative culinary concept: to offer top-drawer gourmet food that excites all the senses and serve it in a friendly and unpretentious environment. From Paris to London, Hong Kong to Las Vegas, L’Atelier de Joël Robuchon draws gourmet aficionados from all over the world. He worked in several French establishments before opening his first restaurant in Paris, in 1981 and was awarded his first star by Michelin during that first year, followed by a second and third star during each consecutive year. Three years, three stars marked a first in the gourmet world. In 1994, he opened the first restaurant bearing his name. The spirit of his work has been adapted to a variety of restaurant concepts and exceptional tables, even tea rooms and pastry shops… To this day, he has received more Michelin stars (28) than any other chef in the world 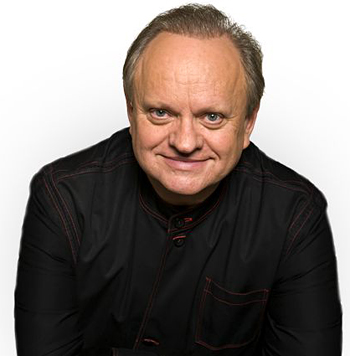 The team at Loto-Québec, which runs the Casino, went to a lot of trouble convincing Robuchon to locate one of his franchises in their flagship entertainment and gambling complex. Some employees were sent to France and Las Vegas for training while plates, cutlery and glassware were imported from Europe. Could they have just found someone locally? Perhaps yes, but Robuchon is a superstar. The Montreal Canadiens captain, Max Pacioretty is from the United States. Based on this logic, should the Habs discard their leading scorer in order to have a captain from Montreal? The Casino went for the best and upon dining there I can see why. This was truly a night to remember.

L’Atelier offers 56 seats, 36 of which are at a long counter surrounding the “workshop” section where all the action takes place. Diners have the opportunity to select a menu according to their appetite, as the great classics will be offered in small portions. We were placed at the counter and while somewhat reticent at first we quickly adapted to this spot which gave us a fascinating view of the kitchen and a team of at least a dozen chefs working away. Our server was Gerald, who first came to work for Casino in 1993. He could not hide his delight in being assigned to work at this prestigious post. “This restaurant is so famous,” he told me. “We have only been open since December and I have one customer who has already been here five times. He told me that he would travel to Las Vegas regularly just to eat at L’Atelier de Joël Robuchon. Now he can come here.”

Our sommelier was Jonathan, who really knows his stuff. Sitting at the bar gave us superb access and his explanation of each wine showed his exceptional knowledge. Jean-Michel Cartier is the Maître d`hotel sommelier and he spent the entire evening overseeing staff and interacting with every single customer. I might add that all of the staff here are exceptionally friendly and bilingual.

The kitchen at L’Atelier is being directed by personable Chef Éric Gonzalez, a rising star in Montreal’s gastronomy circles. Heading a home-grown team of culinary artists, he has been using his expertise to highlight fresh local products. The open kitchen concept provides diners with unusually close proximity to the culinary team.

For diners, the first thing to decide is whether to order à la carte or from the seasonal discovery, experience, tasting portion or vegetarian options. There is also a wonderful dessert selection.

We opted for the experience menu, which is $150 per person for seven different plates plus some of the best breads you have ever tasted. In addition, we decided to do the wine paring, which at only $75 for the two of us was quite a bargain.

First came a small basket of bread, made in bakery which was built on the premises exclusively for L’Atelier. There was a pain baguette, tasty Quebecois Alfred le Fermier cheese bread, snail-shaped bread and bacon/Dijon wheat stalk bread. “Mr. Robuchon takes his bread very seriously,” said Gerald. “That is why he built his own bakery here.”

The dinner began with a creamy foie gras royale, topped with a Parmesan and Maury “Vieilles vignes” wine emulsion. The key is to mix this up with a spoon right away. Jonathan provided a unique tip. “Dip your bacon/dijon bread inside,” he said. It was not something that came to mind, but boy was his advice right on the money. 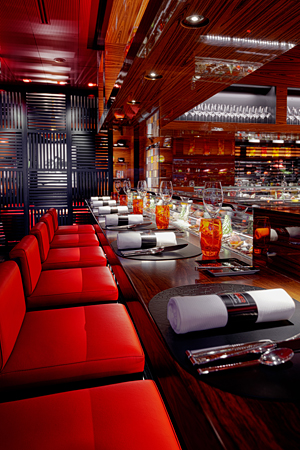 L’Oeuf de Poule “Mimosa” is an interesting dish- a hardboiled egg, opened in the middle with snow crab and caviar inside. It was very tasty indeed. Next came La Roseva; a duo with black trufflen and foie gras shavings. L’Aubergine, a vegetarian dish, featuring conflit with fine seasonings and vegetable curry. La Morue Noire, seasoned with “Malabar: black peppercorn and stewed, with baby spinach. We really liked the free-range quail, stuffed with foie gras and served with potato purée. As a bonus we also got to try Le Cochon de Lait (pig), which came with honey and spices, steamed green cabbage with smoked bacon and black truffle.

We did get to try a couple of other dessert choices: La Forêt, mushroom-shaped with small Morell cherries in Kirsch, with a crumble topping and La Bulle, a blown sugar ball with yuzu-lemon and coriander sorbet.

It is indeed employees like Cartier who make this operation tick. He told me that he met Robuchon during the 10 day period he was present a few months ago. “He is a very sweet man that keeps a gentle but firm tone of voice,” he said. “He is very respectful and mostly humble. He presented himself to every employee and treats his chefs like they were his sons and they take to heart anything he says. I have never seen a kitchen switch a dish or a way of working so fast after a couple of gentle words From Monsieur Robuchon.”

Cartier worked at Europea for almost four years and at Auberge Saint-Gabriel for another four. This is where he met Chef Gonzalez. A native of Dollard-des-Ormeaux, he now resides in Vaudreuil.

L’Atelier de Joël Robuchon –  Montréal! is located at Level A in the Pavillon du Québec. The hours of operation are 6 pm to 10 pm Wednesday, Thursday and Sundays and 6 pm to 11 pm Fridays and Saturdays. You can log on to www.robuchon-montreal.com for more details. Reservations can be made by calling 514-392-2781 or via Open Table.