The Colin and Brad Show

“An evening of interactive comedy with big belly laughs supplied by improv icon Colin Mochrie and eye candy for the visually impaired by Brad Sherwood. The most fun you can have with a theatre full of people that’s legal and doesn’t include washing up.” – Colin Mochrie

After 13 years, it is the longest running comedy tour in history. A different show every night, powered entirely by suggestions from the audience. Recently returned from a four city tour of India, it continues to sell out houses throughout North America and will be performing together, in Ireland, in the fall. Mochrie co-stars in the CW Network’s hit version of Whose Line Is It Anyway? (now in its fourth season) with Sherwood making guest appearances. 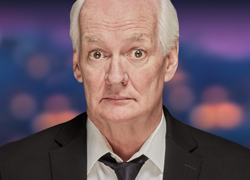 • Originally from Scotland, he’s an improviser who got his start as a member of Vancouver’s TheatreSports League
• Colin was a regular on the British show Whose Line Is It Anyway? for 8 years, before joining ABC’s version and appearing in every episode. He can now be seen on CW’s revival of the show
• Before his successful TV run with Whose Line Is It Anyway?, he toured with Second City comedy troupe

• He was a regular on the Emmy nominated hit show Whose Line is it Anyway? for 11 seasons
• His other TV credits include The Drew Carey Show, Talk Soup, The Newz, Improv-a-ganza, The Green Screen Show, This Vs. That, The Dating Game, LA Law, and The Tonight Show
• Brad’s currently touring the world in the critically acclaimed, live improv show An Evening With Colin Mochrie & Brad Sherwood