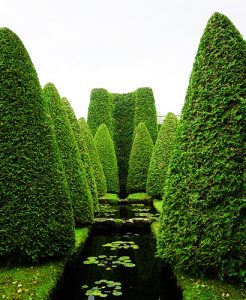 Cited as being amongst the world’s most renowned private gardens, they were created by American businessman Francis (Frank) Cabot

One of Quebec’s greatest horticultural gems, Les Jardins de Quatre-Vents or Garden of the Four Winds (also known as the Cabot Gardens, by some) will once again be open to the public this summer in La Malbaie in the Charlevoix region. However, access is strictly restricted to ticket holders and these will go on sale on May 25 at 6pm at www.lepointdevente.com. Tickets are limited so it important to note this sale date as they are known to sell out quickly.

The dates for the garden visits take place on June 25, July 9, July 23 and August 6th only. English language tours are given at 8:10, 8:40 and 11:40 am and at 12:10 pm. The other tours throughout the day are held in French and are all conducted by volunteers. All proceeds from the ticket sales go to the Centre Écologique de Port-au-Saumon. Tickets are $50 plus tax and ticketing fees, and are limited to four tickets per transaction.

Les Jardins de Quatre-Vents are amongst the world’s most renown private gardens and were created by American businessman, Francis (Frank) Cabot over several decades of passionate work. The gardens and the man himself became the subject of a well-received film, The Gardener (directed by Sébastien Chabot, 2016) which included access to the gardens as well as interviews with Frank Cabot shortly before his death in 2011 at age 86. 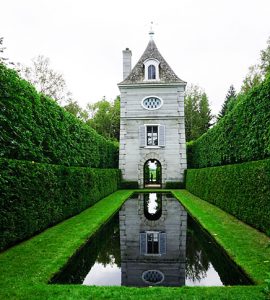 Located on rolling farmland overlooking the St. Lawrence River, touring these gardens feels like an honour and privilege as the property remains private and the gardens are truly magnificent. They are actually a collection of approximately twenty-five gardens spread over 20 acres with varied themes such as the Japanese gardens, the kitchen gardens, the sculpture gardens or focuses on particular varieties such as roses and so on.

Since Malbaie is approximately a four-and-a-half-hour drive from Montreal, it is a good opportunity to organize a weekend in the Charlevoix to go with your visit. Les Jardins de Quatre -Vents is about a ten minute drive from Le Manoir Richelieu (a Fairmount hotel). Other hotels are also nearby.