Paul McCartney is still writing and recording new songs, traveling the world on tour – even at 76. He and his crackerjack band will perform in Montreal on September 20, returning to Montreal for the first time since playing with The Beatles at the Montreal Forum. 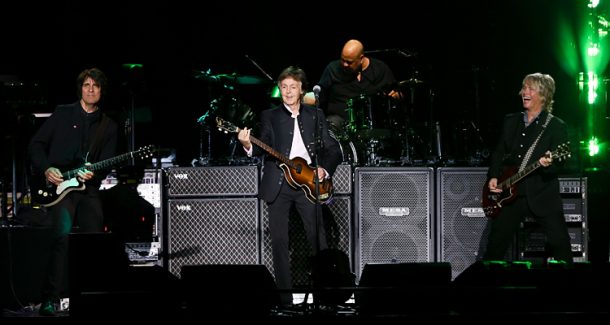 Paul McCartney was a founding member of a musical quartet that changed popular music, catapulting rock n roll bands into star status previously reserved for solo performers such as Elvis. One of the fundamental differences between The Beatles and everyone who came before was that they wrote their own songs. Sure, they performed music that had previously been recorded by American R & B artists such as Little Richard (Long Tall Sally), The Marvelettes (Please Mr. Postman) and others. But songs like I Wanna Hold Your Hand, She Loves You, Love Me Do, and other Paul McCartney-John Lennon compositions were the songs  that gave rise the hysteria known a Beatlemania.

Paul McCartney and John Lennon were arguably one of the greatest song writing teams in any era. Paul’s keen sense of melody was a perfect balance to John’s grittier rock ‘n roll. Still, Paul could belt out rock ‘n’ roll songs like I Saw Her Standing There and Long Tall Sally. He readily admits that his singing style was heavily influenced by the incendiary the American rock ‘n’ roller, Little Richard.

As a bass player, he was heavily influenced by James Jamerson who played with the legendary Funk Brothers on most of the early Motown recordings.

The staying power of Lennon-McCartney compositions is illustrated by the fact that more than 2,200 recording artists have recorded Yesterday. 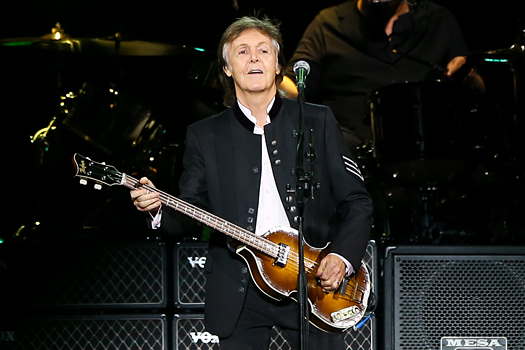 All four Beatles were made Members Of The Order of The British Empire in 1965, while Beatlemania was at its peak. Sir Paul was knighted in 1997. He’s come a long way from his middle-class background; but never lost his appreciation for his roots. “The type of people I came from, I never saw better. Presidents or Prime Ministers – I never met anyone half as nice at some of the people I know from Liverpool who … were not important of famous. They’re smart, like my dad was smart. …The kind of people you need in life; salt of the earth.”

Paul’s mother died when he was fourteen, and this was a common bond he had with John Lennon, who’d also lost his mother when he was young. Paul cites a vivid dream that he had about his mother as the inspiration for his song Let It Be. In the dream, his mother told him not to fret about her passing, that she was ok, and to ‘let it be’.

Paul’s father was a trumpet player and pianist with real life experience as a working musician and big band leader. He encouraged Paul to pursue music – and did he ever!

Not long after The Beatles break-up in 1970, Paul formed Wings with his late wife, Linda Eastman. At first, it was a way to overcome the depression he experienced after The Beatles break-up. It was with Wings that Paul wrote and recorded hits like My Love, Red Rose Speedway (both #1 in the US) and Live and Let Die for the James Bond film. Band On The Run and Venus and Mars were also big hits for the band, penned by McCartney. He credits Linda as his inspiration for writing Maybe I’m Amazed; because she helped him to regain his self-confidence and overcome his depression. Wings continued until 1981, when they disbanded, partly over disagreements about royalties – but the band may have run its course by then.

Unlike his fellow Beatles (even before George Harrison died and John Lennon was shot) Paul had a greater creative output; continuing to write songs, record and tour extensively with his trademark high-energy shows.

In addition to being an immensely popular performer and recording artist, still going strong at 76, Paul McCartney is an astute businessman, with an estimated net worth in excess of $1.2 billion US. In addition to the royalties he collects from The Beatles catalogue, he also collects royalties on songs he recorded with Wings, and his subsequent compositions. McCartney owns The Buddy Holly song catalogue, and the rights to the musicals Guys and Dolls, A Chorus Line, Annie and Grease.

He has been touring and recording with his current band since 2002, which is actually longer than he performed with The Beatles. The band includes Brian Ray, multi-instrumentalist Rusty Anderson, drummer Abe Laboriel Jr. and keyboard wonder Wix Wickens (whose command of technology enables the band to perform many complex Beatles songs penned by Lennon-McCartney). In their first year of touring, the band grossed $126.2 million. It’s been full speed ahead ever since.

McCartney has fans that span generations; boomers who came of age during The Beatles meteoric rise in the 60s, the next generation that followed Wings, and everyone combined snapping up tickets for his ongoing sold out shows. He has opened New York’s Citi Field, built to replace Shea Stadium, with three sold-out shows in 2009. In 2010 he opened the new Consol Energy Center in Pittsburgh; followed the next year with two sold-out concerts at the new Yankee Stadium in New York. His drawing power transcends Europe and North America.

Where there’s a stage, Paul McCartney will perform, whether in an arena, concert hall, stadium or television studio. He performed an acoustic duet with the equally legendary Paul Simon for the 40th Anniversary Broadcast of Saturday Night Live. He’s recorded with Alice Cooper, and even appeared in the 2017 blockbuster summer film Pirates of the Caribbean: Dead Men Tell No Lies.  Paul has also recorded with Stevie Wonder (Ebony & Ivory).

McCartney started painting in 1983, but it wasn’t until 1999 that he had his first exhibition in Germany.  The show’s seventy paintings included portraits of his musical colleagues; John Lennon, David Bowie and pop artist Andy Warhol. His first UK exhibition took place in Bristol, and included an incredible 500 canvasses. It appears that Paul McCartney’s musical artistry has opened the creative door to the visual arts. Paul McCartney Paintings is a hardcover book available on amazon.ca

Getting back to the music – Paul McCartney will perform at The Bell Centre on Thursday, September 20.