Geoffrey Kelley served the West Island riding of Jacques-Cartier as a Liberal MNA (Member of the National Assembly) from 1994 through to 2018. Prior to being elected, Geoff served as a political aide to the Ministers of Education, Municipal Affairs and Public Policy. He also served as the Chief of Staff of the Deputy Premier and the President of the Treasury Board. Geoff Kelley was well-informed about the workings of political parties and government by the time he was first elected in 1994.

Greg Kelley also worked as a political aide in several Ministries; thereby expanding on his knowledge of political life gained from sharing his father’s twenty-four years as an elected representative. Following his father’s retirement, Greg already had a solid knowledge of how parliament worked before he decided to seek the nomination for the West Island Jacques-Cartier riding. After winning the Quebec Liberal Party’s nomination, Greg went on to win the seat previously held by his father.

When asked about the Kelley family’s attraction to political life, retired MNA Geoff Kelley told me that the family’s involvement actually started with his parents; and that he, and now Greg are carrying on the tradition established by his parents. “My father was involved in politics as a riding organizer for Federal and Provincial candidates. He was a campaign chair for Clifford Lincoln. Our garage was full of campaign signs and posters during an election. We had all the retail elements of an election campaign in our garage.”

Continuing, Geoff adds. “My mom was an active volunteer, joining Ladies Auxiliaries for organizations such as The Children’s Hospital. She was also involved with Alliance Quebec during the fight to ensure the right of access to Health & Social Services in English for the Anglophone community, which was guaranteed with the passage of Bill 142.”

“We were what we called a ‘CBC household’. We listened to Peter Gzwoski on Morningside and we discussed politics, public policy and current events around the dinner table.” Fast forward to the Geoff Kelley/Judy Harper household on the West Island, and the topics of conversation are much the same. “We’re a big family with five children and six grandchildren.”

Father and son: Geoff assisting his son Greg with his cufflinks on the day he married fellow MNA Marwah Rizqy

The family grew during the summer of 2021, when Greg married Marwah Rizqy, also an MNA first elected in 2018. Before beginning her political career, Marwah was a Professor of Tax Law at the university of Sherbrooke.

Geoff is an avid cyclist, and recounted a bicycle trip he took with Greg. “We started in Brussels and went to the WW I battlefield of Ypres, through Flanders’ Fields and onto Vimy Ridge in France, where our Canadian troops showed so much courage during WW I.” When asked about other leisure activities, Geoff chuckled and said; “I guess you could say that I like the Four Bs – books, bicycles, baseball and beer. I still play in a slow pitch softball league.”

Geoff states; “My wife Judy has also been active in the community – and she continues to play an important role as the Chair of the Lester B. Pearson School Board. She taught for decades and continues her community involvement with the School Board; including the fight against Bill 40, that would abolish English-language school boards – even though they are guaranteed in the Canadian Constitution.”

Judy Kelley started her career in education by teaching English and English Literature in high schools on the South Shore. In all, she has close to forty years of teaching experience; from high school to adult education and at the CEGEP level. “I took a break for about ten years, and we had five children. After that, I started teaching again, beginning with Adult Education and then at the CEGEP level.”

While at John Abbott College, Judy served as a Commissioner of the Governance Board. “My experience in governance gave me another perspective of education.”

When the Chairperson’s position became open at the Lester B. Pearson School Board Council of Commissioners, Judy believed that her experience as an educator and governance commissioner would enable her to make a solid contribution to the Board of and the community it serves. Apparently many people had the same opinion, and Judy was acclaimed to the office in 2021.

“I ran with great humility. I love the work as a commissioner, and it’s always about what we can do for the students – to make their school experience memorable. Schools are an important part of their communities. We don’t look after curriculum, but we are responsible for the management and maintenance of the facilities. In a sense, the community and school are one.” 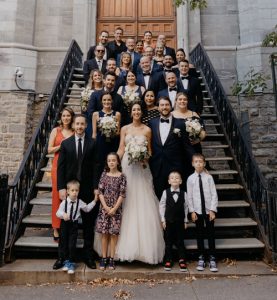 The Kelley and Rizqy families joined by Greg and Marwah

Greg picks up the conversation; “Dad was first elected when I was nine years old – so I’ve lived in a political environment for most of my life. I’ve studied history and politics; and worked as a political aide before deciding to run for office.”

Geoff Kelley studied French at Université de Montréal and obtained a Bachelor’s degree in History, and then a Master’s in Modern History at McGill. He taught at the Commission Scolaire du Lakeshore, John Abbott, Collège Marie-Victorin and at McGill; before answering the call to work as a political aide to several Liberal cabinet ministers.

“I had a great experience working as an aide to Claude Ryan when he was Minister of Municipal Affairs and Public Security from 1990 to 1994. Quebec was still living with the fallout from the 1989 Oka crisis. I participated in a meeting between Mr. Ryan and Grand Chief Joe Norton. The two men were spitting mad with each other – but they were able to communicate and agreed that a representative of the Quebec Government would visit with Grand Chief Norton. Mr. Ryan said; ‘I’ll send Mr. Kelley to visit with you’. The result was that I did listen, and was able to convey the Chief’s grievances back to Mr. Ryan. Grand Chief Joe Norton and I became good friends.” That first-hand knowledge would eventually be put to good use as Geoff Kelley served as Minister of Native Affairs on two occasions, first appointed in 2005 and then again in 2011.

Geoff continues; “Our provincial government is very important in our daily lives. Health Care and Education are provincial responsibilities. Through our local politicians, we have wonderful access to the government services. As elected representatives, we can help our constituents navigate the huge health care bureaucracy. The staff in an MNA’s constituency office can direct them to the right people in the right department to answer their questions. I see politics as a way to make things better. A good example was the role that riding offices played during the pandemic. With the rules changing to adapt to the progress of the pandemic, our riding staff played an important role in answering questions and keeping people up-to-date.”

Geoff explains his decision to seek the Liberal nomination in 1994. “I believed that the Quebec Liberal Party was the most inclusive. I still hold that view.” Greg adds; “I voted against Bill 21 (the legislation that banned the wearing of religious symbols by government employees), and I’d do it again in a heartbeat.”

Greg Kelley grew up on the West Island; was an active participant in sports programs and worked as a lifeguard in the neighbourhood pool.  He continues to play on a local ball hockey league. “Life in politics can be like living in a bit of a bubble – and I really enjoy hanging out with my friends playing ball hockey.”

Greg Kelley holds a Bachelor’s degree in History and Political Science, and a Master’s degree in Public Administration. This educational background has served him well in his political career, first as a political aide for various Ministers. Greg was the official liaison for the English-speaking community in Premier Couillard’s office. When Relations with the English-speaking Community became a Ministry led by Kathleen Weil, Greg joined her office and continued his work on behalf of the English community. “My Dad travelled all over the province in his role as Minister for Native Affairs, and I’ve had the good fortune to travel throughout the province to visit with the many English-speaking communities. Like my Dad’s experience when travelling the province; I find that there is a good level of social peace between Anglos and Francophones in the smaller communities. In one small community, the local Anglo organization had Francophone volunteers working to help protect the rights of their fellow Anglo citizens. In our experience, the wider society works better that the political society.”

Regarding Bill 96, Geoff and Greg believe that the Quebec Government should be investing in education, and not practicing the politics of division. Greg comments; “I introduced a bill to offer free French lessons to anyone who wants them. In my travels around the province – I see a generational divide on the language issue. Younger people don’t see English as a threat. They have travelled, spend time on the internet, and they haven’t lost their French. ”

Today, Greg Kelley participates on several government committees. He serves as the Official Opposition Critic for Indigenous Affairs and the Official Opposition Critic for Cybersecurity and Digital Technology. He is a member of the Committee on Agriculture, Fisheries, Energy and National Resources. He is also Vice-Chair of the National Assembly Delegation for Relations with Louisiana.